New Album Of The Week.

For nearly two decades, London-based Afro-dub pioneers Soothsayers, have been winning friends and influencing audiences with their unique brand of politically charged music at their now legendary concerts. Soothsayers have also released a number of singles, EPs and six albums since releasing their critically acclaimed debut album Lost City in 2000. Now six will become seven, when Soothsayers release Tradition on Wah Wah 45s on the ‘29th’ June 2018. Tradition is another album of powerful music with an important message from the Soothsayers and the latest instalment in the band’s history.

When the Soothsayers were founded in London nearly twenty years ago, the members of the nascent band were inspired to make music after discovering and embracing everything from Afrobeat, dub, free jazz, jazz, reggae, soul, trip hop and the music of the Two-Tone movement. Buoyed by a love of music so disparate as Marvin Gaye, Massive Attack, Miles Davis, Pharoah Saunders, Stevie Wonder, Sun Ra, The Skalites and The Specials, the Soothsayers as they made their first tentative steps onto London’s vibrant music scene.

By 2000, Soothsayers were signed to Red Earth Records and were just about to release their debut album Lost City. It featured Soothsayers’ unique band of politically charged Afro-dub, which was released to widespread critical acclaim. The success of Lost City had launched Soothsayers’ career, and both critics and record buyers eagerly awaited their sophomore album.

Buoyed by the success of Lost City, Soothsayers continued to play live and wherever they played spread their politically charged message, which over the next few years, started to  find favour with a much wider audience. However, in 2004,  Soothsayers released the first of string of singles and the occasional EP, before announcing the release of their much-anticipated album in 2008.

Eight long years after Lost City launched Soothsayers career, they returned in June 2008 with The Time Is Now. Just like their debut album, The Time Is Now was released to critical acclaim and great things were forecast for the London-based collective.

Soothsayers returned to the studio, and in 2009, they released two albums including their third album Tangled Roots. It was released to plaudits and praise in April 2009, and later that month, Soothsayers Meet The Red Earth Collective released One More Reason. These two new albums introduced Soothsayers music to a new audience as the band celebrated their first decade together.

After the success of their first collaboration, Soothsayers began work on the followup.This time, it was just the Soothsayers’ horn section that were called into action for the recording session. They played a starring role in Red Earth Dub which was credited to The Red Earth Collective Featuring Soothsayers Horns when it was released in February 2010.

Three years after the Soothsayers released Tangled Roots, they returned with their fourth album Human Nature in September 2012. It was well worth the wait and was another powerful album of music with a message from the London-based collective.

Since the release of Nothing Can Stop Us Now, the Soothsayers have continued to tour, but didn’t release any new music until they signed to Wah Wah 45s early in 2017. Later that year, Soothsayers released The Blinded Souls EP, and followed this up with the Blued Souls remix project. This saw Titeknots, Simbad and Deoke rework tracks, while Darren Jamtone contributed a dub to the Blued Souls remix project. The two Blinded Souls’ projects were a reminder of what the Soothsayers’ fans had been missing over the past few years.

By then, the members of the Soothsayers had decided that the time was right to record a new studio album, that eventually  became Tradition, which is the long-awaited followup to Human Nature which was released in 2012.

Seven of the eleven tracks on Tradition were written by Robin Hopcraft and Idris Rahman, who cowrote Tradition with Kodjovi Kush. Idris Rahman also wrote Watching The Stars with singer, songwriter and multi-instrumentalist Julia Biel. The other songs on Tradition are Sleepwalking (Black Man’s Cry) and a cover of Bob Marley’s Natural Mystic. These songs became Tradition, which was recorded in two London studios.

Recording of Tradition took place at Fishmarket and Roskit studios, where Soothsayers were joined by a few of their friends. This included Cornell Campbell, who adds the vocal on Take Me High and the album closer Natural Mystic. Once the Soothsayers and their friends completed Tradition, it was scheduled for release in June 2018.

After six long years, Soothsayers were back a new album that featured their own unique brand of politically charged Afro-dub. The message in Soothsayers’ music on Tradition is just as relevant and necessary as ever.  They examine the force that binds society together, and at the same time, builds the walls that keep people apart.  Soothsayers also examine how we relate to, and negotiate tradition which is a challenge to everyone in Britain and elsewhere in 2018. However, the big question is, is tradition a defining factor, or is it akin to comfort blanket, seemingly comforting and protecting, or is it really a threat to the future wellbeing of society? Soothsayers pondered these questions during the recording of Tradition.

Soothsayers’ horn section set the scene on the album opener Tradition, and within a few bars all is well with the world. After all, the sun is shining and Soothsayers are back with a thought-provoking and melodic slice of Afro-dub. It’s a similar case with Good Vibration, which is a paean to positivity that features powerful and poignant lyrics that are delivered by a hopeful and impassioned vocal. Heart Rules Head is a carefully crafted track where lush strings and horns augment a dub infused arrangement which features uber soulful vocals as the London-based collective spread their message. It gives way to the joyous Nothing Can Stop Us which was written by Soothsayers for Cornell Campbell.

Very different and poignant is Goodnight Rico where Soothsayers pay tribute the late Rico Rodriguez, whose best known for his work with The Specials. Sleepwalking (Black Man’s Cry) features a guest appearance by featuring label mate Dele Sosimi on a genre-melting track that is full of social comment. Everything from dub, funk, reggae and soul melt into one this irresistible sounding song. Dis and Dat which is the lead single from Tradition, and question the motives of mainstream media, politics and government during this powerful song that is full of social comment and highlights hypocrisy in Britain during 2018.

It’s all change on the dub-infused Overcome where Soothsayers celebrate the human spirit. Watching The Stars showcases Julia Biel’s beautiful, soulful sounding vocal during a song that is straight out of Kingston. Take Me High is the first of two tracks to feature Cornell Campbell’s inimitable falsetto vocal on a song about the search for spiritual enlightenment. Closing Tradition is the cover of Natural Mystic, where fittingly, reggae Cornell Campbell takes charge of the vocal during an Afro-dub cover of a song that was written by the late, great Bob Marley. By adding flutes and percussion the song is reimagined and closes Soothsayers’ comeback album on a high.

Nearly six years after their last album, Soothsayers are back and better than ever. They seem to have matured as songwriters and musicians during that period, and Tradition is a powerful and sometimes poignant album full of cerebral, thought-provoking and politely charged music. It’s sure to make the listener think about the world in 2018.

Unlike many bands, Soothsayers have a social conscience and are determined to provide a voice for those who have none. They care about the people in their local community in London, and the members of Soothsayers will often put on a concert for those that live in the neighbourhood. Soothsayers aren’t and have never been a band that lock themselves away in their ivory towers, and know exactly what’s going on in the world around them. This inspired Soothsayers when they wrote and recorded Tradition which is the best album of their career.

The lyrics on Tradition are among that best that Soothsayers have ever written during a career that has already spanned the best part of two decades. Tradition is also a carefully crafted and polished album of Afro-dub that is often soulful and sometimes funky, where Soothsayers make a welcome return with a new album of thought-provoking and politely charged music after six-year absence. 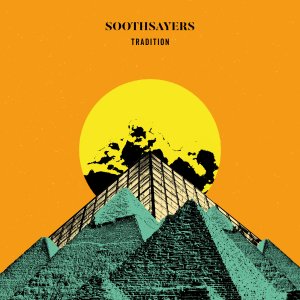