The phrase New Breed R&B was coined way back in 2001, when Adrian Croasdell was compiling a new compilation for Kent Dance. This was New Breed R&B: Soulful 60’s Blues For Today’s Dancers, which featured a selection of songs from the original Kent and Modern labels. It was scheduled for release in the summer of 2001, and not even Adrian Croasdell had any idea of the effect the new compilation would have.

When Kent Dance released New Breed R&B: Soulful 60’s Blues For Today’s Dancers was released in July 2001, it was to critical acclaim. Meanwhile, discerning soul fans welcomed this  lovingly compiled compilation with open arms, and wanted to know would there be a followup?

The answer was yes, and King New Breed Rhythm & Blues was released a year later in July 2002. It enjoyed the same success as New Breed R&B: Soulful 60’s Blues For Today’s Dancers had a year earlier. Despite that, nobody realised that this the New Breed R&B series would become eventually one of Kent Dance’s most successful compilation series.

That was despite it being the best part of six years before this occasional compilation series made a welcome return with New Breed R&B With Added Popcorn in February 2008. The compilation series that had been missing in action for too long, was back with a bang as it celebrated the music played on the Belgian Popcorn scene.

After the release of the third volume in the series, noting was heard of the New Breed R&B compilation for over four years. However, in April 2012 King New Breed R&B Volume 2 was released, and hailed as one of the highlights of this occasional compilation series.

Buoyed by the success of King New Breed R&B Volume 2, Kent Dance released New Breed Blues with Black Popcorn in April 2013. It was a case of feast of famine for fans of the New Breed R&B series.

Having enjoyed two compilations in the space of two years, the best part of three years passed before New Breed Workin’: Blues With A Rhythm was released in January 2016. This was the sixth instalment in the series which began in 2001 .That was something to celebrate.

Now just two-and-a-half years later, Kent Dance have decided to celebrate the success of one of their longest running compilation series’ with New Breed R&B which was recently released on vinyl. It features fourteen tracks, including some of the highlights of this long-running and successful compilation series. This includes tracks from Luther Ingram, Johnny “Guitar” Watson, B.B. King, Gladys Bruce, Barbara Perry, The Phillips Sisters, Bobby Mitchell and Albert Washington and The Kings. There’s also tracks that make their debut on New Breed R&B series, including Prince Conley’s Hard Times (Every Dog’s Got His Day, Sterling Magee’s You’re Supreme and Johnny Gosey’s Double Locks on this vinyl celebration of New Breed R&B.

There’s no better way to open New Breed R&B than with Luther Ingram’s Oh Baby Don’t You Weep which made its debut on New Breed R&B With Added Popcorn in 2008. This bluesy, soulful floor filler was originally a favourite on the Belgian popcorn scene, but nowadays, is guaranteed to fill any dancefloor.

In 1964, Austin Taylor released Can’t You See I’m Busy as a single on the Sprout Artist label. Tucked away on the B-side was Nat Lewis’ Why Oh Why which was arranged by Jimmy Bailey. It’s a driving and soulful slice of early sixties R&B that has matured like a fine wine.

Another single from 1964 is Johnny “Guitar” Watson I Say, I Love You which was released on King. It’s a hook-laden uptempo track that will entice even the most reluctant dancers onto the dancefloor.

Having released The Jungle as a single on Kent in February 1967, B.B. King watched as his latest release reached ninety-four in the US Billboard 100 and seventeen in the US R&B charts. Meanwhile, curiosity had gotten the better of many record buyers who flipped over the B-Side and discovered the delights Long Gone Baby and discovered a glorious soulful dancer from the man they called Blues Boy King.

Way back in May 1961, Mike Pedicin released Burnt Toast and Black Coffee as a single on the Federal label. It’s a hugely popular dance track that is guaranteed to get any party started.

Prince Conley recorded Hard Times (Every Dog’s Got His Day for the Stax imprint Satellite Records in 1961. Despite featuring a heartfelt, soulful vocal and a mid-tempo arrangement that has made in Memphis written all over it, Satellite Records never released the song. It lay in the vaults until 1995, where it made a welcome debut on the latest instalment in The Stax Sessions’ series, 4000 Volts Of Stax and Satellite.

Johnny Gosey’s tale of struggling to pay the rent Double Locks, made its debut on Kent Harris’ R&B Family when it was released in 2012. This hidden gem from Johnny Gosey makes its debut on vinyl on New Breed R&B.

Barbara Perry’s A Man Is A Mean Thing is another track that featured on the Kent Dance’s 2008 compilation New Breed R&B With Added Popcorn. It’s another irresistible, hook-laden dancer that is a favourite on the Belgian popcorn scene.

Sterling Magee has had what can only be described as an eventful career. In the sixties, he recorded with Jesse Stone and Al Sears at Sylvia Records, and later was signed to Ray Charles’ Tangerine Records and ABC Records. Sadly, some of Sterling Magee’s career spent busking on the streets of New York, and later, he appeared alongside U2 in a video. However, one of Sterling Magee’s most memorable moments was the stomping, sultry and soulful You’re Supreme.

Closing New Breed R&B is I’m The Man by Albert Washington and The Kings. It featured on the B-Side of their cover of Otis Redding’s These Arms Of Mine which was released as a single on Fraternity in January 1966. On the B-Side was the Albert Washington composition I’m The Man which was produced by Ray Allen. It’s soulful, bluesy and dancefloor friendly song that is truly memorable and closes the compilation in style.

Releasing six instalments of the New Breed R&B series was something that was well worth celebrating, and there was no better way to this than with a “best of” that spanned ten years of the series. Even better, Kent Dance, an imprint of Ace Records decided to release New Breed R&B on vinyl, which was something of a masterstroke.

After all, many soul fans love vinyl, and believe that no better way to listen to the music. This includes New Breed R&B which will also appeal to the new generation of music fans just discovering the delights of vinyl. Some may not have heard the previous instalments in the New Breed R&B series, and this could be the start of a musical voyage of discovery.

There’s the six instalments in Kent Dance’s lovingly compiled compilation and successful compilation series which is still going strong seventeen years. The success of New Breed R&B is down to compiler Adrian Croasdell and his impeccable musical taste which he showcases on the recently released vinyl version of New Breed R&B. 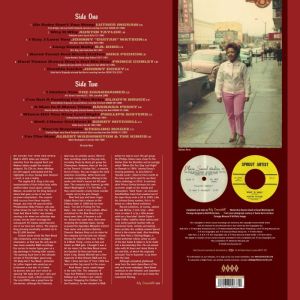 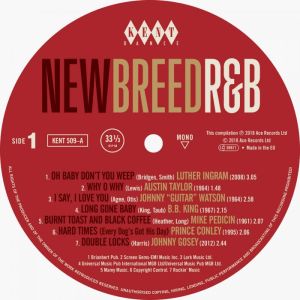 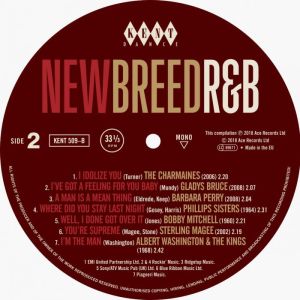