Recently, Berlin-based Ale Hop, who is one of Peru’s leading composers and experimental electronic musicians released her new album Bodiless on Lima-based Buh Records. Bodiless is a carefully crafted collection of nine new songs that feature Ale Hop’s trademark complex pop arrangements. However, Bodiless is quite different from Ale Hop’s previous releases, as the songs were inspired by the landscape and radio drama. These influences can be heard on Bodiless, which is the latest project from Ale Hop, whose career has blossomed over the past decade.

Twenty-one year old Ale Hop joined the Lima-based all-female electronic pop band Pestaña in 2006. Pestaña was a group that didn’t take themselves too seriously, and described their music as electro stupidity with punk attitude. They showcased their inimitable sound on the Three Way CD which was released in 2007 and featured songs by Pestaña, Alive and Delicado Sonico. However, later in 2007 Ale Hop decided to part company with Pestaña, and it wasn’t long before she joined a new band.

This was Las Amigas De Nadie which was a new indie band that formed in Lima in 2008. The four piece band made their live debut, but it would be two years before they released their debut EP. Before that, Ale Hop embarked upon a new career.

By 2009, twenty-four year old Ale Hop was regarded as a talented, up-and-coming composer and musician in her native Peru. That was why she was commissioned by Interbank to write the score for one of their adverts. This was the first of many scores to adverts, internet campaigns, television programmes and films that Ale Hop would write over the next decade.

In 2009, Ale Hop also wrote the score to the short film Resta El Vacio, which was directed by Ricardo Ayala. Ale Hop’s score was the perfect soundtrack to the short film, and it wasn’t long before she was asked to write another film soundtrack.

Ale Hop’s next commission was to write the soundtrack to the documentary El Niño Del Cuzco, which was once again directed by Ricardo Ayala. It was released in 2010, the same year that Las Amigas De Nadie made their debut.

Buoyed by the success of Las Amigas De Nadie’s debut album, Ale Hop returned to the world of soundtracks, and began work on two new projects. She wrote the score to the documentary La Noche de Jhinna and the short film La Mala. Both projects were released in 2012, and Ale Hop’s career as a composer was going from strength to strength.

Meanwhile, 2013 was by far one of the busiest and most successful years of Ale Hop’s career, as she worked on a number of different projects. She provided the score to an internet campaign, starred in the film What Difference Does It Make? A Film About Making Music, provided the score to Ricardo Ayala’s short film Publica and won the residency at the Red Bull Music Academy in New York. However, 2013 was also the year that Ale Hop embarked upon a solo career when she released La Guerra Invisible. This was a tantalising taste of what was to come from Ale Hop as a solo artist.

Despite embarking upon a solo career, Ale Hop continued to work with the Lima-based indie band Las Amigas De Nadie, and they released their sophomore album Human Dress in 2014.  It was released to plaudits and praise and later, was nominated for the Best Album of The Year in Peru. This was something to celebrate. However, it was a case of so near yet so far for Las Amigas De Nadie. Human Dress proved to be the band’s swan-song, and the band split-up in 2015.

Following the demise of Las Amigas De Nadie, Ale Hop became one half of the new experimental pop duo Mother Sun in 2015. Still, Ale Hop spent much of her time writing scores and working on so projects, including during 2015.

It was another important year for Ale Hop who turned thirty in 2015. She had been working on two projects, including writing the score to Hector Delgado’s short film Cumulo. Ale Hop also released another groundbreaking solo project Pangea, which was released on DVD by Buh Records. It was nominated for the Best Experimental Album in Peru, but yet again it was a case of close but no cigar.

This was a disappointment for Ale Hop, but writing her first full length film score must have softened the blow. She had been commissioned to write the score to Videofilia: Y Otros Síndromes Virales which was directed by Juan Daniel F. Molero and released in 2016.

By then, Ale Hop was had many written scores to many films, television programs, adverts and internet campaigns. This she was able to do in tandem with her solo career and the other projects that she was working on.

One of these projects was The Way Of Love which was a collaboration between Ignacio Briceño and Ale Hop. It was released to critical acclaim in 2017, and later, was nominated for the Album of The Year in Peru. However, once again, it was a case of so near yet so far. This might be about to change in 2018.

This includes the landscape, after Ale Hop made a series of field recordings  whilst she was traveling around South America. Some of these field recordings feature on tracks on Bodiless. The other source of inspiration for Ale Hop was radio drama. It’s provided Ale Hop with a narrative thread for several of the songs on Bodiless which is another ambitious album of groundbreaking music.

Bodiless is best described as a genre melting album where Ale Hop combines elements of disparate musical genres. This includes abstract pop, ambient, avant-garde, experimental electronic music, industrial music and even hints of synth pop. The result is an album of cinematic music that sets the listener’s imagination racing.

Bodiless opens with Bodiless, Pt. I (Matter and Resistance) which meows, beeps and squeaks, before becoming mesmeric and dramatic as Ale Hop crafts a cinematic track that sounds as if it belongs on the soundtrack to a short film. It meanders along, the complex, multilayered arrangement gradually revealing its secrets as bells ring, drums add a dramatic backdrop and sci-fi synths are unleashed. Later, the arrangement a whispery vocal shares its secret as the drums crack and beeps and squeaks emits a code, before the arrangement to this ten minute cinematic opus becomes understated as it draws to a close.

Found sounds combine with synths and an ethereal vocal on Today, which is one of the shorter songs on Bodiless. Soon, a guitar shimmers and combines with a myriad of samples and dubby vocals. Sounds assail the listener from another complex arrangement during this captivation and laid-back, languid track.

Samples of dialogue open Migration Data before futuristic sounds emerge from the arrangement. It’s as if the man machine has awaken and is lurching into life as Ale Hop paints pictures with this cinematic track that says more than ten thousand words.

Even the title As You Seek Faintly the Shore conjures up pictures in the mind’s eye. Bubbling synths and a guitar combine as a haunting, elegiac vocal that soon becomes dubby. Later, machine gun drums are unleashed briefly as Ale Hop crafts a melodic and memorable fusion of experimental electronic music, avant-garde and synth pop.

Otherworldly describes the introduction to Bodiless, Pt. III (Cosmic Ocean) before clanking industrial, Faustian sounds are added to the soundscape. So too is a deliberate and dramatic vocal, that is delivered against an understated and otherworldly arrangement that clanks and meanders along. Later, futuristic and sci-fi sounds punctuate the lysergic arrangement, which clanks and crackles along but is strangely melodic and continually captivates.

A myriad of samples and field recordings combine with keyboards and synths during Home Jpg, which is another filmic sounding track from Ale Hop. Her uses of samples plays an important part in this poignant sounding track which for many people will be a snapshot of home.

At nearly seven minutes, Bodiless, Pt II (Ritual VS. Indiscriminate Felling) is another of the longer tracks on Bodiless.  As it gradually unfolds, a mesmeric backdrop accompanies lo-fi and sci-fi synths and various futuristic and industrial sounds. There’s a lot going on during this complex, multilayered arrangement, and continually, sounds assail the listener. It sounds as if sound sculptor Ale Hop is creating the soundtrack to a sci-fi film, If she was, it would be guaranteed to set the listener’s imagination racing.

While Therubberboom.jpg is just two minutes long, it leaves a lasting impression. Here, Ale Hop combines shrill synths, a piano and samples which she combines with dialogue. It sounds as if it’s an excerpt from a film, and sometimes, effects are added to the dialogue which distorts and becomes dubby. Other times, bursts of sci-fi synths, industrial sounds and samples are combined as Ale Hop weaves another dramatic, cinematic track.

As the arrangement You which closes Bodiless meanders along, gradually revealing its secrets, Ale Hop delivers a slow, deliberate and sultry vocal. Meanwhile, industrial and percussive sounds combine with synths and harmonies. Together, they ensure that Bodiless closes on a high, and leaves the listener wanting to hear more from Ale Hop.

Ale Hop’s much-anticipated new album Bodiless was recently released by Lima-based Buh Records, and is available as a cassette or digital download. Bodiless is a carefully crafted album, and features nine new songs that were inspired by the by the landscape and radio drama. These influences are apparent on Bodiless which is an ambitious and innovative genre-melting album from Berlin-based Ale Hop.

She combines a variety of disparate musical genres on Bodiless, including abstract pop, ambient, avant-garde, experimental electronic music, industrial music, musique concrète and even synth pop. These genres are seamlessly combined on Bodiless, by Ale Hop who earlier in 2018 graduated from the Universität der Kunst Berlin with a MA in Sound Studies. This Ale Hop added to the BA in Art History from the Universidad Nacional Mayor de San Marcos. However, nowadays, most of Ale Hop’s tine is spent making music which she’s been doing since 2006.

Twelve years later, and Ale Hop has been written the scores to adverts, internet campaigns, television programs and films. She’s also been  a member of Pestaña and Las Amigas De Nadir, and nowadays, is one half of the experimental pop duo Mother Sun. However, in 2012 Ale Hop embarked upon a solo career and is known for creating groundbreaking music. Proof of that is her new album Bodiless, which is an ambitious, innovative  and sometimes cinematic  genre-melting album from Berlin-based Ale Hop who is a musical pioneer with a big future ahead of her. 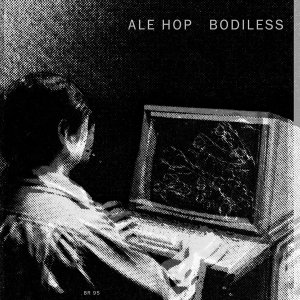 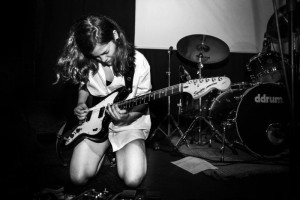 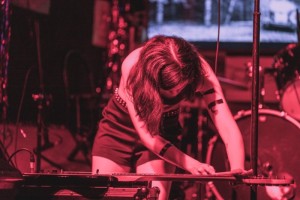