Romanian author Nico J. Genes wrote in her book Magnetic Reverie: “follow your dreams, let them guide you. Who knows where they may take you.” This is what Kat Frankie decided to do in 2004, when she gave up her job in Sydney, Australia, and left her family and friends behind, to travel half way round the world to Berlin, Germany, where she embarked upon a career as a singer-songwriter. That was a huge gamble for Kat Frankie bit it paid off, and she’s now a successful singer-songwriter who has just released her fourth album Bad Behaviour, on the Berlin-based label Grönland Records. However, that is just part of the Kat Frankie story, which began 10,000 miles from Berlin.

Kat Frankie  was born and brought up in Sydney, and has been singing since she was a child. Songwriting came later, and she recorded her first compositions onto a tape and sent them to grandmother. This was Kat Frankie first recording, and wouldn’t be her last.

By the time she was a teenager, Kat Frankie had graduated to singing R&B songs, and she remembers: “Boyz II Men were huge role models of mine.” However, at that time, it looked unlikely if Kat Frankie would be able to pursue a musical career.

Sadly, Kat Frankie’s parents weren’t able to pay for music lessons, and certainly couldn’t afford to by a guitar or piano. The only musical equipment Kat Frankie had access to, were two tape decks. This allowed Kat Frankie to practice her beat-boxing. Even now she remembers what she used to do: “I would record a beat on one cassette, then play it and sing along with it while recording it on the second cassette.”

This is the technique that Kat Frankie still uses. However, she’s incorporated a loop station which is her favourite piece of equipment, and allows her record a chorus, accompany herself or even to play a one-woman guitar duet. However, up until Kat Frankie was seventeen, this wouldn’t have been possible.

Kat Frankie was a latecomer to the guitar, and only started to playing when she was seventeen. Maybe that is why Kat Frankie hasn’t embraced the guitar like many singer-songwriters have? That was despite the guitar kickstarting her musical career.

At the time, Kat Frankie was studying design, and playing in pubs in Sydney. “I played guitar and sang songs, some angry, some sad–it was totally cliché.” Soon, Kat Frankie was enjoying a degree of success, which prompted her to quit her job and travel 10,000 miles to Berlin. The big question her friends and family must have wanted to know was why Berlin?

“I was a big fan of Chicks on Speed. In an interview they said Berlin was the best place in the world to make music, and I believed them.” So in 2004, Kat Frankie relocated to Kat Frankie and moved to Berlin.

When Kat Frankie arrived in Berlin, the antifolk scene was thriving. So much so, that antifolk was the most popular musical genre in Berlin’s eclectic and vibrant music scene. It was a scene that Kat Frankie became part of, almost by accident.

Having arrived in Berlin where she knew nobody, Kat Frankie met singer-songwriter Kitty Solaris, who also owned the Vitamin record label owner. Kitty Solaris had been influenced by the Velvet Underground, Patty Smith and Catpower, but had honed her own unique and inimitable style. She also knew what it took to make inroads into the Berlin music scene, and decided to take Kat Frankie under her wing.

Three years after arriving in Berlin, Kat Frankie was part of antifolk scene which was still thriving, and was preparing to release her debut album on Kitty Solaris’ Vitamin label. This was Pocketknife, which was released in 2007. By then,  Kat Frankie had come a long way in a short space of time. However, when she looks back at this time and the antifolk scene Kat Frankie says: “that’s how I slipped into that scene back then, although it didn’t suit me at all. Antifolk always has this cutesy, superficial quality to it, whereas I always wanted to be truthful and write emotion-laden songs.”

Kat Frankie was an accidental antifolk singer who deep down, wanted to follow in the footsteps of PJ Harvey, Tom Waits and Rufus Wainwright who were her role models. The “cutesy, superficial” antifolk scene was soon in the past, and as Kat Frankie plotted the next stage in her career she remembered a quotation from Hamlet: “to thine own self be true.”

When Kat Frankie came to record her sophomore album, she had added a loop station to her musical arsenal. “It is such a simple device, but you can do so much with it! On the one hand it felt like going back to my childhood, but the vocal harmonies I could sing with myself allowed me to venture into completely new styles.” The resulting album, Dance Of A Stranger Heart was released on Frankie Kat’s new label Zellephan in 2010, three years after she released her debut album Pocketknife. Dance Of A Stranger Heart was a much more eclectic album and saw Kat Frankie move in new directions. This continued on her third album.

Just two years later, Kat Frankie returned in 2012 with Please Don’t Give Me What I Want which was released on Kat Frankie’s Zellephan label. It was the start of a new chapter in Kat Frankie’s career, which she remembers well: “on the one hand it felt like going back to my childhood, but the vocal harmonies I could sing with myself allowed me to venture into completely new styles.” This included the R & B and soul that Kat Frankie had listened to when she was a teenager. The music from her past played a part in the success of her third album Please Don’t Give Me What I Want which was the most eclectic album of Kat Frankie’s career.

Despite releasing two album in the space of two years, another five years passed before Kat Frankie returned with her fourth album. During that period, she worked on various side projects including playing guitar in Olli Schulz’s backing band. Kat Frankie also write

Get Well Soon, which became the theme tune to Schulz and Böhmermann’s talk show. Then in 2016, Kat Frankie was one half of the duo Keøma who competed in the preliminary rounds of the Eurovision Song Contest. Later in 2016, Kat Frankie’s backing vocals sweetened the Erfurt-based rapper Clueso’s single Wenn du Liebst.

All this was a learning process for Kat Frankie, who realised that the life of a singer-songwriter is quite different to mainstream pop artists. Kat Frankie’s realised this after her short dalliance with mainstream as part of Keøma. She  wrote, recorded, played the synths  and produced the songs within the digital audio workstation Ableton Live. The time that Kat Frankie spent working on the Keøma project she regards as part of life’s rich tapestry. “Everything I do propels me forward; I never want to stop learning.”

Kat Frankie enjoys working on new and disparate projects, which allow her to widen her skill set. Unlike many musicians, she manages to move almost effortlessly between projects and is regarded as someone whose easy to work with and a talented musician. That is apparent even after one listen to Kat Frankie’s fourth album Bad Behaviour which was released on Grönland Records.

Bad Behaviour shows a different side to Kat Frankie. “I never wanted to be just the sad girl with a guitar,” and she has set about reinventing herself on Bad Behaviour. There’s always been two sides to Kat Frankie’s music, the sad and sombre and the bright and joyous. However, never before has Kat Frankie dared to combine the sides until Bad Behaviour which is her first album in five years. It’s also an album that is full of surprise aplenty.

Kat Frankie explains: “I didn’t want to be the least bit melancholic anymore. This new album was a joyous album; I wanted to be a bit obnoxious… Somehow there’s just not a good German word for that.”

That may be the case. However, the easiest way to explain Kat Frankie’s decision to change direction, is that she wants to challenge the expectations of those who have followed her career since the release of Pocketknife in 2007. They were in for a surprise when they bought Bad Behaviour and pressed play. Suddenly, power riffs, rasping horns and a pitched up vocal that is accompanied by a  “Californian hippie” chorus. Incredibly, Kat Frankie managed to record all this using her loop station, rather than a cast of thousands.

Using her guitar, loop station and a vocal that can breathe life, meaning and emotion into lyrics, Kat Frankie recorded Bad Behaviour which is a captivating album that is akin to embarking upon a new relationship. Bad Behaviour is also a very intimate album, where Kat Frankie writes about love,  suffering from love and the joy of loving. Sex is also another the threads that runs through Bad Behaviour. In fact, Kat Frankie admits that: “I have never made an album as loaded with sex as this one is.”

Despite that, the intimacy and images of togetherness, Bad Behaviour is still a romantic album. Other times, Kat Frankie is introspective as she seems to look deeply into psyche. Elsewhere on Bad Behaviour, Kat Frankie takes time to reflect and ruminate. Sometimes she looks at the bigger picture, and the current political  picture in public. All this is a long way from the “cutesy, superficial” antifolk scene,” that a younger Kat Frankie once inhabited. That was in the past, when  Kat Frankie’s recording career was in its infancy.

Now Kat Frankie is an experienced recording artist with four albums to her name, including her most recent album Bad Behaviour. It’s a groundbreaking, genre-melting album where Kat Frankie combines elements of pop, R&B and folk on this carefully crafted album. It features surprises aplenty during the ten tracks. This includes the  harmonies that sounds as if they belong on a classic doo-wop single. Still, Kat Frankie continues to be influenced and inspired by the music that she listened to during her formative years.

This music can be heard throughout the ten tracks on her career-defining fourth album Bad Behaviour. It literally oozes quality from the opening bars of Bad Behaviour right through to the closing notes of Spill. In between, Kat Frankie breathes meaning and emotion into the lyrics  to Home, Forgiveness, Headed For The Reaper, The Sun and Back To Life on this powerful, poignant and melodic album.

Her fourth album Bad Behaviour which was recently released by Grönland Records, is an album to explore embrace and enjoy.  Bad Behaviour features a truly talented songwriter Kat Frankie, who left her home in Australia in 2004 to follow her dreams. This has paid off and fourteen years later, Kat Frankie is at the peak of her powers and has just released her career defining album Bad Behaviour. 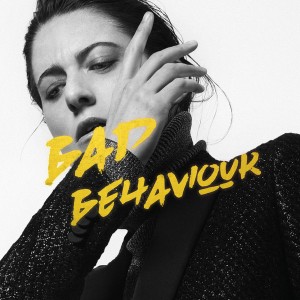