Over the last few years, some of the most ambitious and innovative new music being released in Europe, has been in Norway, which has a vibrant and thriving musical community. However, this didn’t happen overnight, and instead, it took years for Norway to become home to some of the most inventive, innovative and influential musicians in Europe. This includes the twelve members of Norwegian supergroup Skadedyr who are about to release their third album Musikk on Hubro Music on the ’27th’ of July 2018. The release of Musikk! is the latest chapter in the Skadedyr story, who can trace their roots back to 2010.

That was when a new Norwegian group Your Headlights Are On released their debut single Diskobar on the ’23rd’ of October 2010. Diskobar whetted listener’s appetite for the group’s genre-melting sound that featured elements of jazz, pop and rock.

From the ashes of Your Headlights Are On, came Skadedyr, which Heida Karine Johannesdottir Mobeck and Anja Lauvdal were determined to make a success of. They became the driving force behind, and brought together what is a twelve strong Norwegian supergroup.

Having founded Skadedyr, Heida Karine Johannesdottir Mobeck and Anja Lauvdal went looking for some of Norway’s most talented and innovative musicians. Given this was a golden era for Norwegian music they were absolutely spoilt for choice. The founders of Skadedyr took weighed up their choices, and after much consideration, they brought onboard members of Broen Osk, Karokh, Moskus, Skrap and Hullyboo. The result was a Norwegian supergroup. However, this was no ordinary supergroup.

Instead, Skadedyr describe themselves as an anarchist-democratic band. This makes Skadedyr stand out from the crowd. So does the fact that there’s twelve members of Skadedyr.

These twelve musicians play what can only described as an eclectic selection of instruments. This includes a brass, string and rhythm section. However, even Skadedyr’s rhythm section is unlike most other bands and features two drummers. They’re joined by guitars, keyboards and even an accordion. Skadedyr is unlike most bands, and best described as a pioneering collective of top avant-garde musicians whose recording career began in 2013.

On the ‘4th’ of October 2013 Skadedyr released their much-anticipated debut album Kongekrabbe it was to plaudits and praise. Skadedyr’s debut was hailed as an ambitious and innovative genre-melting album where they fused elements of ambient, electronica, experimental, free jazz and even hints of industrial and Krautrock on Kongekrabbe. Meanwhile, the five soundscapes on Kongekrabbe  were atmospheric, cinematic, crystalline, dramatic, ethereal and evocative. Kongekrabbe was a tantalising taste of one of Norway’s most exciting up-and-coming bands.

The critical acclaim and commercial success of Kongekrabbe was also proof that Skadedyr’s alternative approach to making music worked. When Skadedyr was  founded, they were keen to stress that the band was a musical democracy where everyone had their say in the music making process. That had been the case during the making of Kongekrabbe, with the twelve talented and innovative musicians all having their say and making music their way. This had worked and now the members of Skadedyr were keen to build on the success of Kongekrabbe.

Buoyed by the success of Kongekrabbe, Heida Karine Johannesdottir Mobeck and Anja Lauvdal who had founded Skadedyr, were keen to begin work on the band’s sophomore album. There was only one problem, getting the twelve band members in the one studio at the same time.

Eventually, the members of Skadedyr’s schedules meshed and they entered the studio to record their eagerly awaited sophomore album Culturen. For the recording session, Morgan Nicolaysen replaced Andreas Mjøs who had produced Skadedyr’s debut album Kongekrabbe. This could quite easily have been a case of too many cooks spoil the broth.

It found Skadedyr reinventing  their music on Culturen, where they fuse elements of avant-garde, electronica, experimental, folk, free jazz and post rock. So does brass band, jazz and musique concrète on an album that veers between atmospheric, dark, dramatic and eerie, to ethereal, joyous and melodic. Other times, the music was minimalist and understated, but can quickly, become urgent, futuristic and otherworldly. Sometimes, the music becomes melancholy and wistful,  but has an inherent beauty and continually captivates. After three years away, Skadedyr had returned with what was their finest hour. Critics and their growing fan-base were already looking forward to Skadedyr’s third album. 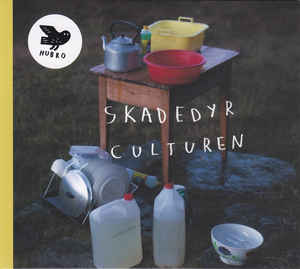 This time, there wasn’t going to be a three-year gap between albums. and Skadedyr headed to Studio Paradiso on September the ‘11th’ 2017. Over the next two days the twelve strong group recorded five soundscapes.

This included the Hans Hulbækmo compositions Kallet, Festen, Hage Om Kvelden and Musikk! They were joined by Frampek which was written by Skadedyr and Portrett which was penned by Adrian Løseth Waade, Marius Klovning, Torstein Lavik Larsen and Øystein Aarnes Vik. These tracks were recorded by Skadedyr at Studio Paradiso.

With the album recorded, Lasse Marhaug mixed and mastered Musikk! was ready for release. However, the release date was scheduled for the ’27th’ of July 2018 when finally, critics and  their fans can hear more of Skadedyr’s Musikk!

Opening Musikk! is the title-track where rattling drums and percussion combine with a wailing Santana-inspired guitar and droning keyboards. As cymbals rinse, the bass and guitar are unleashed and horns rasp as Skadedyr play with abandon and freedom. When harmonies are added, it’s inevitable that there will be comparisons with Alice Coltrane in her musical prime. Meanwhile, a searing guitar and pounding drums are added as this fusion of free jazz, rock and spiritual jazz reaches a crescendo. After that, the soundscape becomes subdued  as jangling percussion combines with horns that belong in a brass band while the leftfield percussive sounds and strings are joined by a scatted vocal and rattling sound. They’re part of an ambitious genre-melting soundscape that also features elements of avant-garde, country, experimental and musique concrète. It’s also melodic and continually captivates and it’s impossible to second-guess Skadedyr as they throw curveballs a plenty during this cosmic, lysergic and meditative twelve-minute epic.

A myriad of disparate leftfield sound combine with a rasping, squealing horn on Frampek. It’s played with freedom before the drums are played with urgency and are joined by a fleet-fingered bass and scatted vocal. This is music, but not as we know it as Skadedyr push musical boundaries to their limits during what’s like a cosmic free jazz jam. Soon, a wheezing accordion and scratchy strings join the frae as it reaches a crescendo. Meanwhile, a wistful tuba and ethereal vocal are added as disparate sounds assail the listener. They range from elegiac to industrial and liturgical before the arrangement explodes and drums power the genre-melting arrangement along. It speeds up and slows down, before drones, braying horns, a haunting vocal and scratchy strings play part in what’s a truly ambitious and innovative soundscape.

Rueful describes the horn that opens Kallet before plink plonk keyboards give way to the horn. It’s played in an unorthodox way, as wailing, squealing sounds are emitted. Meanwhile, bubbling, gurgling and rustling sounds can be heard and later, a guitar is played in an equally unorthodox way. Sometimes, it sounds detuned, while other times it’s played with accuracy and urgency as it jangles, while the horn rasps and brays. They’re joined by an accordion, jangling percussion, bass, piano crashing cymbals and sweeping strings which add the final piece of the jigsaw, as this alternative Nordic symphony becomes melodic as it sweeps and sways.

As Festen unfolds, it shows different sides of Skadedyr. Their rhythm section sound like a tradition jazz band during the golden age of jazz. That is apart from the introduction of an electric bass which adds scampering runs. Soon, the piano is played with freedom and other members of Skadedyr embrace free jazz. Later, a gypsy violin and scatted jazzy vocal are added. So are an array of leftfield sounds, while the guitar takes the track in the direction of fusion. It’s joined by wheezing horns, rueful strings and keyboards as Skadedyr seek inspiration from and combine elements of jazz from the past and present. In doing so, they create one of the highlights of Musikk!

Portrett is the shortest track on the album and allows Skadedyr to improvise. Lars Ove Fossheim toys with his guitar and it’s as if he’s contemplating channeling the spirit of Jimi Hendrix. Meanwhile, droning. clanging, clicking and rasping sounds provide a backdrop as Lars Ove Fossheim continues to toys with his guitar and tease the listener. He doesn’t unleash any spellbinding solos, but improvises and experiments during this short, but intriguing soundscape.

There’s wistful sound to the piano that opens Hage Om Kvelden. It’s a similar case with as the horn, which is joined by a jangling, shimmering guitar. Meanwhile, the wistful piano is mesmeric as the horn provides the perfect foil. However, it’s replaced by the tuba,  drones and harmonies as a degree of drama is added. Later, Skadedyr’s replicate the sound of a brass band as cymbals crash and otherworldly sounds are added. Still, the piano plays a leading in the sound and success of what’s another of the highlights of Musikk!

Two years after the release of their critically acclaimed sophomore album Culturen, Skadedyr return with their third album Musikk! It’s without doubt Skadedyr’s first hour as the twelve piece Norwegian democratic supergroup reach new heights. They also continue to push musical boundaries to their limits, and sometimes, way beyond on Musikk! Unlike many groups, the members of Skadedyr are risk takers and seem determined to release music that is ambitious, bold and challenges the listener. It sometimes takes them out of their comfort zone, but they’re rewarded during what’s an ambitious and innovative album of genre-melting music.

Skadedyr who are freewheeling, twelve piece mini orchestra that feature musical free spirits who want to shakeup music, and take it in a new direction. This they do throughout the five soundscapes on Musikk! Skadedyr continue in their mission to mix and match musical genres as they create ambitious, challenging, exciting, innovative and melodic music for the ‘21st’ Century.

While Norway has one of the most vibrant and eclectic music scenes  in Europe, Skadedyr is a very different group and have establishing a reputation for doing this their own way. Proof of this are the five soundscapes on Musikk! It finds Skadedyr bowling curveballs aplenty, springing surprises and sometimes combining the most unlikely sounds and instruments during their third album Musikk!, which is the Norwegian supergroup’s Magnus Opus.