The day that Mary Love  entered a talent contest in a local club was that the day that her life changed. She sang a cover of Etta James’ Somebody’s Got A Hold On Me and won. This resulted in Mary being hired to sing every Thursday.

She was paid $8 a night and accompanying Mary Love were The Vows who she had befriended. They were her friends and were protective of Mary.

The next big break came when Sam Cooke’s manager J.W. Alexander heard Mary sing and gave her his card. The next day, J.W. Alexander and Mary Love met. He offered Mary the chance to sing on demos. This was her opportunity to make a life for herself.

Having started singing demos, Hal Davis heard Mary singing, and liked what he hear. Here was a singer potential and talent, and he signed Mary Love to Modern Records. The only problem was her name. It was Hal Davis who came up with the name Mary Love, which he thought was a better name for a singer. The newly named Mary Love signed to Modern Records and recorded twelve tracks between 1965 and 1968.

Fitting, Lay This Burden Down opens with Mary Love’s debut single for Modern Records You Turned My Bitter Into Sweet and featured the beautiful paean I’m In Your Arms on the B-Side. When Lay This Burden Down was released in April 1965, and went on to become one of Mary biggest hit singles. The single sold especially well  around the Los Angeles area, and this was enough to launch Mary Love’s career. Since then, You Turned My Bitter Into Sweet has become a favourite in the UK’s Northern Soul scene, and nowadays, is regarded as a Northern Soul classic.

Four months after the release Mary’s debut single, You Turned My Bitter Into Sweet, I’ve Got To Get You Back was released as Mary’s sophomore single in August 1965. Mary’s vocal sounds like Diana Ross on this uptempo dancer that later, became a favourite on the UK Northern Soul scene. Tucked away on the B-Side was the hidden gem Hey Stoney Face which features an emotive vocal from Mary. On its released I’ve Got To Get You Back sold well in the Los Angeles area, but failed to find an audience further afield. Sadly, this would be a familiar story for Mary Love, apart from Move A Little Closer.

Mary Love’s next single was the soulful dancer Lay This Burden Down, which featured Think It Over Baby on the B-Side. It’s almost too good for B-Side as braying horns and piano accompany Mary’s hopeful and needy vocal. Despite the quality of both sides, Move A Little Closer didn’t build on the success of Move A Little Closer when was released in October 1966. Although it was hit locally, but failed to trouble the charts. This was a disappointment for Mary Love.

So was the commercial failure of the Ashford and Simpson penned Baby I’ll Come when it was released in January 1967. It finds Mary mixing power, passion and emotion on what’s one of her best singles. Hidden away on the B-Side is another hidden gem, Satisfied Feeling. Mary Love is at her most soulful on this stomper and delivers a powerhouse of a vocal. Sadly, after this, Mary would only release one more single for Modern Records.

She did release a duet with Arthur Adams, Is That You. He seems to bring out the best in Mary Love, but sadly, the single which doesn’t feature on Lay This Burden Down flopped. This brought to an end her time at Modern Records.

During her time at Modern Records, Mary Love divided her time between her solo career and singing backing vocals. She was one The Ikettes, and also accompanied Vernon Garrett and Lowell Fulson. However, Mary was determined to make a success of her solo career.

Not long after this, the B-Side, If You Change Your Mind, started getting radio play. It was released nationally on Josie, reaching number forty-six in the US R&B Charts. For Mary this was her second most successful single. Despite this, another three years passed before Mary released her next single.

Ironically, it was back in Sacramento that Mary Love met John W. Cole, who was a friend of Mary’s grandparents. He was a businessman, who ran a chain of chemist and record shops. John wanted to expand his business interests and decided to enter the music business.

Fortunately, John W. Cole knew Roger Spotts, who played alongside Johnny Otis and Shuggie Otis, who were both hugely talented musicians, arrangers and producers. It was agreed that Roger Spotts would and arrange Mary’s next single Mary Love penned There’s Someone For Me, which was recorded at Ray Charles’ Los Angeles studio.

That day the great Ray Charles took charge of engineering and helped out as Mary Love delivered a beautiful, soul-baring vocal on There’s Someone For Me, which featured Born To Live With Heartache on B-Side. Both sides of this 1971 single, which was released on Elco are among some of Mary’s finest work. Sadly, history repeated itself when the single flopped. This resulted in Mary taking time out from the music industry.

It wasn’t until 1975 that Mary Love returned to music full-time. For the past four years she had been raising her family and sometimes sang in nightclubs. However, during this break from recording, Mary Love had hung out with Lou Rawls, Barry White, Willie Hutch and Dennis Edwards. Through her friendship with comedian, Rudy Ray Moore, Mary landed a part in the Blaxploitation movie Dolemite.

Appearing as herself, Mary Love sings When We Start Making Love and Power Of Love which were part of the soundtrack released on Generation Records. That would be the last we heard of Mary for a couple of years.

When Mary Love returned, she was featured in another film. This time it was Rudy Ray Moore’s Petey Wheatstraw-The Devil’s Son-In-Law. Mary Love penned five tracks for the film soundtrack, which was released on the Magic Disc label. The songs ranged from  included the gospel-tinge Joy and Loving You to the disco inspired Petey Wheatstraw. Still commercial success still eluded Mary Love. This resulted in Mary moving in a different direction,

After this, Mary spent three months living in Osaka, Japan, where she was part of Ah Sweet Tastes. They released a single Keep On Dancing, where Mary sings in Japanese and English.

On her return home, Mary Love released a cover of Tit For Tat in 1982. This was followed two years later by Save Me in August 1984, which marked the end of era for Mary Love as she turned her back on secular music.

The Gospel Years and Commercial Success.

Turning her back on secular music, Mary Love became one of America’s most successful gospel singers. When Thankful was  released in 2000, it was certified platinum, while 2002s Incredible and 2005s Mary, Mary were both certified gold. Somewhat belatedly, Mary Love was at last enjoying the success her voice and undoubtable talent deserved. This commercial success was on Mary’s terms.  Sadly, Mary Love passed away on June the ‘23rd’ 2013, aged just sixty-nine.

That day, soul music had lost one of its greatest female vocalists. Although Mary Love didn’t enjoy the commercial success and critical acclaim her music deserved, her music is popular throughout the world, especially in Britain, where Mary was always a welcome visitor and is sadly missed.

The recent release of Lay This Burden Down on vinyl by Kent Soul, an imprint of Ace Records, is a welcome addition to any record collection. It features the twelve sides Mary Love recorded for Modern Records and two songs from later in her career. This includes 1987s Come Out Of The Sandbox and 1988s The Price which closes the album.

Despite that, Mary Love released the best music of her career at Modern Records. It features on Lay This Burden Down which is fitting homage to one of soul’s finest female singers, Mary Love. 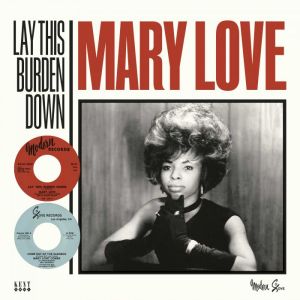 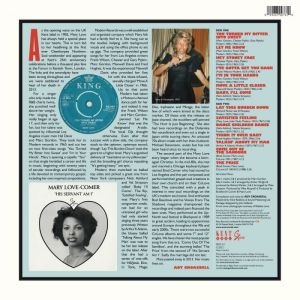 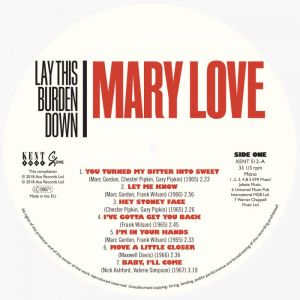 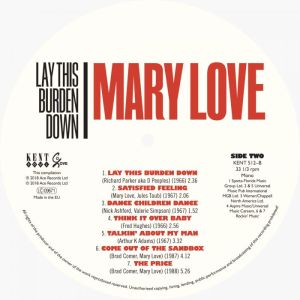