Sadly, not every influential and innovative band enjoys a long and illustrious career, and instead, their career is short-lived. That was the case with the groundbreaking Peruvian rock band El Polen who released just two albums between 1972 and 1973. This includes their debut album Cholo (Música Original De La Banda De Sonido) and their sophomore album Fuera De La Ciudad which was recently released on Buh Records on vinyl. This is a welcome reissue of a groundbreaking album from one of the most important Peruvian rock bands of the late-sixties and early seventies,

The El Polen story began in 1969, when brothers Juan Luis and Raul Pereira decided to form a new band. They had decided that their new band would head in a new direction and make music that was different to their previous band,  the Pereira brothers realised that Peruvian music was about to change.

By 1969, the first wave of new Peruvian  bands were combing beat music and surf sounds, which they played at Matinales which were concerts that took place on a  Sunday morning. These concerts were always popular, and so were the bands that took to the stage. However, the music was starting to sound tired, and yesterday’s sound. What Peruvian music needed was a revolution.

Juan Luis Pereira who was part of the burgeoning hippy movement, realised this, and with his brother Raul formed El Polen, and set about reinventing music in the new Peru. It was a very different country since 1968, and it was an exciting time for the Pereira brothers as they started their new band.

Peru was transformed in 1968, when a nationalist government was established by Juan Velasco Alvarado. This brought to an end the oligarchic state, which had previously ruled Peru. Suddenly, many people started to migrate from the country to the city, seeking a new life in the new Peru.

This coincided with new Andean singers and bands playing concerts in Coliseums located on the outskirts of cities. Many within the audience were those who had migrated from the country to the city, and they enjoyed the concerts that they attended.

Meanwhile, their was an upsurge of interest in Andean music, and sales of new recordings increased. The Andean sound which had first been recorded and promoted by Jose Maria Arguedas by the late-forties was growing in popularity. Soon,  new bands were being formed and Andean sound became more popular than ever and the Peruvian musical industry expanded. However, Juan Luis and Raul Pereira had their own plans for Peruvian music.

As the sixties, gave way to the seventies, Juan Luis and Raul Pereira realised that the fusion of beat music and surf sounds many bands had been playing was yesterday’s sound and no longer as popular as it had once been. It was time for Peruvian music to change. The Pereira decided to fuse the sound of today with some of the music that they had heard growing up.

This included classical music, Peruvian waltzes and huaynos, which had influenced and moulded the Pereira brothers in their formative years. So did Andean folklore music which would become part of El Polen’s sound. They were about to combine Andean music, folk rock and psychedelia, and this new genre-melting was  groundbreaking. Nobody had ever tried this before and the members of El Polen were about to become musical pioneers.

By then, the members of El Polen had been on a journey which would help them improve as musicians and spiritually. El Polen had traveled to Cusco, where they learned more about Andean instruments and musical traditions. This was they saw as part of their continuing musical education, and having gathered new knowledge, El Polen began the next part of this two-part journey.

It took El Polen to Santa Eulalia high in the mountains above Lima, where they examined their burgeoning spirituality. After this, the members of El Polen were ready to change Peruvian music forevermore.

By then, the hippy movement had exploded in popularity as Peruvian music fans embraced psychedelia and sought altered states of consciousness. With the new hippy generation enjoying and embracing the new, alternative lifestyle and psychedelic music El Polen had a captive audience.

When El Polen took to the stage, they sought to eliminate the boundaries between rock and huayno. To do this, they deployed acoustic guitars, a cello, mandolin, percussion and quenas, as they combined Andean music, folk rock and psychedelia. This proved popular, and soon, El Polen was at the forefront of a new musical movement that was blossoming in Peru.

Given their popularity, it was only a matter of time before El Polen came to the attention of one of the Peruvian record companies. Virrey won the signature of El Polen who soon, began work on their debut album.

For their debut album, El Polen was asked to write the soundtrack to the film Cholo (Música Original De La Banda De Sonido), which was based on the life of the famous Peruvian Soccer Player Hugo Sotil.

It was a game-changer of an album, and Cholo (Música Original De La Banda De Sonido) proved not just to be innovative, but also influential. El Polen paved the way for other bands to fuse Andean music and rock and would influence several generations of bands and musicians. 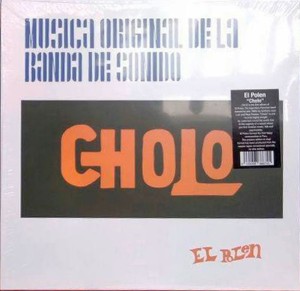 When El Polen entered the studio, they were no longer a six piece band any more, and their lineup had changed. It featured lead guitarist, harpist and vocalist Juan Luis Pereira and his brother Raul who played rhythm guitar, Quena and took charge of the vocals. They were joined by violinist Fernando Silva and percussionists Ernesto Pinto and Cuto Vásquez who also played mandolin. Gradually, Fuera De La Ciudad started to shape, and it wasn’t long before the album was completed. El Polen were about to make history once more.

Critics on hearing Fuera De La Ciudad in 1973 recognised the quality of what was another which innovative genre-melting album. However, they didn’t realise that Fuera De La Ciudad was a game-changer of album and that would inspire and influence two generations.

Ironically, this was apparent from the uptempo album opener Concordancia, where  El Polen combine blues, folk rock and traditional Peruvian instruments. Sweeping, swirling strings , a  bluesy harmonica and  mandolin accompany a beautiful  soul-baring vocal. By comparison Mi Cueva has a much more tradition Andean sound.This is because of the choice of instruments during what’s a haunting sounding fusion of folk and traditional Andean music. Strings sweep as the joyous sounding A Las Orillas Del Vilcanota unfolds and reveals its secrets. What follows is an irresistible mixture of the traditional Andean music and folk.

From the get-go, there’s a degree of drama during the fourteen minute epic El Hijo Del Sol. It’s cinematic and rich in imagery, even before the choir, harpsichord  and pizzicato strings are added. Later, folk, folk rock and traditional Andean music combine as the tempo and drama increase on this ambitious, innovative and genre-melting Magnus Opus, which is El Polen’s finest moment on Fuera De La Ciudad. It closes with La Puna a slow and ruminative sounding track where traditional Andean instruments take centre-stage as Fuera De La Ciudad closes on a high.

Despite that, two generations of Peruvian musicians were influenced and inspired by El Polen’s sophomore album Fuera De La Ciudad which has just been reissued on vinyl by Buh Records.

El Polen managed to revolutionised Peruvian music in the space of just two albums. This included Fuera De La Ciudad a groundbreaking and genre-melting album from El Polen, who looked as if they were about to enjoy a long and illustrious career.

Sadly, two years after the release of Fuera De La Ciudad a El Polen split-up in 1975. By then, many bands would follow in El Polen’s footsteps, after being influenced by Cholo (Música Original De La Banda De Sonido). These albums were regarded as  turning point for Peruvian music, and revolutionise Peruvian music forevermore and in the process.

Nothing more was heard of El Polen for twenty-one years, until they made a comeback in 1996. Three years later, self-released their third album Signos E Instrumentos. Sadly, not long after releasing their first album in twenty-six years El Polen split-up once again.

Fifteen years later, in 2014, there was an El Polen reunion, as they rolled back the years. Sadly, that was the last that was heard from one of the most important groups in the history of modern Peruvian music.

El Polen certainly made their mark on Peruvian music during the six-year period between 1969 and 1975. During this period, they released two ambitious and innovative albums Cholo (Música Original De La Banda De Sonido) in 1972, and followed this up with Fuera De La Ciudad in 1973 which was El Polen’s second classic album