Having signed to Creation Records in 1991, Teenage Fanclub proceeded to pull  a musical rabbit out if the hat when they released their third album Bandwagonesque on the “19th” of November 1991. Bandwagonesque was an award-winning, game-changer of album by Kings of Jangle Pop,Teenage Fanclub who came of age musically.

It was a time to celebrate for the boys from Bellshill, who had managed to extract themselves from their contract from Matador by presenting them with the hastily recorded The King. This could’ve backfired if Matador believed that Teenage Fanclub had deliberately produced  uncommercial and unrepresentative work. They didn’t, The King was a commercial success and this allowed Teenage Fanclub to release Bandwagonesque which has just been reissued by Song music. Bandwagonesque was the start of a new chapter  for Teenage Fanclub, the Creation Records’ years.

For those unfamiliar with the geography of Scotland, Bellshill, is a small town twelve miles from Glasgow, where Teenage Fanclub were  born in 1989. The nascent band emerged out of Glasgow’s C86 scene, and had been inspired by West Coast bands like The Beach Boys and The Byrds. Another major influence on Teenage Fanclub were Big Star, who Teenage Fanclub would be later be compared to.

Unlike Big Star, Teenage Fanclub was a quartet, whose original lineup featured  guitarist Norman Blake, lead guitarist Raymond McGinley, bassist Gerard Love and drummer Francis MacDonald. From the early days of the band, Norman Blake,  Raymond McGinley and Gerard Love who were Teenage Fanclub’s three principal songwriters shared lead vocal duties. That was the case when they came to record their debut album A Catholic Education for Creation Records.

Just a year after the band was founded, Teenage Fanclub released their debut album in 1990. A Catholic Education would later be described as a quite un-Teenage Fanclub album. The music was dark, harsh and peppered with cynicism and controversy.

Most of the controversy stemmed from Teenage Fanclub’s decision to turn their sights on Catholic church. For a band from a city divided by religion, that was a controversial move, and one that could alienate people. What made the decision to “attack” the Catholic church, was that Teenage Fanclub prided themselves on being apolitical band. The other surprise for a band who admired The Byrds, The Beach Boys and Big Star was the sound of A Catholic Education.

Just two months after the released of A Catholic Education, Teenage Fanclub returned with what was meant to be their sophomore album, The King. However, in reality, The King was a quickly assembled collection of tracks.

The tracks that became The King had been recorded once Teenage Fanclub had completed what would be their third album, Bandwagonesque. Quickly, Teenage Fanclub recorded nine tracks, including covers of Madonna’s Like A Virgin and Pink Floyd’s Interstellar Overdrive. Once The King was recorded, Teenage Fanclub were hoping this would allow them to discharge heir contractual obligations to Matador. This plan could have backfired.

Teenage Fanclub owed Matador an album, and as long as Matador accepted The King, then they had fulfilled their contractual obligations. Th only problem was there was a  possibility that the album could be rejected, if Matador didn’t believe the album was of a certain commercial standard.

Fortunately, they didn’t. That was despite covers of Madonna’s Like A Virgin and Pink Floyd’s Interstellar Overdrive. The King wasn’t exactly Teenage Fanclub’s finest hour, but despite this, Matador released in August 1991.

Reviews of The King weren’t favourable, but despite this, Teenage Fanclub’s sophomore album reached fifty-three in the UK charts. This was ironic as very few critics thought that The King would even trouble the charts. Teenage Fanclub had the last laugh, and free from all encumbrances, they signed to Creation Records. 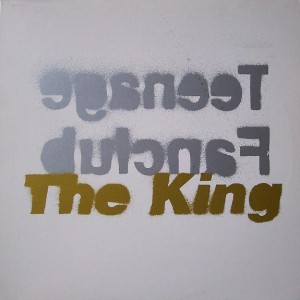 Now signed to Alan McGhee’s Creation Records, Teenage Fanclub like a magician pulling a rabbit from a hat, delivered the completed version of Bandwagonesque. It had been recorded at Amazon Studios, Liverpool, between the ‘9th’ April to the ‘12th’ of May 1991. Bandwagonesque featured twelve songs which saw Teenage Fanclub come of age musically.

Just like previous albums, songwriting duties were split between the band members. Raymond McGinley wrote I Don’t Know and Norman Blake penned The Concept, What You Do to Me, Metal Baby and Alcoholiday. Meanwhile, Gerard Love had written December, Star Sign, Pet Rock Guiding Star and Is This Music? Gerald Love then joined forces to write Sidewinder, while the only track credited to Teenage Fanclub was Satan. These twelve tracks would find Teenage Fanclub maturing as songwriters and musicians.

On Bandwagonesque Teenage Fanclub’s trademark ‘sound’ began to take shape. It had been influenced by The Byrds and Big Star. Byrdsian, jangling guitars were joined by close, cooing, harmonies and a melodic fusion of indie rock and hook-laden power pop. Seamlessly, though, Teenage Fanclub could switch between laid back and melodic to a much more powerful, rocky sound. This would find favour with critics and record buyers.

Especially when Star Sign was released in August 1991, and reached number four on the US Modern Rock charts. Meanwhile, Star Sign stalled at just forty-four in the UK. The followup The Concept, a rocky anthem, reached a disappointing fifty-one in the UK, but reached number twelve on the US Modern Rock charts. Teenage Fanclub’s music was finding an audience in America for the first time. Maybe Teenage Fanclub’s third album would find them cracking America for the first time?

That was the case. When Bandwagonesque  was released on 19 November 1991, it reached number twenty-two in the UK, and 137 on the US Billboard 200. This meant that Bandwagonesque was Teenage Fanclub’s most successful album of their nascent career.

As 1991 drew to  close, Teenage Fanclub were going places and enjoying their newfound fame as the Creation Records’ Years continued. 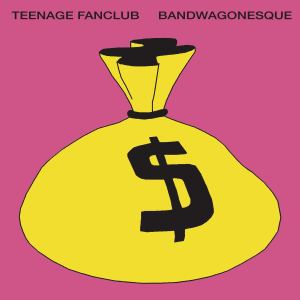 The Creation Records was when Kings of Jangle Pop, Teenage Fanclub, released the best music of their career. This began with Bandwagoneque, when musical magicians Teenage Fanclub pulled an indie classic from  their hat. The was a game-changer for Teenage Fanclub.

This was just the start for Teenage Fanclub whose carer was about be transformed over the space of three albums. When the Big star inspired Thirteen was released in November 1993, it failed to win over critics but became their most successful album when it reached fourteen in Britain.

That was until eighteen months later, in May 1995, when Teenage Fanclub released another minor classic Grand Prix, which reached number seven win Britain and  became their most successful album.

Twenty-one years later, and with the benefit of hindsight, Teenage Fanclub released the finest music of their four decade at career at Creation Records. This includes Bandwagoneque, Grand Prix and Tales From Northern Britain which are the perfect introduction to Scotland’s very own Kings of Jangle Pop,  Teenage Fanclub.

They came of age on Bandwagoneque which was inspired by The Byrds and Big Star. Teenage Fanclub’s award-winning  combination of Byrdsian, jangling guitars  close, cooing, harmonies and a melodic fusion of indie rock and hook-laden power pop was a potent and heady brew. Especially as they sseamlessly,  switched between laid back and melodic to a much more powerful, rocky sound on Bandwagoneque which is  Teenage Fanclub’s first minor classic and of the greatest indie albums of the nineties.