Nowadays, Northern Soul compilations are two-a-penny and  hardly a week goes by and yet another compilation is released. That has been the case for the best part of twenty years and nothing has changed during 2018. It seems that Northern Soul is more popular than, ever and record buying pubic has an insatiable appetite for floaters and dancers.

The only problem is that many of the compilations are third-rate, and are just attempts to cash-in on Northern Soul’s popularity. That is the case whether it’s the cheap budget label releases or the budget breaking box sets.

My advice is: “don’t believe the hype.” Especially when they come baring the words “featuring songs played at the Wigan Casino or Blackpool Mecca.” These words seem to suggest that the compilations ooze quality. Alas, all too often, that is not the case.

Having been played at the Wigan Casino or Blackpool Mecca isn’t a guarantee of quality. Far from it. There’s several ways to separate the wheat from when the chaff, when it comes to Northern Soul compilations. Who compiled the compilation is hugely important. So, is the label that released the compilation. Some labels have established a reputation for releasing quality Northern Soul compilations. Others are just jumping on the bandwagon, looking to make a quick buck. They neither care about the music, nor the people that made it. However, labels like Ace Records do.

In 1967, The Antellects released Love Slave  as a single on the Flodavieur label. It’s a soulful dancer that was discovered in the nineties and has become a favourite of dancers and DJs,

A welcome addition to Northern Soul’s Classiest Rarities is Karmello Brooks’  1966 single Tell Me, Baby. This jazz-tinged  single was a released on the New York based Milestone Records and changes hands for several thousand pounds.

Sherrie Matthews wrote It’s Written All Over My Face, which Marva Holiday released on as single on GNP Crescendo in September 1968. Sadly, the single failed to find the audience it deserved, but nowadays is a cult classic.

Even today, Jeanette Jones is still one of soul music’s best kept secrets. She was signed to the Golden State label, where she recorded Cut Loose. It was eventually released in 2000 on the Golden State Soul compilation and features an emotive vocal powerhouse from Jeanette Jones who had the potential to enjoy a long and successful career.

Another unreleased track is I Only Cry Once A Day Now which The Fidels recorded in 1968 for Dore. It features a big production where strings and horns accompany a soul-baring vocal. Sadly, this hidden gem lay unreleased until Northern Soul’s Classiest Rarities Volume 6 was released in 2017.

Closing side one is Eddie Whitehead’s 1967 single  Just Your Fool which was released on the Ohio-based Black Jack label. Although the single wasn’t a commercial success, this soulful floater later became a favourite on the Northern Soul scene.

Salt and Pepper were a multiracial group GI’s based in Bangkok who spent most of their time playing gigs for tourists, fellow GI’s and locals. Eventually, Salt and Pepper pooled their resources and recorded and released a A Man Of My Word as a single. It was pressed in Thailand, and the Heatwave label released between 250 and 500 copies of this rare soul  hidden gem.

Mississippi born TY Karim’s career began in the sixties and spanned three decades. In  1965, she released You Just Don’t Know on the Romark label. Sadly, this  hook-laden single failed to find an audience but is now a favourite on the Northern Soul scene.

In 1966, Pat Powdrill released the Goffin-King composition I Can’t Hear You as a single on  the Dowey label. Tucked away on the B-Side was the uptempo dancer Do It, which was designed to test the stamina of dancers.

When Mary Saxton released Is It Better To Live Or To Die on he Canadian label Pace, Gary S Paxton arranged and produced both sides of the single. This included Losing Control which Gary S Paxton wrote with Jan Saxton. It’s an underrated song, with Mary Saxton sounding like a young Tina Turner.

Closing Northern Soul’s Classiest Rarities Strange Neighbourhood which was released on the Fraternity label by The Imaginations in 1967. It’s another uptempo dancefloor filler that closes the

While other compilers are happy to rehash the same tracks for the umpteenth time, Ady Croasdell knows that there’s still mountains of soulful delights awaiting discovery and that it’s just a case of discovering them. Like a musical man from Del Monte, Ady Croasdell goes in search of hidden gems for the Northern Soul’s Most Classiest Rarities series. Some of these make a welcome appearance on the lovingly curated Northern Soul’s Classiest Rarities, which  latest instalment in Kent Dance’s long-running and successful series. 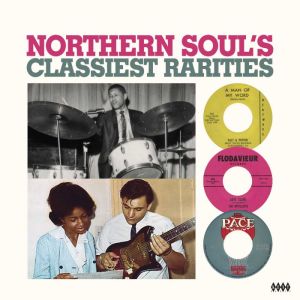 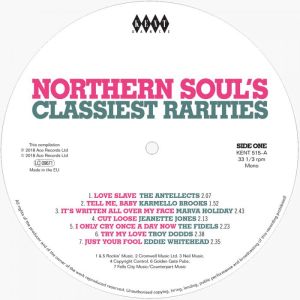