FOR THE ARCHIVES VOLUME 2 COMPILED BY VOLCOV.

From The Archive Volume 2 Compiled By Volcov.

Compilation Of The Week.

Since the release of the first instalment in the series, Enrico Crivellaro a.k.a. Volcov has been busy with his own Neroli label. It’s been going strong for two decades and since the release of From The Archive Volume 1 Compiled By Volcov, has released album s Dego  Lars Bartkuhn, Trinidadian Deep and Alton Miller. However, it’s not running a label and curating compilations that keep Volcov busy.

Volcov is also a globetrotting DJ, whose known for his eclectic sets. However, Volcov’s musical roots are once apparent o this jazz-tinged compilation that features multiple musical genres from several continents.

Volcov explains why he’s chosen the tracks on From The Archive Volume 2 Compiled By Volcov: “the spirit and the sound of this album follows the first volume: choosing more songs that i thought were overlooked and deserved more attention. This time, with such a crowded marketplace for reissues and compilation of 70s-80s music, I decided only to focus on songs from the last 10-15 years.”

From The Archive Volume 2 Compiled By Volcov includes a couple of tracks that have never before released on vinyl. This includes Harry Whitaker’s Afterlife Volume 2 and Ron Trent’s, Ori Space. These two tracks are part of a truly eclectic compilation .

There’s everything from futuristic jazz, intimate downtempo soul and dancefloor friendly sounds on From The Archive Volume 2 Compiled By Volcov.

From The Archive Volume 2 Compiled By Volcovt opens with All That Glitters which  was written and produced by Carleen Anderson and featured on her album Cage Street Memorial The Pilgrimage. It was  released in 2016 by Freestyle Records. All That Glitters with its beautiful intimate downtempo soul is the perfect way to open the compilation and sets the tone for what follows.

Collective Peace’s piano led Let The Music Play was originally a CD only Detroit release in 2016. It has another understated arrangement that meanders  along as the ethereal vocal which is augmented by harmonies takes centre-stage. The only way to describe Let The Music Play is a spellbinding hidden gem.

The Rebirth recorded Caterpillar for their album Being Thru The Eyes Of A Child which was released in 2015. Futuristic, lysergic, dreamy and melodic descries Caterpillar.

Ten years ago, in 2008, Ron Trent released  a CD only album Cinematic Travels-Ancient/Future. One of the highlights is Ori Space which sounds like a tribute to the legendary and innovative French violinist Jean-Luc Ponty.

One of music’s best kept secrets in Andy Bey, who  released the cult classic Experience and Judgment in 1974. This one of many albums that Andy Bey has recorded, and they’ve influenced many  musicians including Intuit who joins forces with  Andy Bey on the Planet Birth. The version included is the Volcov Edit of Xantone Blacq Remix. It’s another genre-melting which elements of electronica, hip hop, jazz and soul of a song that veers between smooth and soulful to experimental.

Quentin Kane and Simon Sheldon wrote, arranged, produced and performed The Blue Room which features TK Blue. The version on the compilation isKaidi Tatham’s Shokazulu Remix which was released in 2016 and guaranteed to fill a dancefloor,

The IG SOS Mix of Numbers’ Moonblood was released in 2001. It’s regarded as a West London Co-Op classic and seventeen years later, is a real rarity,

Josh Milan wrote I Put A Spell On You which he produced with Louie Vega. It was recorded by Honey Sweet and features Cindy Missile and released in 2015. Its jazz-tinged electronica with a powerhouse of a vocal and snares that play an important part in the mix.

Skymark released Finding The Peace on Volcov’s Neroli label in 2012. It’s a futuristic, space-age jam from the Spanish producer Skymark.

Harry Whitaker wrote and produced The After Life Part 2 which is  a truly memorable jazz dance track from 2008.

Volcov Edit’s of Tony Williams Lawra closes From The Archive Volume 2 Compiled By Volcov. Lawra was released in 1980 and is taken from the soulful slice of fusion from the album Play Or Die.

From The Archive Volume 2 Compiled By Volcov. 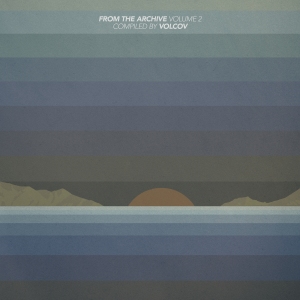