Nowadays, not many bands stay together thirty years, but Motorpsycho who are one of Norway’s top bands have. They’re proof that longevity isn’t a thing of the past in the music business. Nor is releasing an album a year. That was common in the sixties and seventies, which for many people was the golden age of rock.

Sadly, nowadays, very few bands come close to releasing an album a year. Instead, many bands spend several years working on an album. However, there is one band still that average almost an album a year, Motorpsycho, who have just released their new album The Crucible on Rune Grammofon. It’s their twenty-second album and marks the welcome return of Motorpsycho and is the much-anticipated followup to The Tower. The Crucible Is the perfect way for Motorpsycho to celebrate thirty years of making music.

Motorpsycho were formed in Trondheim, central Norway in 1989. Since then, Motorpsycho have become a musical institution. They’re now veterans of the Norwegian music scene, and continue to influence a new generation of musicians. These new bands aspire to follow in the footsteps of Motorpsycho.

They’ve come a long way since releasing their debut album Lobotomizer in 1991. Since then, Motorpsycho have been a prolific band, averaging nearly an album a year. This includes studio albums, live albums, mini albums and collaborations. These albums have been released to critical acclaim and commercial success.

That is almost an understatement. Since the release of their fourth full length album Timothy’s Monster in 1994, Motorspycho’s last sixteen albums have reached the top ten in the Norwegian charts. Motorspycho’s music has also found an audience across Europe, with their albums regularly charting in Belgium, Germany and Holland. They’re also a hugely popular live band, and are familiar faces across Europe and further afield. Motorpsycho it seems, are one of Norwegian most successful musical exports.

Meanwhile, back at home in their native Norway, Motorpsycho have scooped some of the most prestigious musical prizes. This includes an Edvardprisen and four Spellemannprisen Awards. These are the Norwegian equivalent of a Grammy Awards. Winning a Spellemannprisen is a huge honour. Most groups are lucky to be nominated for one award. So far, Motorpsycho have won four. It would be no surprise if Motorpsycho added to that number. Especially when they continue to release albums of the quality of The Crucible, which Is the perfect way for Motorpsycho to celebrate thirty years of making music.

The Crucible was recorded at Monnow Valley Studios in Wales, during  August 2018 and saw drummer Tomas Järmyr, bassist and vocalist Bent Sæther and guitarist and vocalist Hans Magnus Ryan co-produce the along with Andrew Scheps and Deathprod. With five co-producers working on The Crucible, it could’ve been a case of too many cooks.

Thankfully it wasn’t, and when Motorpsycho heard The Crucible they were satisfied with what’s another ambitious and carefully crafted genre-melting album. While to some extent The Crucible picks up where The Tower left off, the music is much more ambitious, innovative and focused. The music is much wider lyrically speaking band Motorpsycho eschew traditional rock and pop song structures on what’s a much more dense and distinctive album where Motorpsycho combine elements of free jazz, Nordic Wave, progressive rock, psychedelia and rock on three tracks.

This includes Psychotzar a near ten minute track, Lux Aeterna which come in at just under eleven majestic minutes and the album’s twenty-one minute epic, The Crucible. It’s a mind altering and otherworldly musical trip which is unlike the music that most groups are releasing just now. However, this is what critics and record buyers have come to expect of musical pioneers like Motorpsycho who never make the same album twice.

That takes some doing for a band like Motorpsycho, as The Crucible is their twenty-second album. Many bands who have been around as long as Motorpsycho would have resorted to remaking the same album, but not the veteran Norwegian rockers. They’re constantly coming up with new ideas and continually create innovative albums including The Crucible. It features much more ambitious compositions than previous albums, and is another landmark release from Motorpsycho.

The Crucible is an album that packs a punch, and Motorpsycho’s hard rocking sound is reminiscent of Black Sabbath in their prime. That is only part of the story, and Motorpsycho’s progressive rock sound has ben inspired by King Crimson and Yes. However, unlike Yes, Motorpsycho don’t do sprawling epic albums, and don’t outstay their welcome, exiting stage left after three tracks lasting just over forty minutes where blistering rocky riffs and polytonal solos rub shoulders on The Crucible which shows the different sides to one of Norway’s leading bands who celebrate thirty years of making music in 2019. 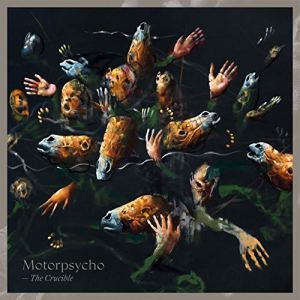