During a long and successful career, Dean Bagar has done just about everything in music,  from managing brands and folding record labels to owning a record shop, DJ-ing and working as a producer. He also collaborated with General Electrick and DJ Deckar in 2001 as Fab Factory, who released three singles and an album. Then in June 2014, using his Tricky D moniker, Dean released his debut album Equanimity. Now five years later, he’s back with a new compilation  Colombian Soul Compiled By Bagar AKA Tricky D, which will be released by BBE Music on the ‘7th’ June 2019. It’s the latest instalment in the Tricky D story.

Dean’s roots are in Croatia, where he was born and brought up. Originally, he was a visual artist, and part of the Croatia’s punk and new wave scene, during the early eighties. By the late-eighties Dean had left Croatia.

Towards the end of the eighties, Dean found himself in London. That was where he first came across reggae sound systems. For Dean, musically, this was an important musical discovery and  later, Dean would spend time in Jamaica. Before that, Dean found himself a refugee.

Back home in Croatia, the political situation was perilous. People were fleeing the Balkan region which was a war zone. As a result, Dean found himself a refugee in Berlin. In his newly adopted hometown, Berlin, he began to become part of the city’s thriving and eclectic music scene.

As a reaction to the problems affecting his home country, Dean threw himself into Berlin’s Daisy Age movement. Its raison d’être was to bring positivity back to the dance floor. Daisy Age stands for “DA Inner Sound Y’all.” It represents a vibe and sound that’s happy, upbeat, playful and experimental. The term Daisy Age was first coined by De La Soul in 1989 and was supported by The Native Tongue movement. It was the Daisy Age movement that saw Dean make his DJ-ing and production debut.

Having become a part of Berlin’s burgeoning music scene, Dean started to get involved in one of Berlin’s underground clubs, Eimer. It was there he made his debut as an underground breakbeat activist. Not long after this, Dean was part of one Germany’s first live drum´n´bass bands, Elektronauten. Dean’s next venture was founding his first record shop, Tricky Tunes. This was a smart move as Berlin’s music scene was thriving. However, before long, Dean has founded another business.

This came after Dean and his friend Mez spent some time in Jamaica. The reason for the journey to Jamaica was to record some sessions with Jamaican singers. After this, Dean decided to found his own label, which he also decided to name Tricky Tunes. His newly founded label went on to release a series of singles and Tricky D’s compilation of collaboration entitled Tricky Tunes Cuts, in February 2011. However, this wasn’t Tricky D’s first collaboration.

This came back in 2001 when General Electrick, DJ Deckart and Tricky D collaborated as Fab Factory. They released a trio of singles and an album. The singles were Keep The Sunshine, City Lights and Magica, while Fab Factory’s only album was City Lights. It was an ambitious album that was well received. Despite that being the only album Fab Factory released, Tricky D’s production career has continued

Following the release of City Lights in  2001, Tricky D has been working hard DJ-ing and producing. Tricky D has been refining his sound. He’s also been a member of Digital Tattoo, an visual-audio project. Then in 2006, Tricky D made his first trip to Columbia.

Equanimity is a genre-melting musical journey which features a whole host of guest artists. Among them are Jupiter, Lianna, Tango Crash, Hernan Lopez Newbery, Katya Tasheva Terrence Borwy, Mr. Baba, Big Mancilla and Nuewella Love. Each of these artists played their part in the sound and success of Equanimity, which was released to critical acclaim in June 2014.

Four years later, Tricky Dubs, an album of Tricky D’s remixes, was released to plaudits and praise by BBE Music. The fifteen remixes showed another side to the original tracks on Tricky Dubs.

Tricky D, whose lived in Colombia for many years, and is an important part of the country’s vibrant music scene, discovered wjya is a much softer and smoother side to Colombian music. This music was almost unknown outside of Columbia, and Tricky D wanted to share this music with the rest of the world. That was how Colombian Soul Compiled By Bagar AKA Tricky D came about. Tricky D remembers his eureka moment: : “I realised that there is no compilation of Colombian downbeat music, so I decided to dig deep and get together collection of dubby, downbeat, minor tuned songs. The result is this collection of twenty spacey, soulful songs recorded by well recognised Colombian artists, many of whom I’ve collaborated with over the past few years.”

That talent is on show from .Jimena Angel’s Ãyelo  which opens Colombian Soul Compiled By Bagar AKA Tricky D and gives way to Cuando Canto Grito by Cerrero and features the talented Lucia Pulido, Next up, is the compiler himself  Bagar aka Tricky D who is joined by Jupier and Lianna on Time; Los Secundos Nunca Paran,. These tracks are joined by Pernet’s Gracias, Lianna’s Cada Paso, Alma’s Kong  and Salsagroove’s irresistible Mujer Divina.

Another familiar face to connoisseurs of Colombian music is Bareto who contributes La Negra Y El Fantasma. Los Transatlanticos who were produced by Tricky D are joined by Pilar Matarola on De Donde Vengo Yo which is one of the highlights of  Colombian Soul Compiled By Bagar AKA Tricky D.

Welcome additions to Colombian Soul Compiled By Bagar AKA Tricky D are Romperayo’s De Tocaima A Acapulco, Ruzto’s ManÌana SeraÌ and Magallanes’ Tres DÃ­as De Oscuridad  which closes the compilation on a high.

Colombian Soul Compiled By Bagar AKA Tricky D is a lovingly curated compilation, and is the perfect introduction to this little known side of the vibrant Columbian music scene. Just like any good compilation, familiar artists are joined by new names on what’s an eclectic compilation, that showcases some of the truly talented artists and bands who have emerged in Columbia’s underground music scene over the last few years. Hopefully, we’ll hear more from these artists, and hopefully, a followup to Colombian Soul Compiled By Bagar AKA Tricky D, which is a compilation that oozes quality. 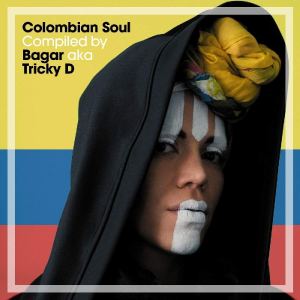