Nowadays, the compilation market is without doubt, one of the most competitive in the music industry. Every week hundreds of compilations are released by labels in America, Europe and Britain. Some are released by major labels, while others are lovingly curated and released by smaller independent labels. However, what many of these compilations concentrate on one type of music.

This can be anything from progressive rock and psychedelia, to funk or fusion, throughout to blues, country, R&B, reggae and soul. Some record companies have taken to focusing on one of America’s great musical cities or states. Among the favourite cites for compilers have been Chicago, Detroit, LA, Memphis, New York and Philly. Often though, some of America’s most musical cities and states were being overlooked, and for too long, this included Louisiana and later, Texas. One man decided to rectify this, Ian Saddler.

He’s a renowned expert in Louisiana and Texas’ rich musical heritage, which made Ian Saddler the perfect person to compile Boppin’ By The Bayou for Ace Records. It was released in 2012, and was so successful that another instalment in the series was commissioned.

These tracks were recorded by some of the region’s best known and most successful producers and record label owners. This includes Eddie Shuler, Floyd Soileau, Huey Meaux, JD Miller and Sam Montel who all had one thing in common, an uncanny ability to recognise talented musicians and creating an environment to nurture them and allow them to fulfil their potential.

Eddie Shuler was tased in Lake Charles, while Crowley was home to  JD Miller when they both decided to found their first labels. Initially, they were recording and releasing Cajun music but both switched to blues and R&B in the early fifties.

Around a decade later, Floyd Soileau, who was based in Ville Platte, and Baton Rouge-based Sam Montel both founded their own companies. Floyd Soileau focused on Cajun music, while Sam Montel  turned his attention to R&B and rock ’n’ roll.

Meanwhile, future producer, Huey Meaux, was managing artists in Port Arthur, where he was based. Initially, he managed Cajun artists but soon was adding rock ’n’ roll singers to his burgeoning roster. At  first he placed artists with Floyd Soileau’s Jin label, but soon realised that owning a record label and publishing company was more profitable than working as an artist manager. Huey Meaux was the final member of this quintet of producers who were responsible for recording the music that defined a generation.

The twenty-eight tracks on Rhythm and Bluesin’ By The Bayou-Bop Cat Stomp includes eleven that have never been released before or are alternate takes. This is similar to previous instalments in the By The Bayou series. Rhythm and Bluesin’ By The Bayou-Bop Cat Stomp opens with Everybody Wants To Know by Lester Robertson which sets the bar high. However, compiler Ian Saddler has unearthed some more unissued hidden gems this time round. This includes Cookie and The Cupcakes’ Crazy Rock plus Rocks On My Pillow. They’re joined by Sonny Martin’s For Your Precious Love and alternate take 2s of Blues Boy Palmer and The Bill Parker Band’s Mary, Mary and Little Miss Peggie and The Bill Parker Band’s Come Over Here. Then there’s  Rockin’ Sidney’s Augustine, Thaddeus Declouet’s  Shake It Up (All Night Long), Big Chenier’s Stand By My Side, I Wants You by Ashton Savoy and Guitar Gable and King Karl’s Goodbye Whiskey. These unreleased and alternate takes are a cut above what most compilers unearth. However, they don’t have Ian Saddler’s knowledge.

Among the highlights of the other tracks are Big Walter’s Never Too Old plus Crazy Dream and  Bop Cat Stomp by King Charles and His Orchestra which features Left-Hand Charlie. They’re joined by Clifton Chenier’s It Happened So Fast, Margo White’s Don’t Mess With My Man and Whoa Mule by Leroy James and His Combo Rhythm and Bluesin’ By The Bayou-Bop Cat Stomp on a stomoung high. 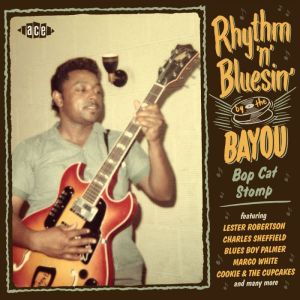