During the early seventies, the German music scene was thriving, and  was one of the most vibrant in Europe. Some of the most influential and innovative music was being recorded and released by German bands. This included the holy trinity of Can, Kraftwerk and Neu!. Along with Amon Düül II, Ashra, Cluster, Popol Vuh and Tangerine Dream, these groups were at the forefront of a new musical movement.

In Germany, this new musical movement was called Kosmische musik. Its roots can be traced to the late-sixties, and in a way, were a reaction against the rigidity and rules of traditional music. No longer were musicians willing to be constrained by the rules of modern music. They wanted to free themselves from the shackles of rules and rigidity, and in the process, create new and groundbreaking music.

To do this, musicians fused a disparate and eclectic selection of musical genres, including everything from avant-garde, electronica, experimental rock, free jazz and progressive rock. All this influenced and inspired Kosmische musik. This included the holy trinity of Can, Kraftwerk and Neu!.

They went on to create music that at the time, was ambitious, groundbreaking and innovative. Musical boundaries were pushed to their limits, and musical norms challenged. The holy trinity are remembered as bands that featured fearless visionaries. This includes Michael Rother, who was a member of three of the biggest bands in German musical history Kraftwerk, Neu! and Harmonia.

After the release of their sophomore album Deluxe, in August 1975, it looked as if Harmonia had just about run its course. and  Michael Rother was ready to embark upon a solo career. That would take up the majority of his time. Michael’s first solo album was “Flammende Herzen which I recorded at Conny’s Studio.” Michael had entrusted his solo career to the man he refers to as “the genius.”

Recording of Flammende Herzen began at Conny’s Studio in June 1976. Michael had penned five tracks, and planned to play most of the instruments himself. The only instrument he couldn’t play were the drums, so Jaki Liebezeit of Can came onboard, and this was the start of a long-lasting collaboration. That was the case with Conny Plank, who co-produced Michael’s debut solo album.

At Conny’s Studio, five instrumentals which were based around Michael’s guitar were recorded. These tracks became Flammende Herzen, which was completed in September 1976. Michael’s debut album scheduled for release in March 1977.

Before the release of Flammende Herzen, critics had their say on Michael Rother’s solo album. Most of the reviews were positive, and it seemed that Michael’s fortunes were about to change.

When Flammende Herzen was released in March 1977, the album wasn’t a commercial success. Despite releasing album after album of innovative and influential music, they failed to sell. It seemed that the music Michael Rother was too innovative and record buyers didn’t understand the music. The only small crumb of comfort for Michael, was that: “Flammende Herzen, which, was released as a single, was later used in the soundtrack to Flaming Hearts.”

Nowadays, Flammende Herzen is regarded as one of Michael’s finest solo albums. It’s as if this was the album he had been longing to make. Sadly, in 1977,  as punk was making its presence felt, Flammende Herzen passed record buyers by. By then, Michael had been back in the studio with Harmonia, and a special guest, Brian Eno. 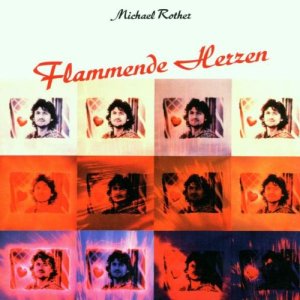 The Return Of Harmonia With Brian Eno-Tracks and Traces.

After the release of Musik von Harmonia, Brian Eno had called Harmonia was: “the world’s most important rock band” at the time. It was no surprise that when Harmonia reunited to record their third album, it was a collaboration with Brian Eno. However, it was also the end of an era.

Little did the three members of Harmonia realise, that Deluxe was the last album they would release for thirty-two years. For what was their swan-song, Harmonia were joined by another legend, Brian Eno.

Michael remembers the sessions well. “Brian Eno was a very intelligent man. He seemed to know what music was on the way up. By then, he was making ambient music and was working as a producer. He was about to produce David Bowie’s Heroes’ album.” However, for the next eleven days, Brian Eno joined the band he had been championing since their debut album.

At the studio in Forst, Hans-Joachim Roedelius, Dieter Moebius, Michael Rother and Brian Eno spent eleven summer days recording what was meant to be their third album. The working title was Harmonia ’76. However, by then, Hans-Joachim Roedelius remembers  “Michael Rother was wanting to concentrate on his solo career. Once the album was completed, it became apparent Harmonia had run its course. It was evolution.”

This wasn’t surprising. Harmonia weren’t selling many records. Michael Rother remembers: “it was a tough time for us. Our music seemed to be ignored.” Neu! also seemed to have run its course. “Neu ‘75 hadn’t sold well. Klaus wasn’t an easy person to work with. So, I decided to return to my solo career after the release of Harmonia ’76.” That never happened.

After the drama and disappointment of the loss of the master tapes for Harmonia ’76, the three members of Harmonia went their separate ways. By September 1977, Michael was ready to record his sophomore album Sterntaler.

It was recorded between September and November 1977 at two studios. This included Conny’s Studio, and Michael’s studio in Forst. By then, Michael was a true multi-instrumentalist, and was playing guitar, bass guitar, piano, synths, electronic percussion Hawaiian slide guitar and synth strings. Augmented by Jaki Liebezeit’s drums, Sterntaler took shape.

Unlike his debut album, the synths were playing an important part in Sterntaler’s sound, and were responsible for the melody. Then on the ambient sounding Blauer Regen, Jaki Liebezeit’s weren’t needed. This was another signal that Michael’s music was changing. Michael and co-producer Conny Plank finished work on Sterntaler in November 1977. Maybe the stylistic shift would result in a change in Michael’s fortunes?

Sadly, it was a familiar story. The reviews of Sterntaler were generally positive, and Michael was regarded as one of the most innovative musicians of his generation. However, when Sterntaler was released, the album didn’t sell well . Michael remembers; “my music seemed to be out of fashion.” However, he continued to make music, music that continued to evolve.

Recording of Michael Rother’s third album Katzenmusik took place between March and July 1979. Just like his previous album, the album was recorded in Forst and Conny’s Studio. Michael used mainly electronic instruments. They were augmented by guitars and Jaki Liebezeit’s drums.

It seemed that if Michael Rother was a painter, he was reducing his pallet. That would be the case for most musicians. However, Michael Rother wasn’t most musicians. Along with his co-producer Conny Plank, they recorded two suite of songs which featured twelve tracks. Essentially, they were variations layered around four different five-note melodies. They then recur in a variety of ways. Although stylistically, the music was similar to his two previous albums, the instruments used had changed. However, this didn’t stop Michael Rother recording another album of groundbreaking music. It was released later in 1979.

On Katzenmusik’s release, some critics hailed the album Michael Rother’s finest hour. He had come of age as a solo artist. This should’ve been a cause for celebration. However, it was, and it wasn’t.

Katzenmusik was the last album Michael recorded with Conny Plank. “It was no reflection on Conny. The man was a genius. However, I wanted to go my own way, and explore other options.” Sadly, Michael Rother and Conny Plank’s swan-song wasn’t a commercial success. It would be another three years before Michael released a new album.

It was 1981 when Michael Rother began work on his fourth album. The recording took place at Michael’s own Flammende Herzen Studio in Forst. It was just Michael and drummer Jaki Liebezeit. Unlike his first three albums, Conny Plank was absent. “We remained friends, and I owe Conny a lot, but it was the time to move on.”

This couldn’t have been easy. The pair had worked on nearly every project Michael had been involved with. Fernwärme was a first. It was just Michael, Jaki and the latest electronic instruments. They were used extensively on Fernwärme. This included drum machines. For Jaki Liebezeit the writing was on wall. Fernwärme was his swan-song with Michael Rother.

Michael explains: “Fernwärme was the last project Jaki worked on. Again, it was nothing personal. It was similar to the situation with Conny Plank. I wanted to move in a different direction, and already had began to use drum machines. Jaki was a fantastic drummer. The man is a machine, and will be drumming the rest of his life. However, Fernwärme was the last time we worked together.”

As Michael Rother prepared for the release of Fernwärme in 1982, it must have been with a degree of trepidation. It was the first album he had produced himself. However, he needn’t have worried, as Fernwärme was well received upon its release. Michael’s first album in three years, and the first he had produced himself was hailed a success. Sadly, the wider record buying public still hadn’t discovered Michael Rother’s music. “It was a really frustrating time for me.”

Michael Rother’s first four solo albums  Flammende Herzen, Sterntaler,Katzenmusik and Fernwärme, have just been released by Gronland Records and this is a welcome reminder of a musical pioneer at the peak of his creative powers.  Michael Rother has been part of three of the biggest bands in the history of Kosmische musik; Kraftwerk, Neu! and Harmonia. He then embarked upon a solo career and eventually, would release nine solo albums and more recently, two soundtrack albums. However, for many connoisseurs of Kosmische musik, Flammende Herzen, Sterntaler, Katzenmusik and Fernwärme feature the best music of Michael Rother’s solo career. These are albums he never bettered and are feature a groundbreaking musicians who as he wrote his name into German musical history fist with Kraftwerk,  Neu! and Harmonia and then as a solo artist with albums of the quality of  Flammende Herzen, Sterntaler, Katzenmusik and Fernwärme which even today, continues to influence and inspire a new generations of musicians.