SEUN KUTI-HIS FATHER’S SON MAKING HIS OWN WAY IN MUSIC.

Seun Kuti-His Father’s Son Making His Own Way In Music.

Nowadays, one of the most overused word in the English language is legend, which is bandied about all too freely, with faux punks, third-rate Britpop bands and Beatles impersonators being labelled legends by fawning music journalists who hang on their every word. These bands aren’t worthy of being called legends, and in truth, very few bands or artists can truly be referred to as legends. However, one artist who deserves to be called a legend is the late, great Afrobeat pioneer and human rights and political activist Fela Kuti, who passed away in Lagos, Nigeria, on the ‘2nd’ of August 1997, aged just forty-eight. That day, African music lost one of its greats.

By his death in 1977, Fela Kuti was a truly prolific artist, who had recorded over forty albums,and they were part of the rich musical legacy that he left behind. This included many albums of groundbreaking and timeless music, that nowadays, are regarded as Afrobeat classics. Some of these albums were recorded with his band Egypt 80, and after Fela Kuti’s death, many people wondered what would happen to this talented band?

They never expected Fela Kuti’s youngest son, fourteen year old Seun Kuti to takeover from his father, and lead Egypt 80. For some, this was a totally unexpected development, while others had watched Seun Kuti learn from his father over the past five years.

Seun Kuti was born Oluseun Anikulapo Kuti in Lagos, Nigeria, on the ’11th’ of January 1983, and by the age of nine, told his father Fela Kuti, that he wanted to sing with his band. For Fela Kuti, this was the latest member of his family who was about to follow in his footsteps, and embark upon a musical career in 1992.

By then, Femi Kuti who was the eldest child, was thirty, and already was a successful musician. Seun Kuti knew he had a long way to go before he would enjoy the same success as his brother.  That was all in the future, and Seun Kuti was happy to serve his musical apprenticeship singing with Fela Kuti and Egypt 80.

Over the next few years, Seun Kuti went to school during the day, and in the evenings and weekends played live with Fela Kuti and Egypt 80. Seun Kuti soon became a valuable member of Egypt 80, but music wasn’t the only thing that he was good at. He was also a talented schoolboy footballer who many thought had the potential and talent to eventually become a professional player. This meant that Seun Kuti had to choose between football and music. However, there was only one winner, and Seun Kuti decided to continue his musical apprentice and learn from his father who by 1997 was regarded as one of the greatest ever African musicians.

Sadly, Fela Kuti passed away on the ‘2nd’ of August 1997, when Seun Kuti was just fourteen. His death came as a huge shock to his family, and left a massive void including in his band Egypt 80. The big question was it too big a void to fill?

Many thought that nobody could replace Fela Kuti, but not long after his death, his youngest son Seun Kuti decided to become the lead singer of Egypt 80. The fourteen year old was now leading a band full of seasoned musicians who were among the best in Nigeria.

Initially, Seun Kuti and Egypt 80 started playing covers of his father’s music, including songs from his many albums. This was welcomed by the audience, as Fela Kuti had never played songs from his albums live, and when Seun Kuti and Egypt 80 played like Shuffering and Shmiling, Colonial Mentality and Army Arrangement live this was a first. Fela Kuti’s old fans and Seun Kuti’s new fans welcomed the opportunity to hear classic songs and old favourites.  Gradually, though, Seun Kuti and Egypt 80 started to introduce new songs into their sets, and over the next two years, the young bandleader honed his songs with a view to recording his debut album.

In 2007, Seun Kuti and Africa released the 12” single Think Africa which marked the debut of the twenty-four year old bandleader. A year later, Seun Kuti and Africa returned with their debut album Many Things in 2008, which was produced by Martin Meissonnier, who had previously produced two albums for Fela Kuti. Many Things was released to plaudits and praise and marked the start of a new chapter in the story of the Kuti musical dynasty.

Nine months after the release of From Africa With Fury, Seun Kuti became involved with the Occupy Nigeria protest in his native Nigeria in January 2012. Just like his father, Seun Kuti was already heavily involved and interested in politics and human rights, and protested against the fuel subsidy renewal protest by the Nigerian President Goodluck Jonathan. Seun Kuti was following in his father’s footsteps not just musically, but with his political activism.

Following A Long Way To The Beginning, Seun Kuti and Africa spent much of the next couple of years touring, but found time to record the Struggle Sounds EP which was released in 2016.

Apart from the Struggle EP, nothing more was heard from Seun Kuti and Africa until 2018 when they returned with their fourth album Egypt Times. It was well worth the wait and is undoubtably the most powerful album that Seun Kuti and Egypt 80 have released. The eight tracks were penned by Seun Kuti and find the thirty-five year turn his attention to the problems facing his native Nigeria. Just like his father Fela Kuti, Seun Kuti is determined to provide a voice for the millions of Nigerians who have none. His way of doing this is through the music on Black Times.

Although it’s nearly four years since Seun Kuti and Egypt 80’s previous album, Black Times was well worth the wait. It’s a powerful and politically charged album that features Seun Kuti and Egypt 80 are in full flight combining Afrobeat, funk, soul and sometimes blues, jazz and rock on eight new songs. These are songs that Seun Kuti’s father Fela Kuti would be proud of, as his son speaks to and for his fellow countryman in his native Nigeria

Thirty-six year old Seun Kuti whose spent the last twenty-two years playing live and recording with Egypt 80, and is following in his father’s footsteps by recording and releasing powerful, politically charged  cerebral and thought-provoking that provides a voice for those who are disadvantaged and disenfranchised.

Seun Kuti-His Father’s Son Making His Own Way In Music. 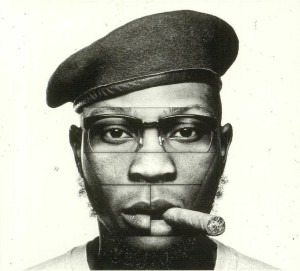 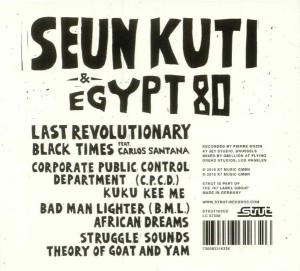