Nowadays, every third rate, regional bar band has delusions of becoming the next Led Zeppelin, Deep Purple or Black Sabbath, and spend their days dreaming of fame and fortune. Alas, these poor deluded fools shouldn’t give up their day job and should stick to pumping gas and parking cars because they usually lack one important thing…talent.

Meanwhile,  many talented artists have released albums that through no fault of their own, never found the wider audience that they deserved. This includes Shuggie Otis, Nick Drake, Linda Perhacs and even the likes of John Martyn,  Tom Waits, Andy Bey and Jon Lucien. To these names add Nigerian singer, songwriter and arranger Ben Jagga, who released  the West African boogie classic Hold On Pretty Woman.

Original copies of Hold On Pretty Woman are much prized amongst afficianados of boogie nowadays,  but comes at a price. Sadly, it’s a price that nowadays, is beyond most record collectors. That was until now, and BBE Africa’s lovingly curated reissue of Ben Jagga’s Hold On Pretty Woman which is part of their Tabansi Gold reissue project. It’s the first ever reissue of this much-loved West African boogie classic.

The story begins when Nigerian singer, songwriter and arranger Ben Jagga wrote the eight tracks that would eventually become his debut album Hold On Pretty Woman. It was the only album that he would release as a solo artist, although he was a member of  Cloud 7 and The Ice Cream. However, Ben Jagga’s best known album is Hold On Pretty Woman.

It was recorded and produced by Ephraim Nzeka of Brother To Brother at Tabansi Recording Studios. Joining Ben Jagga was a band who are responsible for tight, understated arrangements. It consisted of just drums, bass, guitar and keyboards. Adding backing vocalists was a who’s who of artists signed to the of Tabansi label. Added backing vocals were Bummy Olajubu, Judith Ezekoka, Zak Roberts, Eric Kol and Nkem Njoku. Once the album was recorded, Martin Ikebuaku,  who worked for all of the major Nigerian record labels, and is regarded as one of the architects of the  West African boogie sound. This included several classics, including Hold On Pretty Woman which was released by Tabansi and marks the debut of Ben Jagga.

Sadly, when Ben Jagga’s debut album Hold On Pretty Woman was released,  it wasn’t a huge commercial success. It was a familiar story, in that it wasn’t until much later when DJs and record collectors picked up copies of Hold On Pretty Woman did they realise that this hidden gem was in fact, a West African boogie classic.

Opening with the title-track Hold On Pretty Woman which is a joyous, funky slice of boogie and sets the bar high.  You’re The Light Of My Life is a heartfelt soulful ballad, which gives way to the heartachingly beautiful  Let’s Vow We’ll Never Part where gospel and soul melt into one. You’re My Reason For Living is a gorgeous  paean, while Aliyenju is a fusion of boogie and roots reggae of Aliyenju. Just Forgive and Forget has an understated arrangement that allows the vocal to take centre-stage, while It’s You Forever is another irresistible slice of West African boogie. Closing Hold On Pretty Woman is an adaptation of the nursery rhyme Jack and Jill,  which is given a musical makeover and heads in the direction of what’s best described as Brit Pop. It brings to a close this West African boogie classic.

Ben Jagga never released a followup to Hold On Pretty Womanwich is much prized amongst collectors of boogie. That is no surprise as it’s an album that oozes quality.  Hold On Pretty Woman features eight tracks that are funky, soulful and dancefloor friendly and there’s no doubt that this oft-overlooked hidden gem from Ben Jagga is a West African boogie classic. 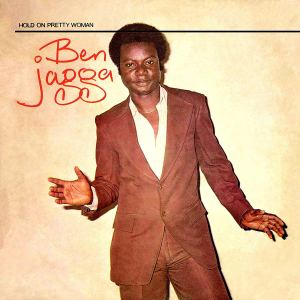