IN 1984 THE BLUE NILE RELEASED A WALK ACROSS THE ROOFTOPS.

In 1984 The Blue Nile Released A Walk Across The Rooftops.

Some albums are like old friends, and that is the case with The Blue Nile’s debut album A Walk Across The Rooftops. It’s an album I’ve treasured and loved for over three decades, and has I been a faithful companion in an ever-changing musical world. A Walk Across The Rooftops is also a timeless classic and one of the best Scottish albums of all time. It was recorded by a remarkable group, whose likes we’ll never see again in Scotland.

Enigmatic, reluctant and contrarian are words that best of describe The Blue Nile’s 1984 debut album A Walk Across the Rooftops. The Blue Nile are the complete opposite of most bands. Describing the Blue Nile as publicity shy, is an understatement. Indeed, since Paul Buchanan, Robert Bell and Paul Joseph Moore formed the Blue Nile, they’ve been one of the most low-profile bands in musical history. It seems that when they formed thirty-five years ago, The Blue Nile ticked the “no publicity” box. This has proved a double-edged sword, and resulted in The Blue Nile becoming one of the most enigmatic groups ever.

Having released their debut album A Walk Across the Rooftops in 1984, only three further albums were released during the next twenty  years. Five years after A Walk Across the Rooftops came 1989s Hats. This marked the end of the original Blue Nile sound, where influences so diverse as Kraftwerk, Brian Eno and Frank Sinatra united. The next time Blue Nile released an album, they turned to America for inspiration.

Seven long years passed, where Blue Nile fans wondered what had become of Glasgow’s most enigmatic trio. Then the unthinkable happened. The Blue Nile signed a million Dollar deal with Warner Bros. and along came Peace At Last, released in 1996. Gone was the sound of A Walk Across the Rooftops and Hats, with the American-influenced Peace At Last showing a different side to the Blue Nile and their music. Paul, Robert and P.J. were back, but it was a different sound. One constant was Paul’s worldweary vocal. He was still the tortured soul, who wore his heart on his sleeve. Opinions were divided among fans and critics. Little did we know that Peace At Last was their penultimate album.

High released in 2004, proved to be the Blue Nile’s swan-song. It was very different from their first two albums, Although soulful, High lacked the European influence of A Walk Across the Rooftops and Hats. Some critics unkindly called High soul for the wine bar generation. Obviously, they didn’t quite get High, or more likely, didn’t want to. Maybe they didn’t want to understand its subtleties and nuances. What they neither understood nor realized was that the Blue Nile were never a band to stand still. Instead, they’d always tried to innovate and ensure their music evolved and was reborn. Sadly, there would be no rebirth for the Blue Nile’s music. After just four albums, the Blue Nile were no more. Even when they spilt-up, the Blue Nile never told anyone. Instead, like the lover that waits for the letter that never arrives, Blue Nile fans waited for an album that was never released.

Just like that lover, all we’re left is our memories. This includes the four albums The Blue Nile released between 1984 and 2004. The first of these was A Walk Across The Rooftops, which was released in 1984. That was thirty years ago. Sadly, there’s no fanfare for what was a true classic, and the album that launched the career of the enigmatic Blue Nile. They always did things their way.

The Blue Nile were formed in 1981, when two friends Paul Buchanan and Robert Bell, met Paul Joseph Moore, all of whom met at Glasgow University. Before forming the Blue Nile, Buchanan and Bell were previously members of a band called Night By Night. Try as they may, a recording contract eluded them. Night By Night’s music  wasn’t deemed commercial enough. So Paul, Robert and P.J. decided to form a new band, Blue Nile.

Blue Nile kept writing and recording material after the merger of RSO with Polygram. Some of that material would later be found on  A Walk Across the Rooftops. When recording engineer Calum Malcolm heard The Blue Nile’s music, he alerted Linn Electronics. At last, their luck had changed.

Linn gave The Blue Nile money to record a song that they could use to demonstrate the quality of Linn’s top-class hi-fi products. When Linn heard the track they were so pleased, they decided to set up their own record label, which would release their debut album A Walk Across the Rooftops 1984.

Although this allowed the band to finally release their debut album A Walk Across the Rooftops, Paul Buchanan later wondered whether Linn was the right label for the Blue Nile to sign to. He felt that Linn didn’t operate like a record label. Mind you, he conceded that, during this period, The Blue Nile weren’t like a band.

A Walk Across the Rooftops opens with the title-track, A Walk Across the Rooftops. Like much of the album, the tempo is slow, the sound moody and hauntingly beautiful. It’s a song about love, and being in love. Washes of Brian Eno influenced synths meander in, joined by percussion. They add drama and tension, while the slow tempo adds to the impact of the lyrics. Beautiful lush strings, the slow steady beat of a drum machine and Paul Buchanan’s worldweary vocal, become one. Soon, Paul’s vocal and the arrangement grow in power, emotion and drama. Although it’s a love song, it’s a love song with a difference. Paul sings of his love for Glasgow, name-checking the things he loves about the city. For five minutes, drama and emotion unite to create what’s quite simply a beautiful track, featuring a vocal tour de force from Glasgow’s Frank Sinatra and troubled troubadour Paul Buchanan.

Tinseltown In the Rain is the most upbeat song on A Walk Across the Rooftops. The  funkiest of bass line, stabs of keyboards and guitars unite. When Paul’s vocal enters, he delivers some really beautiful, poetic and Glasgow-centric lyrics. They reminds me of Glasgow. Even the title puts me in mind of a rainy, winter’s night in Glasgow. People going about their business, walking hand in hand on a cold, wet winter’s night. Lovers walking hand in hand, neon lights casting their shadows over them, the buildings and the city. Strings that sweep and swirl furiously, take this track to another level. Meanwhile the slap bass drives the track along, with flourishes of keyboards for company. Together, they create a track that’s a funky, orchestral, symphonic Magnus Opus, and one that’s wonderfully Glasgow-centric.

Rags To Riches like all the tracks on A Walk Across the Rooftops is written and produced by Paul Buchanan and Robert Bell. Sounds and textures shine through. So do the atmospheric sounds that open the track. Along with the mid-tempo beat, meandering waves of synths give the arrangement a somewhat industrial, Kraftwerk sound. What makes the song are the lyrics, plus Paul’s heartfelt, worldweary vocal. He’s like a modern-day minstrel or troubadour, delivering a vocal bathed in sadness, passion and pathos. As the industrial sound continues, building and growing, it becomes dramatic and even, challenging. Still, beauty and emotion shines through. Paul referencing and influenced by troubadours and crooners, lays bare his soul against a post-modernist backdrop, that’s drama personified.

Stay sees the tempo and the emotion and heartache grow. Synths, drums that crack like whips and percussion set the backdrop for Paul’s vocal. He pleads, his vocal tinged with emotion, sorrow and sadness, as sings about his crumbling relationship. Robert Bell’s thunderous, dramatic, slapped bass crackles. It’s as if it’s reflecting the electricity in Paul’s vocal. Welling up with emotion, he pleads, asks, begs, his partner to stay. He’ll change: “learn to understand you.” It’s hugely moving, emotional and soulful. You can’t help but feel and sympathize for Paul and his plight, on what’s quite simply, a Blue Nile classic. Not only is one of the highlights of A Walk Across the Rooftops, but their career.

Just a wistful, melancholy piano opens Easter Parade and accompanies Paul’s weary vocal. The tempo is slow, the sound haunting and beautiful. It’s apparently about a young man being stuck on a street whilst an Easter parade takes place around him. This evokes old and painful memories, when he attended church and learned about religion and the death of Christ. This is a sad, spiritual and incredibly moving and hauntingly beautiful song.

Heatwave sees the Blue Nile tease and toy with you. After meandering slowly into life, stabs of synths, percussion and then thunderous drums signal the arrival of Paul’s vocal. His vocal is filled with sadness, despair and even bitterness. Soon the arrangement loses its moody, pensive sound. Although other bands kick loose, the Blue Nile don’t. That’s not quite their thing. They nearly do though, just don’t tell anyone. Guitars and bass unite. Together with washes of synths and crunchy drums, they provide a sound where hope shines through. They also provide a backdrop for a peerless vocal from Paul. Although his vocal might be worldweary and tired, hope shines through. Textures and layers of music unfold, washing over you, drawing you in. The band play under and around Paul’s vocal, with Paul, Robert and P.J. becoming one. They unite, to create a track that’s a timeless, emotive roller-coaster that you don’t want to ever climb of.

Closing A Walk Across the Rooftops is Automobile Noise. It sees a return to the industrial sound that is heard on Rags To Riches. Again, the tempo is slow, with Brian Eno and Kraftwerk influencing the track. There’s a combination of avante-garde and more traditional sounds as the track reveals its secrets. This works, and works well. Thunderous crashes of cymbals, crispy drums and melancholy keyboards create a compelling backdrop for Paul’s vocal. He delivers some insightful lyrics about one person’s struggle to cope with life in the city. They find urban life tiring, almost soul destroying. Soon, they tire of the daily grind, they’re fed up just keeping their head above water. Gradually, they long to walk away from chasing the wealth the city promises. Sadly and tragically, it’s always just out of their reach. Of all the songs the Blue Nile wrote, the lyrics to Automobile Noise are among their most insightful and honest. Twenty-eight years after A Walk Across the Rooftops, these lyrics are just as relevant, poignant and insightful.

So what makes A Walk Across the Rooftops such a special album? After all, it contains just seven songs and lasts just over thirty-eight minutes. Within these thirty-eight minutes, the lush, atmospheric sound draws the listener in, holding their attention. Before long, the listener has fallen in love. They fall in love with music that’s hauntingly beautiful, emotive, dramatic and pensive. Much of this is thanks to seven peerless vocal performances courtesy of Glasgow’s very own Frank Sinatra, Paul Buchanan. He plays the role of the troubled troubadour, to a tee. His worldweary, emotive, heartfelt and impassioned vocal sounds as if it’s lived the lyrics he’s singing about. Lived them not just once, but several times over. Paul’s vocal adds soulfulness to an album that references Brian Eno, Kraftwerk, Tim Buckley, classic soul and seventies funk. The result is a compelling, innovative album.

In 1984 The Blue Nile Released A Walk Across The Rooftops. 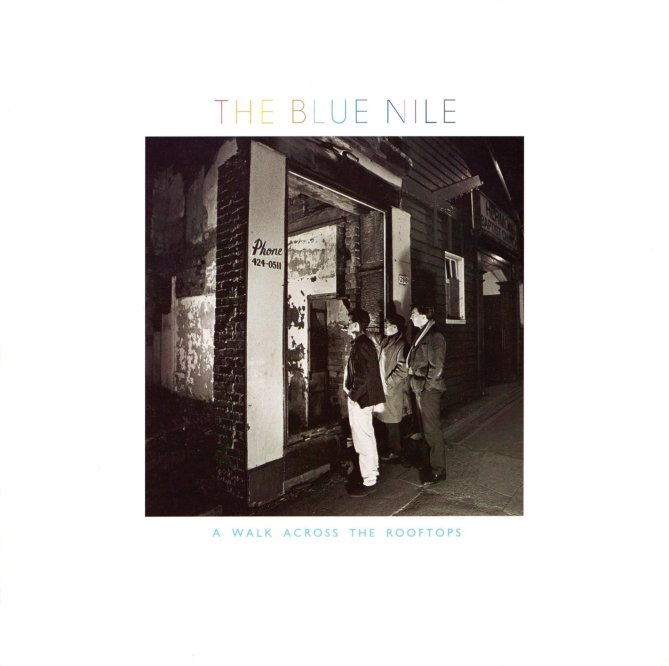