MOVE ON UP: THE SONGS OF CURTIS MAYFIELD.

Move On Up: The Songs Of Curtis Mayfield.

After the demise of The Impressions in 1970 following the release of Check Out Your Mind, Curtis Mayfield embarked upon a solo career. It spanned three decades and commercial success and critical acclaim were constant companions for the Chicago-born soul man.

Between his 1970 debut Curtis, and 1996s  New World Order the former Impression  released twenty-seven albums. This included seventeen studio albums,  six soundtracks and four live albums. Five of these albums topped the US R&B charts while Curtis, Super Fly and Back To The World were certified gold in America. While these three albums offer a tantalising taste of the considerable talents of Curtis Mayfield the soul singer, he was also a producer, but first and foremost regarded himself as a songwriter.

Many of his songs have been covered by other artists over the past five decades. This includes some of the biggest names in R&B, soul and funk have covered Curtis Mayfield songs from the Queen of Soul Aretha Franklin to Maxayn and Melba Moore to Baby Huey and The Babysitters to Barbara Mason as well as Devon Russell, Gladys Knight and The Pips, Sue Barker and The Staple Singers. They’re just a few of the artists on Move On Up: The Songs Of Curtis Mayfield, which will be released by the Australian label  Playback on ‘8th’ November 2019. It features an all-star who cover twenty  of Curtis Mayfield’s love songs and his inimitable and timeless socially conscious soul.

Opening Move On Up: The Songs Of Curtis Mayfield  is Maxayn’s cover of Check Out Your Mind. It was the title-track from The Impressions’ final album released in 1970. Three years later in 1973,  Maxayn released her cover version on the Capricorn label. She delivers an impassioned and soulful vocal breathing meaning into lyrics full of searing social comment. This she does against a carefully crafted and funky backdrop that features a truly talented all-star band. It’s a wonderful way to start any compilation.

Gladys Knight and The Pips covered On and On in 1974. It was arranged by Rich Tulo and produced by Curtis Mayfield. Strings are added to the funky arrangement as The Pips compliment Gladys’  vocal which is impassioned, hopeful and full of optimism. It’s a reminder of one of the greatest female soul singers of her generation at the peak of her powers.

By the time The Staple Singers released  Let’s Do It Again as a single in 1975, they were signed to Curtom Records and already had enjoyed  two number one singles in the US R&B charts.  Let’s Do It Again made it three and the alum topped the US R&B charts. This was the perfect way to start the post-Stax era for Mavis, Pervis, Pops and Yvonne. Together they’re responsible for vocal masterclass which is framed by Curtis Mayfield’s arrangement.

Barbara Mason who is best known for songs like Yes, I’m Ready and Bed and Board,  recorded Give Me Your Love for the Super Fly soundtrack. Her vocal veers between playful to seductive and sensuous  it’s one of the highlights of a classic Blaxploitation soundtrack which was released in 1972 and set the bar high.

Melba Moore recorded Make Me Believe In You  which was arranged and produced by Van McCoy, and released in 1976. Soulful and dancefloor friendly with a needy, hopeful vocal it was for too long an oft-overlooked hidden gem. Eventually it was released as a single in 2017 and makes a welcome return here.

Against a slow backdrop of lush, sweeping, cascading strings The Notations deliver a heartfelt, hurt-filled harmonies on I’ve Been Trying. This struggle ballad was released in 1972 and features a beautifully orchestrated arrangement that is the perfect backdrop to the harmonies as The Notations tug on the heartstrings.

When Aretha Franklin worked with Curtis Mayfield on the soundtrack to Sparkle in 1976, she was no longer enjoying the commercial success she had during the late-sixties and early seventies. This was a chance to rejuvenate her career, and one of the tracks she recorded was Look Into Your Heart. It’s almost tailor-made for the Queen of Soul  who implores the listener to “ Look Into Your Heart.” It was no surprise when the song reached ten in the US R&B charts and eighty-two in the US Billboard 100.

Sue Barker is, without doubt,  one of Australian music’s best kept secrets. Sadly, this hugely talented singer only released her one album. This was her her self-titled album which was a mixture of soul and jazz and included a stunning cover of Love To The People. It’s just one of many reasons to seek out this hidden gem on an album.

Joanna Teters and Sharon Musgrave joined forces to covered The Makings Of You in 1991. It features a slow, spacious and jazz-tinged arrangement, while Sharon lays bare her soul  with a beautiful, heartfelt vocal.

British born singer Geoffrey Williams covered Super Fly on his 2008 album Move Into Soul. It’s never easy covering such an iconic track but this tender, soulful take shows another side to the song.

Move On Up: The Songs Of Curtis Mayfield closes with En Vogue’s rendition of Giving Him Something He Can Feel from 1992. It was one of the most successful covers of a Curtis Mayfield soul. Sharp but smooth, soulful  and sensual it’s the perfect way to end this homage to one of the legends of soul musici and a truly talented songwriter.

It can’t have been easy choosing just twenty tracks written by Curtis Mayfield for Move On Up: The Songs Of Curtis Mayfield. There’s so many cover versions to choose from that this could easily have been a double album. However, twenty songs from familiar faces and new names were chosen. Legends of soul, funk and R&B rub shoulders with the likes of Sue Barker who is a welcome addition, and will be a new name to many people. This is the beauty of compilations discovering new artists and new versions of familiar songs. That is on That is the case  Move On Up: The Songs Of Curtis Mayfield which will be released by Playback on ‘8th’ November 2019.

Move On Up: The Songs Of Curtis Mayfield finds old friends and new names feature on this lovingly curated compilation of love songs and timeless socially conscious soul from the pen of one the greatest singer and songwriters of his generation.

Move On Up: The Songs Of Curtis Mayfield. 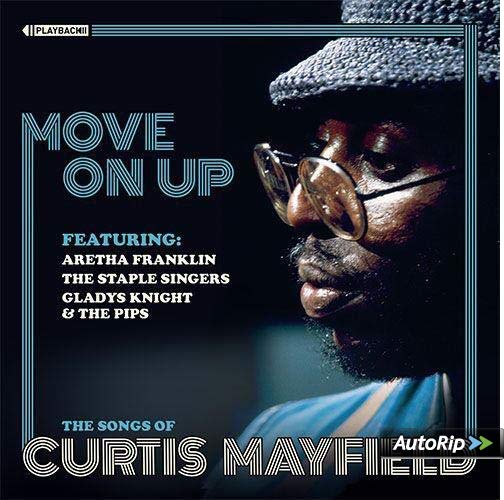