In the late-sixties, self-taught guitarist and jazz aficionado Christian Oestreicher, who was later described as: “a savage in the era of twist and free jazz,” met artist and painter Richard Reimann who was famous for his optical art, at the renowned Aurora art gallery in Geneva, Switzerland. This was the start of a friendship that saw the pair become familiar faces in Geneva’s underground scene which was populated by artists, musicians, painters, poets and writers. Christian Oestreicher and Richard Reimann felt at home within the burgeoning underground scene and were both inspired by the outpouring of creativity that was around them.

Over the next couple of years, the two friends continued their respective careers, until Christian Oestreicher founded a new band Mouvements, having recorded the music the band’s eponymous debut album during 1972, enlisted his friend Richard Reimann to create the artwork.

In 1973, Mouvements was released as a hand-numbered, deluxe box set which featured series of Richard Reimann’s lithographies and inserts. However, only 150 box sets were available and Mouvements’ debut album soon sold out. Since then, it’s been a prized possessions amongst record collectors who cherish their copy of this groundbreaking,  ambitious and genre-melting album. album that was recorded by Christian Oestreicher and his musical friends during 1972.

By 1972, Christian Oestreicher was a twenty-two year old aspiring musician who still lived in Geneva, where he was born in 1950. He had been introduced to music at an early age by his father, who loved jazz music and used to play everything from Charlie Parker, Duke Ellington, Eric Dolphy, Ornette Coleman and Thelonious Monk. Meanwhile, Christian Oestreicher’s cousin who was eight years his senior, introduced him to R&B, and especially the music of Chuck Berry and Ray Charles. This was all part of his musical education, and part of a voyage of discovery for Christian Oestreicher.

Having discovered and embraced an eclectic selection of disparate music, including jazz, R&B and French twist, it was almost inevitable that Christian Oestreicher would want to make the move from listener to musician. When he did, it was as the drummer in bands playing several bands who played New Orleans jazz and rock ’n’ roll between 1962 and 1964. However, in 1964 Christian Oestreicher’s father gave him a Gibson ES-330 TD guitar and he began to reinvent himself as a guitarist.

Unlike many young guitarists, Christian Oestreicher eschewed lessons, and initially, taught himself to play his newly acquired guitar. By then, he was listening to free jazz and would often play along to the records in his collection. Eventually, Christian Oestreicher realised that he could only go so far without lessons, and for two years was taught by French guitarist Bob Aubert.

By the mid-sixties, Christian Oestreicher’s musical education was at an end, and by then, his interest in free jazz had blossomed and he also became interested in the burgeoning American civil rights movement. This marked the start of a new chapter for the teenage guitarist.

When he was twenty, he crashed his moped into a pole, which resulted in Christian Oestreicher fracturing his skull and having to spend six months in hospital. For a while, he was in a coma and suffered epileptic seizures, but gradually, his health started to improve.

So much so, that he was able to read Ernest Ansermet’s 1961 book Les fondements de la musique dans la conscience human, which made a big impression on Christian Oestreicher. He was fascinated by a book that explained the theory of music by math and physics. Christian Oestreicher was so inspired by the book that he spent six years studying the subject, and became especially interested in Pierre Schaeffer’s work. This was all in the future.

Before that, Christian Oestreicher met painter Richard Reimann who was famous for his optical art, at the Aurora art gallery in Geneva, Switzerland in the late-sixties. Soon, the pair became friends and familiar faces in Geneva’s underground scene which was populated by artists, musicians, painters, poets and writers. By then, Christian Oestreicher was starting to forge a musical career, and began work on his first musical project Mouvements.

Initially, Mouvements was a double quartet that featured two drummers and bassists which also featured violinist Blaise Catala who later featured on the Mouvements’ album. This genre-melting album was recorded in 1972, at a mansion in Geneva, where Christian Oestreicher led a group of pioneering and maverick musicians.

When recording began at the Swiss mansion began in 1972, guitarist Christian Oestreicher setup three reel-to-reel tape recorders which would capture the music he made with drummer Jerry Chardonnens, pianist Jean-François Boillat and violinist Blaise Catala. The four musicians stood in a circle as they recorded the eight tracks that eventually become Mouvements. It finds the four members of Mouvements fusing and flitting between disparate musical genres that made for unlikely musical bedfellows.

This included free-jazz which was still one of Christian Oestreicher’s first musical loves, and rubbed shoulders with everything from avant-garde, classical, folk, funk, improv, Krautrock, Musique concrète and psychedelic rock. They were combined with Gallic influences and tape effects during the eight tracks that became Mouvements, which was an ambitious, exciting and innovative album.

That was apparent from the opening bars of the atmospheric and cinematic Largo Pour Piano et Océan, where a piano accompanies the sound of waves crashing on an empty beach. Initially the piano is played slowly and gingerly, but later block chords with power and frustration which adds an element of drama to this cinematic track. Goutte de Sang En Feu is a captivating fusion of avant-garde, Gallic folk, free jazz and tape experiments where Mouvements play with freedom and fluidity during a track that is innovative and is full of surprises. Despite being called, Hard-Rock Ouverture, elements of avant-garde, free jazz and funk are combined during this seven minute experimental rock epic. Ailleurs is a showcase for Christian Oestreicher’s guitar, which is played with speed and fluidity, as he unleashes washes of music that is rocky, lysergic and bluesy. Alas, this musical masterclass lasts less than two minutes.

7 Contre 4 has an understated ruminative sound, as Christian Oestreicher’s effects-laden guitar plays a leading role. Later, as the tempo increases and his playing becomes choppy and funky. It’s all change on Le Voyage Sperper where tape experiments and Musique concrète are part of the stop-start track, which also includes improv, jazz and rock as keyboardist Jean-François Boillat play a starring role. There’s a hesitant start to Nebel/Leben with drum rolls and washes of wailing feedback becoming part of this genre-melting soundscape. It features elements of psych-rock, free jazz, avant-garde, blues and tape experiments which play their part in an ambitious cinematic track. Closing Mouvements is Mémoire Pulvérisée where a Gallic violin is played with urgency, before tape experiments interject. After that, the arrangement heads in the direction of classical music albeit with a hint of avant-garde, ensuring this groundbreaking album ends on a high.

Once Christian Oestreicher had recorded Mouvements in 1972, he enlisted his friend Richard Reimann to create the artworks to the album. In 1973, Mouvements was released as a hand-numbered, deluxe box set which featured series of Richard Reimann’s lithographies and inserts. However, only 150 box sets were available and Mouvements’ debut album soon sold out. Since then, it’s been a prized possessions amongst record collectors who cherish their copy of this ambitious, groundbreaking and genre-melting album that was recorded by Christian Oestreicher and his musical friends during 1972.

They combined everything from avant-garde, blues, classical, folk, free jazz, funk, improv, Krautrock, Musique concrète, psychedelic rock and tape experiments during Mouvements. What’s incredible about Mouvements, is that the group was no longer a double quartet, and had been scaled back to just drums, piano, violin and guitar which were augmented by the tapes which added another dimension to the music on Mouvements. Sometimes, the tapes add the final piece of the jigsaw like on Largo Pour Piano et Océan, and on Goutte De Sang En Feu they spring a surprise that ensures the listener is always on guard, awaiting the next in a series of surprises and unlikely interjections during their eponymous debut album Mouvements.

Sadly, Mouvements was the band’s only album, and they never returned with a followup. Maybe that was just as well, as they had set the bar high with Mouvements, which is a captivating cult classic that features groundbreaking and genre-melting music that  is cerebral, imaginative, thought-provoking and sometimes, is full of surprises as Mouvements showcase their considerable talent during eight tracks lasting forty-two minutes. 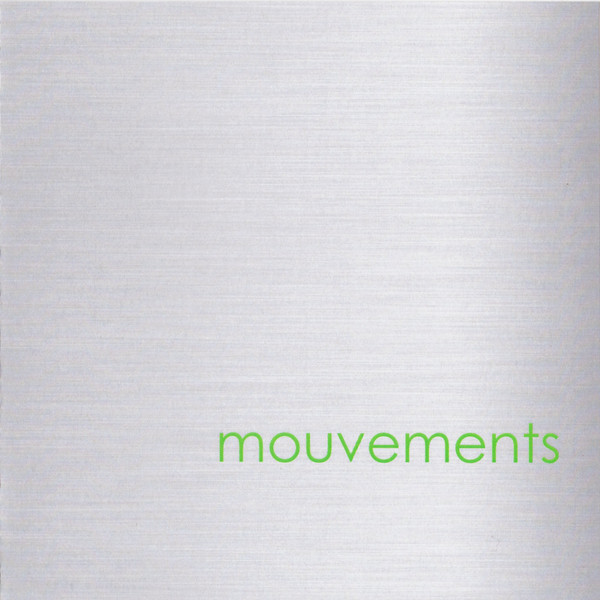