Tangerine Dream are, without doubt, the original musical chameleons. Since forming in 1967, Tangerine Dream’s music has been constantly evolving. As a result, they can never be accused of standing still. Far from it.

When Edgar Froese founded Tangerine Dream in 1967, he was briefly joined by drummer Klaus Schulze. However, before long, Klaus left Tangerine Dream. This was a brief taste of the future.

Little did Edgar realise, that over the next forty-eight years, that another twenty-four musicians would play a part in the Tangerine Dream story. Some, however, like Klaus Schulze, would only play a walk-on part in Tangerine Dream’s story. Others, including Christopher Franke and Peter Baumann played a starring role in the rise and rise of Tangerine Dream.

Recording of Electronic Meditation took place in in a disused factory in Berlin, using just a two-track Revox tape recorder. The lineup of Tangerine Dream included Tangerine Dream’s founder member Edgar Froese, Klaus Schulze and Conrad Schnitzle. They were joined by session musicians Jimmy Jackson and Thomas Keyserling. During October 1969, Tangerine Dream started as they meant to go on. This meant recording a genre defying album.

The followup to Electronic Meditation was Alpha Centauri. This was the album that saw Christopher Franke make his Tangerine Dream debut. He played his part in a truly groundbreaking album, Alpha Centauri.

Recording of Alpha Centauri too place in early 1971. Then in March 1971, Alpha Centauri, which is best described as a spacey, atmospheric soundscape was released to critical acclaim. It’s a timeless album, one that it’s hard to believe was recorded forty-four years ago. It has stood the ravages of time, and is a tantalising taste of what was still to come from one of music’s most innovative groups.

Zeit was the first Tangerine Dream to feature what became known as the group’s classic lineup. They recorded some of Tangerine Dream’s best music. That’s quite a statement, given how prolific Tangerine Dream were. They would record over sixty-five studio albums and a further sixty soundtracks. Then there’s countless live albums. Each album shows Tangerine Dream’s music evolving.

That was the case with Zeit. The music was slower, and much more atmospheric. It was also way innovative, and way ahead of its time. Indeed, on Zeit, Tangerine Dream pioneered the drone music that’s seen as cutting edge in 2015. Tangerine Dream always were ahead of the musical curve. So much so, that Zeit is now regarded as a timeless, Krautrock classic. This wouldn’t be Tangerine Dream’s only classic album.

Following Zeit, the musical changelings continued to change direction. Atem, which marked the end of Tangerine Dream’s “Pink Years,” was a much more eclectic album. It veered between the slow, atmospheric tracks of previous albums, right through to much more experimental, aggressive tracks.

While Atem saw Tangerine Dream make a commercial breakthrough in Britain, Phaedra was a game-changer of an album. Phaedra was the first Tangerine Dream album to feature their sequencer driven sound. It was also the album that launched the Berlin School sound.

As recording of Phaedra took place during December 1973, Tangerine Dream decided to improvise on what would become the title-track. However, before long, problems started to arise. As the temperature rose in the studio, oscillators started to detune. This resulted in a marked change in the sound. This happy accident played an important part in Phaedra’s sound. Other tracks, including Movements Of A Visionary, showcased the nascent technology. This included a Moog synth. It played its part on what critics called one of the most important electronic albums in musical history.

On the release of Phaedra, on 20th February 1974, critics called the album a classic. It also struck a nerve with record buyers. Phaedra reached number fifteen in Britain and was certified gold. After five albums Tangerine Dream had struck gold. It looked like they were on their way to becoming part of rock royalty.

Having made the all important breakthrough, Tangerine Dream were determined to prove that Phaedra wasn’t a one off. So, they began work on their sixth album Rubycon.

Rubycon was very different from previous Tangerine Dream albums. It consisted of just two lengthy tracks. Each lasted just over seventeen minutes. This meant each track filled one side of Rubycon. The two tracks, Rubycon (Part One) and Rubycon (Part Two), were written by Edgar Froese, Christopher Franke and Peter Baumann. They recorded Rubycon at Richard Branson’s The Manor Studio, in Shipton-on-Cherwell.

At The Manor Studio, the three members of Tangerine Dream began recording and producing what became Rubycon. Edgar Froese played mellotron, guitar, a VCS 3 synth and gong. Christopher Franke played a similarly eclectic collection of instruments. This included a double Moog synth, organ, prepared piano, Synthi A and gong. Peter Baumann played an organ, Synthi A, Fender Rhodes, piano and ARP 2600. With this eclectic selection of instruments at their disposal, the result was another critically acclaimed album from Tangerine Dream.

On Rubycon’s release, critics hailed it another innovative album from Tangerine Dream. Record buyers agrede. Rubycon reached number fourteen in the UK. Despite this, Rubycon didn’t sell as well as Phaedra. However, Rubycon was still commercially successful and critically acclaimed.

Rubycon (Part One) opens Rubycon. The arrangement has an eerie, haunting cinematic sound. It’s slow and spacious. Washes of synths shimmer, gentle stabs of keyboards add a sense of urgency and drama. Soon, the arrangement is beginning to sound like the soundtrack to a lost horror film. Then all of a sudden, it’s akin to an awakening, as the arrangement becomes ethereal and elegiac. As the arrangement coos, shimmers and glistens, it then takes on a futuristic, sci-fi sound. Before long, Tangerine Dream have transformed the arrangement. It stretches its legs, lazily unfolding, and allowing you a glimpse of its hidden depths. Later, it becomes dark and ominous, as it drives and pulsates along. By now, there’s a Krautrock influence. Still, however, the music has a dark, atmospheric and cinematic sound. Later, arrangement drives along. Gone is pulsating sound, but the drama remains. It’s as if Tangerine Dream are providing the soundtrack to a long forgotten film.

Washes of synths assail you as Rubycon (Part Two) unfolds. They come towards you, assailing and surrounding you. It’s as if the end is neigh. Their ominous sound is like a battalion of otherworldly creatures droning above you, just waiting to spring some unpleasant surprise. Then the music changes. It becomes ethereal and elegiac. What sounds like a choir angels sweeps down, trying soothe your fears. Before long, the music takes on an almost spiritual quality. Soon, it’s all change again. The arrangement pulsates and pumps along. What follows makes Tangerine Dream sound like the rightful Godfathers of modern electronic music. This is techno, long before the term was coined. Later, Rubycon (Part Two) in a different direction. It sounds like a cinematic soundscape, where the listener supplies the scenes to music. From there, the music on this seventeen minute epic veers between  evocative and atmospheric, to moody and broody, right through to ethereal and elegant to dark and dramatic. As Rubycon (Part Two) and therefore, Rubycon draws to a close, you long to hear more from of the same from Tangerine Dream. Rubycon has been a tantalising taste of what Tangerine Dream are capable of.

Eight years after Tangerine Dream had been founded by Edgar Froese in 1967, they were one of the most innovative groups of the seventies. Rubycon was their sixth album, and is a genre-defying album featuring two epic soundscapes lasting seventeen minutes each. They see Tangerine Dream, the original musical butterflies, toying with disparate musical genres on the two soundscapes. Everything from psychedelia, Krautrock, Berlin School, progressive rock, ambient, avant-garde, experimental, new age and electronica can be heard on Rubycon, a truly captivating, innovative and timeless album. That’s not all.

Listening again to Rubycon, it’s quite unlike most of the studio albums released during 1974. Instead, Rubycon sounds like a soundtrack album, something Tangerine Dream would become famous for. They released over sixty soundtrack albums. Along with live albums, that was one of their specialities. Rubycon, Tangerine Dream’s sixth album, is a reminder of that.

Rubycon has that cinematic quality that a good soundtrack album has. No wonder. It has everything a good soundtrack album needs. The music is variously atmospheric, eerie, evocative, haunting and spacious. Slowly, the arrangement shimmers and glistens, before becoming ethereal and elegiac. Other times, the music is dark, dramatic and ominous, before heading in the direction of a futuristic, sci-fi sound. Constantly, Tangerine Dream, musical adventurers extraordinaire, dare the listener to second guess them. It’s not worth trying. Instead, sit back, and enjoy the music. Let it was over you, and immerse yourself in its beauty and drama. Listen to, and enjoy, Rubycon’s subtleties and nuances, as slowly, and gradually they begin to unfold. However, it’s impossible to discover all of Rubycon’s delights in one listen.

No. It takes time, and several listens to discover the many delights of Rubycon, an epic, genre classic. Rubycon was, without doubt, one of Tangerine Dream’s best albums. It’s a classic of the Berlin School, and essential listening for anyone interested in either electronic music, Krautrock or prog-rock. These three genres shine through on Rubycon. So do ambient, avant-garde, free jazz, psychedelia and rock. All these genres play their part in one Tangerine Dream’s finest hours, Rubycon, which is the perfect introduction to one of the most progressive, influential and innovative bands of the past fifty years, Tangerine Dream. 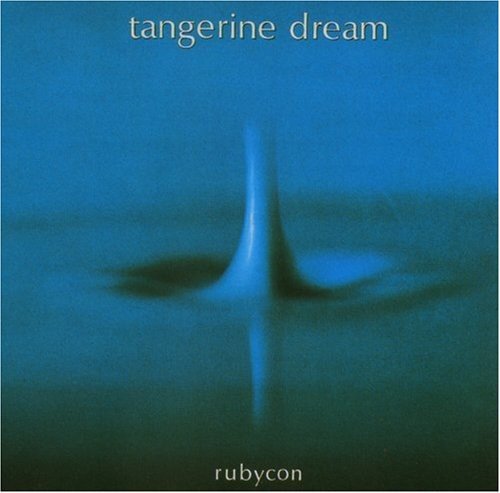