In 1973, Melvin Sparks entered the studio with producer Bob Porter, and an all-star band and recorded his fourth album Texas Twister, which was released later that year. It’s an oft-overlooked album which is a reminder of the late, great jazz guitarist Melvin Sparks, who sadly passed away in on March the ’15th’ 2011, just before his sixty-fifth birthday.

Melvin Sparks was born in Houston, Texas, on March the ‘22nd’ 1946, into what was a musical family. His two brothers both played guitar, and his mother ran a cafe which was a favourite hangout for local musicians. This included Don Wilkerson, Stix Hooper and Cal Green, who would prove supportive of Melvin Sparks and influenced him later in his career.

At the age of eleven, Melvin Sparks received his first ever guitar, and by the time he was in high school, was playing in his first band alongside organist Leon Spencer. Within a few years, seventeen year old Melvin Sparks had left school and embarked upon a career as a processional musician.

By 1970, Melvin Sparks signed to Prestige, where he was reunited with his old friend and former high school bandmate Leon Spencer Jr, who was also signed to the label. The pair would play on each other’s albums over the next couple of years.

Having signed to Prestige Records, twenty-seven year old Melvin Sparks soon, began work on his much-anticipated debut album, Sparks! He was paired with producer Bob Porter who by 1970, had already established the Prestige soul-jazz sound. Now they had to choose the songs that suited this sound.

Just like many albums of soul jazz, cover versions were often the order of the day. That was the case with Melvin Sparks’ first album of Prestige soul-jazz, which featured Sly Stone’s Thank You For Being Myself, Rogers and Hart’s I Didn’t Know What Time It Was and Leiber and Stoller’s Charlie Brown. However, Melvin Sparks had decided to record The Stinker which was written by his old friend and now label mate Leon Spencer Jr, who was also part of all-star band that recorded Sparks!

Before the release of Sparks!, critics had their say on Melvin Sparks debut album, which was an album of soul-jazz that headed in the direction of pop. Sparks! was well received by critics, and when it was released in later 1970, it was hoped that it would launch Melvin Sparks’ solo career. However, despite the favourable reviews, Sparks! failed to find a wider audience which was a disappointing start to Melvin Sparks’ career at Prestige. 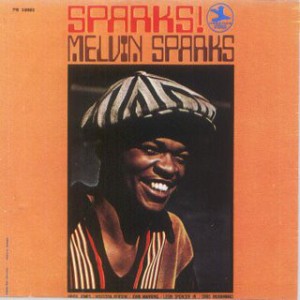 After the commercial failure of his debut album Sparks!, Melvin Sparks went away and wrote Spark Plug, Conjunction Mars and Dig Dis which would featured on his sophomore album Spark Plug. These three tracks were joined by covers of Gene Redd’s Who’s Gonna Take The Weight? and Schwartz and Dietz’s Alone Together.  The songs that became Spark Plug were recorded by many of the musicians that featured on Sparks!

Drummer Idris Muhammad, organists Leon Spencer Jr and Reggie Roberts, trumpeter Virgil Jones and tenor saxophonists Grover Washington Jr join guitarist Melvin Sparks. Taking charge of production on Spark Plug was Bob Porter, as a much more laid back, but funky album of soul-jazz took shape. This was similar to the Prestige “sound” that had evolved over the last few years under Bob Porter. Melvin Sparks was the latest purveyor of the Prestige sound.

Just like his debut album Sparks!, Sparks Plug, was well received by critics, and many thought that Melvin Sparks was one of Prestige’s rising stars. However, when Melvin Sparks released Sparks Plug later in 1971, the album wasn’t the commercial success that Prestige nor Melvin Sparks had hoped. For both parties, this was hugely disappointing.

With neither Sparks! nor Spark Plug proving particularly popular, Melvin Sparks was well aware that his third album Akilah!, was make or break for him at Prestige. Melvin Sparks was still regarded as one of Prestige’s rising stars, but he had still to make a breakthrough. It was a case of now or never as Melvin Sparks began work on Akilah!

For his third album, Melvin Sparks had written four new tracks, On The Up, All Wrapped Up, Akilah and Blues For JB. They were joined by Leon Spencer Jr’s The Image Of Love and Gene Redd and Kool and The Gang’s Love The Life You Live.

By the time Melvin Sparks recording his third album, producer Bob Porter had left Prestige, and this time, he was joined in the  studio by Ozzie Cadena who supervised the recording of Akilah! This wasn’t the only change, as a very different band accompanied Melvin Sparks during the Akilah! sessions.

With Akilah! completed, Melvin Sparks’ third album was scheduled for release later in 1972, and again, just like his two previous  well received by critics upon its release. However, history repeated itself, and Akilah! failed to find the audience that it deserved. This was a huge blow for Melvin Sparks, who left Prestige later in 1972. 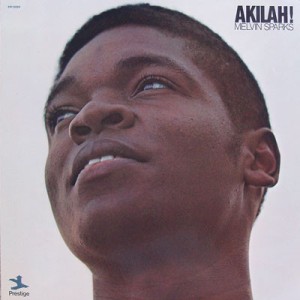 After signing to Eastbound Records, began work on his fourth album Texas Twister with his old mentor and producer Bob Porter.  Melvin Sparks hoped that renewing his partnership with Bob Porter might kickstart his career.

For Texas Twister, Melvin Sparks wrote four new compositions Whip! Whop!, Judy’s Groove, Texas Twister and Star In The Crescent. They were joined by Bobby Graham’s Gathering Together, Billy Eckstine’s Want To Talk About You and Brian Potter and Denise Lambert’s Ain’t No Woman (Like The One I Got). These seven tracks became Melvin Sparks’ Eastbound Records’ debut Texas Twister.

No expense was spared for the recording of Texas Twister which was produced by Bob Porter and was recorded by band that featured some top musicians. The rhythm section of drummer Idris Muhammad, bassist Wilbur Bascomb and guitarists Ron Miller. They were joined by organist Caesar Frazier, Sonny Phillips on Fender Rhodes and Buddy Caldwell on bongos. A horn section that featured baritone saxophonist Ed Xiques, tenor saxophonist Ron Bridgewater and trumpeters Cecil Bridgewater and Jon Faddis was the final piece of the jigsaw. Melvin Sparks played his trusty Guild guitar on Texas Twister which was meant to be the start of a new era for him.

Whip! Whop! which opens Texas Twister is a much funkier track, and it’s as if Melvin Sparks with the help of producer Bob Porter, was in the process of reinventing himself, as funk was growing in popularity by 1973. Gathering Together features a guitar masterclass from Melvin Sparks who plays with speed and fluidity and is accompanied by tight, rasping horns as the rhythm section drive the arrangement along. Judy’s Groove is a slice of swinging soul jazz where drummer Idris Muhammad is responsible for the ambling beat as Melvin Sparks and his band showcase their skills and versatility.

Melvin Sparks unleashes a breathtaking and fluid solo on Texas Twister, before blazing horns and the Hammond organ enjoy their moment in the sun, and play their part in the sound and success of the title-track. The tempo drops on Ain’t No Woman (Like The One I Got), and the horns take centre-stage and are augmented by a subtle Fender Rhodes before Melvin Sparks delivers another spellbinding solo. It takes centre-stage, and sometimes, he’s joined by the horns who provide the perfect accompaniment on the track that was released as a single. I Want To Talk About You continues with the soul-jazz sound, albeit with a Latin twist, while the album closer Star In The Crescent marks a return to the bop-driven sixties soul-jazz style. It ensures Texas Twister ends on a memorable high.

Despite being well received by critics, who thought Texas Twister Melvin Sparks’ finest album, it failed to find an audience when it was released later in 1973. History had repeated itself again, and Melvin Sparks who had just released his fourth album Texas Twister was still looking to make a commercial breakthrough.

Nowadays, Texas Twister, which was released by Eastbound Records in 1973, is regarded as Melvin Sparks’ finest hour. Sadly, this Latin-tinged album of funky soul-jazz wasn’t a commercial success and original copies of Texas Twister are extremely rare. It features Melvin Sparks at the peak of his powers, as he leads a crack band of that features the great and good of seventies jazz on his cult classic Texas Twister.