Popol Vuh were one of a number of groundbreaking bands who were formed in West Germany in the early seventies, and over the next three decades established a reputation for releasing innovative music that influenced the next generation of musicians. This was the case from the release of Popol Vuh’s 1970 debut album Affenstunde, right through to their twentieth album Messa Di Orfeo, which was released in 1999 and was their swan-song.

Messa Di Orfeo is a reminder of one of the legenary German bands. Popol Vuh should  be held in the same regard as Can, Cluster, Harmonia, Kraftwerk, Neu and Tangerine Dream, who Florian Fricke later joined. Just like each of these bands, Popol Vuh’s music has played an integral and important part in German musical history. Part of Popol Vuh’s success, was keyboardist Florian Fricke.

Florian Fricke was born in Lindau Am Bodensee, West Germany on the ‘23rd’ of February 1944. Growing up, Florian Fricke learnt to play the piano, and quickly, had mastered the instrument. When he left high school, Florian Fricke    studied piano, composition and directing at the Conservatories in Freiburg and Munich. By then, Florian had two new passions.

The first was music, which was one of Florian Fricke’s passions in life. Especially new music, and this included free jazz, which Florian Fricke embraced. He through himself into this new musical genre, and quickly, realised its potential and possibilities. However, there was more to Florian’s life than making music.

In his spare time, Florian Fricke had started to make short films. Although it was just a hobby, he would later become a film critic for the Swiss newspaper Neue Zürcher Zeitung. By then, he had already some experience as a critic.

When he was a student, Florian Fricke was the music critic for Der Spiegel, a German magazine. Music and art seemed to dominate Florian Fricke’s life.

That was the case when Florian graduated. In 1967, Florian Fricke met film director Werner Herzog, and the two became friends, Just a year later in 1968, Florian Fricke landed a part in Werner Herzog’s film, Lebenszeichen. This was just the start of their relationship. They would reunite in 1972, but before that, Florian Fricke formed Popul Vuh in 1970.

Joining Florian Fricke in Popol Vuh, were percussionist Holger Truelzsch and fellow synth player Frank Fiedler. All the nascent group took its name from an ancient, sacred, Mayan manuscript. With a name in place, Popol Vuh began work on Affenstunde, the first of twenty albums they released.

From the earliest days of Popol Vuh, Florian Fricke established himself as the group’s leader. He had been one of the first musicians to own a Moog II synth which wasn’t an easy instrument to “tame.” Florian Fricke, a talented keyboardist soon got to grips with what was cutting edge technology. However, it was the Moog II would be used extensively on Popol Vuh’s debut album Affenstunde.

Recording of Affenstunde took place at Bavaria Music Studio, in Munich, where  Popol Vuh were joined by Bettina Fricke. She produced Affenstunde with Gerhard Augustin and the producers guided the nascent group through their debut album. It featured just four tracks that were innovative and influential tracks. Especially Affenstunde, a near nineteen minute epic, which took up all of side two.

When Affenstunde was released later in 1970, the album was described variously as space rock and cosmic music. It was very different to much of the music being released. While there were other like-minded groups releasing similarly innovative and influential music  very few would enjoy the longevity of Popol Vuh.

Popol Vuh’s third album, Hosianna Mantra was released in 1972, but passed many critics and record buyers by. By them, Popol Vuh’s lineup changed for the first time, and . Florian Fricke was the only remaining original member of the band left. Over the next three decades there were many more changes in the lineup, which is is best described as fluid.

That didn’t seem to matter as Hosianna Mantra featured music that was timeless, spiritual and innovative. Sadly, it went almost unheard of outside Germany. It was only later, that Hosianna Mantra found the audience it so richly deserved. However, Hosianna Mantra wasn’t the only album Popol Vuh released during 1972 after Florian Fricke renewed his friendship with Werner Herzog.

Before that, the German music scene was thriving during the seventies, and Popol Vuh released an album every year of the seventies. Very rarely, did they disappoint. The nearest they came was with 1973s Seligpreisung which  received mixed reviews from critics.

Popol Vuh more than made up for this with 1974s Einsjäger und Siebenjäger which is now recognised as one of their best albums of the seventies. The followup Das Hohelied Salomos was released in 1975, and featured Popol Vuh showcasing New Age music. Constantly, it seemed Popol Vuh reinvented their music. However, later in 1975, Popul Vuh returned to the world of soundtracks and penned the soundtrack to Werner Herzog’s latest film, Aguirre, The Wrath Of God. The soundtrack, Aguirre became Popol Vuh’s seventh album since 1970.

In 1976, Popol Vuh returned with their eighth album, Letzte Tage–Letzte Nächte was released to critical acclaim, and ensured that Popol Vuh were seen as purveyors of ambitious, exciting and groundbreaking music. Partly, that was down to Popol Vuh’s determination to push musical boundaries to their limits.

Popol Vuh’s reputation was further enhanced when they recorded the soundtrack to Werner Herzog’s movie Herz aus Glas in 1978.

Later in 1978, Popol Vuh released Brüder des Schatten–Söhne des Lichts which they had recorded in August of 1978. When it was released on Brian Records, critics embraced the Gerhard Augustin produced album. Despite the critical acclaim lavished on their albums, still many people were unaware of Popol Vuh.

Fortunately, Popol Vuh were about to write and record the soundtrack to another film directed by Werner Herzog,  Nosferatu. This exposed Popol Vuh’s music to a wider audience, and Nosferatu was hailed as one of their finest soundtrack albums, and Popol Vuh’s penultimate album of the seventies.

Die Nacht der Seele, which was subtitled tantric songs, was released to critical acclaim in 1979, and was a fitting way for Popol Vuh to close the seventies. Incredibly, Die Nacht der Seele was Popol Vuh’s twelfth album since they formed in 1970.

When they did, it was with Agape-Agape. The album was released on the Norwegian label Uniton. Agape-Agape found Popol Vuh creating music that was variously, beautiful, captivating, dramatic and as one would expect from Popol Vuh, groundbreaking. It won the approval of critics, but didn’t find a wide audience. Sadly, neither did Florian’s debut solo album.

After thirteen years as a professional musician, Florian Fricke somewhat belatedly, released his much-anticipated debut album Die Erde Und Ich Sind Eins in 1983. Despite his status as one of the most innovative German musicians of his generation, Florian Fricke found himself releasing Erde Und Ich Sind Eins as a private pressing. Just like Popol Vuh, he wasn’t getting the credit he deserved. Meanwhile, Can, Kraftwerk and Neu! were receiving all the plaudits. Despite that, Popol Vuh and Florian Fricke continued to make music.

1985 saw Popol Vuh release the fifteenth album of their career, Spirit Of Peace which was released on the French label, Spalax. Despite its quality, and how highly regarded their music was by some critics, Popol Vuh albums weren’t selling in vast quantities. So when Warner Herzog used We Know About The Need The as part of the soundtrack to Dark Glow Of The Mountains, this was welcomed by Popol Vuh.

It wasn’t until 1991 that Popol Vuh released another album. Again, it was a soundtrack album. This time, the soundtrack was for the film For You and Me and was described as: “a celebration of world music.” For You and Me showcased Popol Vuh’s versatility and ability to switch between genres. However, some critics didn’t seem to “get” the music, and again, reviews were mixed., and it was another four years before Popol Vuh returned.

Before that, Florian Fricke released another solo album. This time, it was an album of classical music. Florian Fricke Plays Mozart was released in 1992, and showcased another side to the Popol Vuh leader. Unknown to some people, Florian was a keen student of classical music and had studied music at the Conservatories in Freiburg and Munich, and just as comfortable playing classical music than working with Popol Vuh. So in his down time from Popol Vuh, Florian often composed piano pieces, However, in 1995 Popol Vuh returned with their eighteenth album.

City Raga had been recorded at the New African Studios, in Munich by Florian Fricke, Guido Hieronymus, and Maya Rose who had  composed the seven tracks. This latest lineup of Popol Vuh were joined by Daniel Fichelscher and the Kathmandu Children’s Choir. The result was a captivating album from Popol Vuh.

Another two years passed before Popol Vuh returned with their nineteenth  Shepherd’s Symphony-Hirtensymphonie. Again, Popol Vuh’s lineup had changed. They were still a trio featuring Florian, Guido Hieronymus and Frank Fielder, who would later collaborate with Florian Fricke. Before that, the latest lineup of Popol Vuh headed off into the studio.

The three members of Popol Vuh made their way to Afro Sounds Studio, in Munich and between September 1995 and March 1996 recorded Shepherd’s Symphony-Hirtensymphonie. It was released in 1997 and wowed critics.

Popol Vuh’s swan-sonn was Messa Di Orfeo which was recorded at an audio-video light installation in the Labyrinth of Molfetta, Bari, Apulia  on the ‘20th’ of September 1998. The  nine tracks were written, directed and produced  by keyboardist Florian Fricke with Maya Rose taking charge of vocals and featured a recitation  from Guillermina De Gennaro. Taking  charge of production were Popol Vuh and Time Zones.

The following year Spallax Muisc released Messa Di Orfeo which was mixture of cinematic music and  drama. Meanwhile, Popol Vuh combined elements of ambient, avant-garde , Berlin School, and electronic music. There’s even elements of New Age and world music that provided the soundtrack to audio-video-light installation that was a one-off.

Popol Vuh rarely performed live because Florian Fricke felt it was impossible to sustain the level of intensity required during a  concert. Instead. he preferred to spend his time writing and recording. However, Messa Di Orfeo was a magical and mesmeric fusion of mysticism and music that has special properties.

Popol Vuh deploy healing energy via sound on Messa Di Orfeo. and this similar to the ambient pieces on their albums Fitzcarraldo and Cobra Verde. The music on Messa Di Orfeo was breathtakingly beautiful and when it was released in 1999 a fitting finale for musical pioneers Popol Vuh .

Little did anyone realise that Messa Di Orfeo was the end of an era for Popol Vuh, and German music. In 2001 Florian Fricke passed away ahed just fifty-seven . That day music last one of its pioneers Florian Fricke,

Throughout a career that spanned three decades Florian Fricke led Popol Vuh as they released music that was innovative and influential. Constantly, Popol Vuh pushed musical boundaries, and constantly reinvented their own music and their back catalogue is best described as eclectic. Maybe, that’s because Popol Vuh’s lineupwas  constantly evolving?

With a lineup that can only be described as fluid, Popol Vuh release some of the most groundbreaking music of the seventies and eighties. That period, was what many regard as the golden era of German music.

Sadly, Popol Vuh often didn’t get the credit they deserve, and instead, Ash Ra, Can, Cluster, Kraftwerk and Harmonia received the plaudits. To some extent, Popol Vuh, who were much more prolific than most of their contemporaries, are the forgotten group of the golden era of German music. Popol Vuh’s swan-song was Messa Di Orfeo, which is regarded as a cult classic, and brought the curtain down on a career where they always released albums that were innovative, inventive and influential. 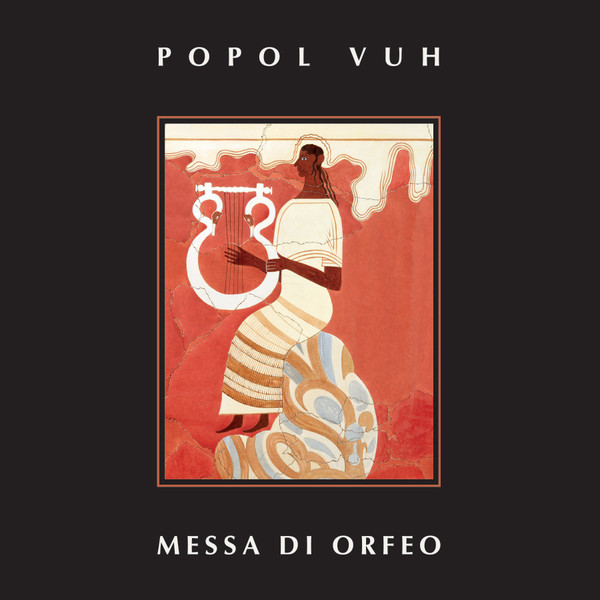