Too often, Stomu Yamashta’s role in the popularisation of world music is overlooked by critics and cultural commentators. They forget that Stomu Yamashta helped popularise world music back in the sixties. Right through to the seventies, Stomu Yamashta was one of the leading lights in the burgeoning world music scene. That was way before world music was supposedly born in the late seventies and early eighties. By then, Stomu had been fusing traditional and popular music for two decades. He had also released a string of cutting edge albums. That’s not to mention his work with supergroup Go. Stomu Yamashta was one of the biggest names in Japanese music. This didn’t surprise people who had been following his career.

Stomu Yamashta was born Tsutomu Yamashita, in Kyoto, Japan, on 15th March 1947. Growing up, he played drums and percussion. Very quickly, Stomu Yamashta found his own unique style. He perfected this during his studies at Kyoto University, Julliard School Of Music and Berkeley School Of Music. Before long, he was being recognised as an pioneering musician.

In 1969, Seiji Ozawa was conducting the Chicago Symphony Orchestra. Stomu Yamashta was asked to make a guest appearance. This was a huge honour for twenty-two years old Stomu Yamashta. Most musicians would’ve been intimidated at the thought of rubbing shoulders with such talented musicians. Not Stomu. He stole the show, delivering what Time Magazine called a “virtuoso performance.” Coming from such an esteemed publication, that was high praise indeed. What a way to close the first decade of Stomu Yamashta’s career.

As the seventies began to take shape, Stomu Yamashta’s star was very definitely in the ascendancy. Stomu was in demand as a collaborator.

Stomu and Japanese jazz pianist Masahiko Sato collaborated on Metempsychosis, which was released on Columbia. This album of groundbreaking jazz music was released in 1971. It was a fusion of avant garde, free jazz and modern classical. Critics were won over by this cutting edge collaboration. Later in 1971, Stomu released his debut studio album as a solo artist.

Percussion Recital was released on Columbia, in June 1971. Critics hailed Percussion Recital an inventive, genre melting album. Elements of abstract, experimental and free jazz melt into one. That’s the case from Variations From Odoru Katachi which opens side one, right through to Uzu, which closes side two. It’s a groundbreaking album, one that’s assured and innovative album, one that forty-four years later, has stood the test of time. So has his first live album,

The World Of Stomu Yamashta was released in April 1971, on Columbia. It had been recorded in the small hall of the Tokyo Metropolitan Cultural Hall on January 11th 1971. When The World Of Stomu Yamashta was released three months later, this groundbreaking release showcased one of Japanese music’s rising stars. For many record buyers, this was their introduction to the Kyoto born composer, songwriter and musician. Before long, a followup was released.

Uzu: The World Of Stomu Yamash’ta 2 was released in August 1971. Exaedros I opened the album, before Stomu improvised on Nenbutsu and UZu. It was a spellbinding and imaginative performance. Especially given Stomu’s unique and innovative style of drumming. Critics eagerly awaited the release of Stomu’s next studio album.

Work began on Red Buddha in 1970. For Red Buddha, Stomu had composed two new tracks, Red Buddha and As Expanding As. Both tracks were lengthy, filling a side of the album. Red Buddha saw Stomu deploy a myriad of disparate instruments. Metal strings, were joined by tambura, cymbal, musical saw and mandolin harp. Then on As Expanding As, Stomu combined a steel drum and skin drum with a marimba, cow bell and wood block. The result was music that was bold, ambitious and innovative. Red Buddha was released later in 1971, and further enhanced Stomu’s reputation.

When critics heard Red Buddha, they were won over by Stomu Yamashta’s ability to create music that was not just groundbreaking, but captivating and ambitious. It seemed with each album, Stomu was trying to reinvent himself as a musician. That becomes apparent as the musical adventure that is Red Buddha begins.

Just understated drums pitter patter as the meditative Red Buddha begins. The drums are panned hard left, while instruments flit in and out. A musical saw, metal strings, tambura and cymbal can be heard. Some make a brief appearance, others are here to stay. However, it’s the mesmeric drums that take centre stage. Mostly, the tempo stays the same. Sometimes, it rises, as if in response to the otherworldly, futuristic and sometimes industrial sounding arrangement. Other times the arrangement veers between melodic to challenging. Always, Stomu ensures that the music captivates. Not once does one’s attention wander. There’s almost a hypnotic and cinematic quality. Then later, the arrangement reaches an urgent and dramatic crescendo, before returning to its understated sound.

As Expanding As has a similarly understated arrangement. It’s just the drums that play slowly and hypnotically. They too are panned hard right. This leaves the rest of the arrangement free for Stomu to deploy his eclectic and disparate selection of instruments. They play their part in what’s a melodic but almost industrial sounding arrangement. Instruments are dropped in and out. Some are instantly recognisable, including a wood block, skin drum and steel drum. Other times, Stomu disguises their sound, transforming it totally. By then, elements of avant garde, experimental, improvisation and industrial music are being combined. Later, as a marimba interjects, an alternative, industrial orchestra provide a backdrop. They boing, drone, beep, buzz and jingle. The marimba rings out, providing a contrast as what sounds like a siren sounds. An element of urgency and drama is added as As Expanding As reaches a dramatic climax, before returning to the earlier understated and spacious sound. This is similar to Red Buddha, another track where Stomu Yamashta pushed musical boundaries to their limits, and sometimes, way beyond.

By the time Stomu Yamashta released Red Buddha in late 1971, his star was very much in the ascendancy. He had already released a studio album, Percussion Recital and two live albums. He had also collaborated with Masahiko Sato on the album Metempsychosis. His most recent venture was founding the Red Buddha Theatre Company. It took its name from Stomu Yamashta’s sophomore album Red Buddha.

Stomu Yamashta recorded Red Buddha in 1970. A year later, this groundbreaking and ambitious album was released. The music is variously captivating, challenging, cinematic, hypnotic, dramatic and urgent. Other times Red Buddha is melodic and meditative. It’s a timeless album, one that was way ahead of its time.

So much so, that it’s hard to believe that Red Buddha is forty-nine years old. Stomu Yamashta was a musical pioneer. He was way ahead of the industrial music pioneers of the mid-seventies. Red Buddha incorporates a proto industrial sound. However, it’s much more melodic than the industrial music that came a few years later. There’s also elements of ambient, avant garde, drone, experimental and free jazz on Red Buddha. That’s not forgetting world music, which Stomu Yamashta Stomu had pioneered since the sixties. It shines through on Red Buddha, which was the most innovative album of Stomu Yamashta’s nascent career. 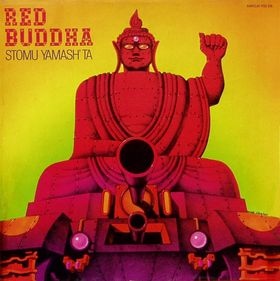