It features twenty-four tracks including ten rarities and fourteen unreleased tracks. This includes contributions from The Ventures, The Marksmen, The Velvetones, The Chancellors, The Mus-Twangs, The Road Runners and Cecil Moore and The Notes. Their contributions will take the listener back to a time when  instrumentals were King, and commonplace on the charts on both sides of the Atlantic.

The “golden age” of instrumentals  began around 1956 and exploded when Duane Eddy released his debut single Movin’ and Groovin’ in March 1958.

After that, instrumentals were commonplace on the British and American charts. Whether it was  twangy,  jangling guitars or honking saxophones, instrumentals were big sellers for The Ramsey Lewis Trio, Booker T. and The MGs, The Shadows, Don Costa and Spencer Ross all enjoyed huge hits. So did Johnny and The Hurricanes, The Ventures, The Titans and Dick Dale and The Deltones who released a variety of instrumentals that became hits.There were all types of instrumental hits from pop, rock and surf to jazz and R&B. However, the twenty-four tracks on More Long-Lost Honkers and Twangers weren’t huge hits.

Opening the compilation is Guitare Jet, a track by the Canadian group Les Jaguars. This is a track from their 1965 album Les Jaguars Volume 2. The track is powered along by Jean-Guy Cossette’s lead guitar which is akin to a musical jet engine on this hidden gem of an album track .

The Mus-Twangs were a Chicago-based group whose name was a homage to Duane Eddy. Sadly, this talented band was short-lived,  and they only released two singles during 1961 and split-up in 1962 when they failed to make a breakthrough. However,  during their time together The Mus-Twangs recorded two other  instrumentals during 1961 that were never released. This include the cinematic sounding Wolf Pack and Zanzibar which sounds as if it was influenced by The Shadows before a blazing saxophone adds an elements of drama. Both of these tracks showcase a talented group whose music will belatedly be heard by the audience it deserves.

Mirage was recorded by The Night Caps in 1963, but never released. That was despite this talented quintet sounding like Johnny and The Hurricanes, who back then, were still a popular group.

One of the best known  groups on the compilation are The Ventures who feature four times. There’s two unreleased tracks Louisiana from 1963 and a 1971 cover of Van Morrison’s Blue Money which is a real find. Both tracks are recent discoveries. The alternate takes are Blue Tail Fly from 1962 and a cover of Petula Clark’s Downtown from 1970 where the track is transformed and taken in a  new direction.

Nokie Edwards is best known as The Ventures’ guitarists and in Japan, he was known as The King Of Guitars. However, away from the Ventures he had a side-project The Marksmen, which featured guitarist Gene Moles and drummer Bill Marshall. The Marksmen contribute three tracks recorded in 1962 Sunny River, Peace Pipe and Nokie’s Fenokey which are a further reminder of how good a guitarist Nokie Edwards  was.

Zombie Surfer was recorded by The Ramrods in 1963. They were from Birmingham, Alabama who were a popular surf band who recorded the genre classic Night Ride. At the same session the band recorded Zombie Surfer which with its uber heavy fuzz guitar is a hidden gem that us one of the best of the unreleased tracks.

Although guitarist Billy Strange released a string of solo albums he’s  remembered by many people for his work with the Wrecking Crew. He was working on a session for The Blossoms when he recorded Moon Walking for the Era label. Sadly, this mysterious and mystical  sounding track was never released until now.  It’s a welcome addition to More Long-Lost Honkers and Twangers.

The Velvetones are remembered for the surf instrumentals they recorded during the sixties. However, like a number of bands on the compilation not all the tracks they recorded was released. This includes rhe traditional song Jericho, which was given a surf makeover and totally transformed by The Velvetones  from South California.

Russian Roulette by The Zanies closes More Long-Lost Honkers and Twangers. The track is actually a rocky version of the Russian folk song, Song Of The Volga Boatmen. However, The Zanies transform the song the drums powering it along as twangy, jangling guitar and braying saxophone are combined with the sound of a gun chamber being flicked and revolving throughout the track. When all this is combined the result is a memorable track that closes the compilation on a high.

Just like any other compilation, More Long-Lost Honkers and Twangers is a captivating and memorable voyage of discovery. During this journey, there’s ten rarities and fourteen unreleased tracks from familiar faces and what will be new names for many people. However, this loving curated compilation is the perfect way to discover new music that’s sure to lead to many more musical discoveries along the way.

During this  journey where honkers and twangers sit side-by-side,  there’s many a hidden gem as well as the ten rarities. Compilers Dave Burke and Alan Taylor of Pipeline Magazine have dug deep and discovered a myriad of long lost musical treasure. The result is one of the best compilations of instrumentals of recent years and a fitting followup to Long-Lost Honkers and Twangers.

More Long-Lost Honkers and Twangers, which will be released by Ace Records on the ’28th’ February 2020, is a reminder of the Golden Age of Instrumental Rock ’N’ Roll, when instrumentals were King. 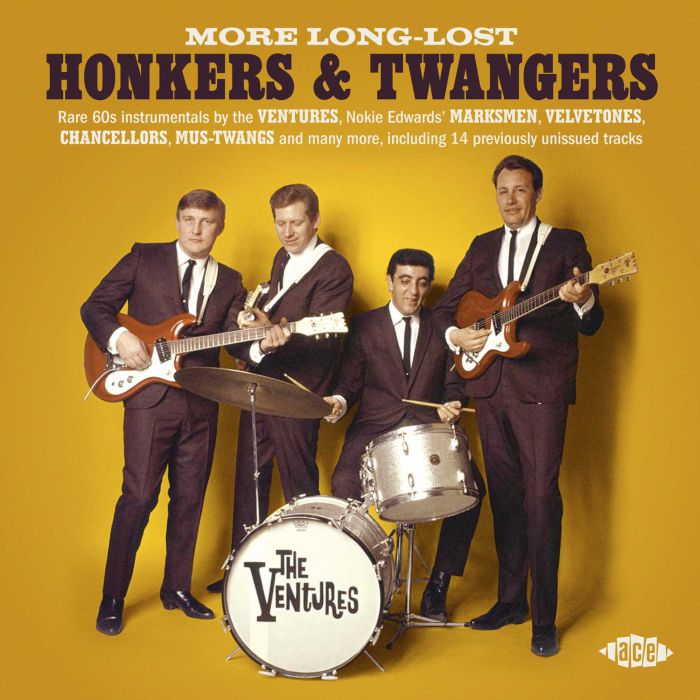