Boddhi Satva was born and spent much of the the early part of his life in Bria in the Eastern part Central African Republic. Soon, he was immersed in music, and spent his time writing, rapping  and producing with the hip hop crew the Gbekpa Crew, which he had founded with his friends. Although Boddhi Satva enjoying being an integral part of the local music scene he wanted his music to be heard much further afield.

When he headed to Belgium in 2000 to continue his studies, his dream of his music reaching a wider audience came true. That was where he discovered something that he quickly became passionate about,…deep house music.

Now that he had discovered deep house, Boddhi Satva started immersing himself in the music. Quickly, he discovered the giants of the deep house scene including  Kevin Yost, Alton Miller, Osunlade and Masters At Work who were soon, among his favourites artists.

Having discovered deep house, Boddhi Satva wasn’t content to just listen to the music and dance to it. Instead, he wanted to make a career out of the music he loved. He decided to embark upon a career as DJ and producer. DJ-ing and producing was how Boddhi Satva was going to earn a living.

That is still the case today.  Twenty years later and Boddhi Satva, the founding father of Ancestral Soul, founder of Offering Recordings and one of the pioneers of modern day African music will release a retrospective double album 18, on BBE Muisc on the ‘20th’ March 2020. It features nearly two decades of innovative music.

In 2006, Boddhi Satva had been working as a DJ and producer for six years when he released his first solo project for Yoruba Records, Bria’s Offering. It was a tribute to Bria, the city he grew up and started making music. This was the first of a number singles and EPs Boddhi Satva released on Yoruba.

Already Boddhi Satva was receiving recognition from his peers in the music industry. Quickly, he established a reputation as a talented producer, one capable of producing  music that had an uplifting quality. He was already in demand  as a remixer and producer. The next step would be for Boddhi to start his own label, Offering Recordings.

Having established Offering Recordings, Boddhi set about releasing quality music, music that was uplifting, had a spiritual quality and carried a message

By 2007, Boddhi Satva had already established a reputation as a talented and imaginative remixer. The Boddhi Satva Ancestral Soul Mix of God Is Love by DJ Pippi vs. Danny Marquez feat. Marcel was released by Bubble Soul Music and showcased his talents as a remixer and his trademark sound.

The flowing year, 2008 was a busy one for Boddhi Satva and two tracks from that year feature on 18. This includes the timeless sounding Manda Island, a track from Afefe Iku’s album Artifacts Of Pottery Vessels. It was released on Osunlade’s Yoruba Records. So was Gabriele Poso’s album  From The Genuine World which featured Until Our Work It’s Done. After the album was released,  the Genuine Remixes EP was released and featured  Boddhi Satva’s Ancestral Remix of Until Our Work It’s Done.  It’s the highlight of the EP and is a truly memorable remix.

2009 was another busy year for Boddhi Satva, who was busy producing his own music and remixing. He released Big Theme on his own label Offering Recording, which was inspired by the Kenny Dope track No Hook. That’s certainly not the case here.  Boddhi Satva remixed Jay Tripwire’s  Into The Shadows and his Ancestral Soul Remix was a dancefloor filler.

Another of his remixes  from 2009 was V’s  Born Again. This time, Boddhi Satva and Mr. V joined forces for the Retouch of Born Again. When Mr. V played the track to Louie Vega who in turns played it to Pete Adarkwah from BBE Music wo released the track. This was the start of a relationship that has continued for over a  decade.

Meanwhile, Boddhi Satva had established and was running his own label Offering Recordings. This didn’t stop Louie Vega, from Masters At Work signing Boddhi Satva to his label in 2010. This was one of the people who inspired Boddhi Satva, and had  fuelled his love of house music.

Louie Vega was by now a Grammy Award winning producer and owner of Vega Records and started introducing everyone to Boddhi Satva’s music. From Miami’s World Music Conference, to London’s Ministry of Sound and everywhere from Amsterdam to Ibiza, music lovers and music industry insiders were introduced to Boddhi Satva and his music.

In 2011, Boddhi Satva’s continued to divide his time between DJ-ing, production and remixing. He was asked to remix Wake With The Day by Koyla featuring Zaki Ibrahim. The Boddhi Satva Afriki Soul Mix takes the song in new and sometimes unexpected directions and showcases a talented and inventive remixer at work.

Later in 2011 Boddhi Satva and Abel Tabu’s Moina Ya Mokili EP was released on Atal Music. The title-track was the first song to feature a vocal from Boddhi Satva. He and Abel Tabu drew inspirations from their respective backgrounds and cultures to create a a powerful, but dancefloor friendly track. It was the perfect way to end the year.

Three months later, in March 2012, Boddhi Satva released Invocation to critical acclaim on BBE Music. It was a truly eclectic collection of disparate music spanning Nu Soul, African Roots and ragga, all with Boddhi Satva’s own unique sound. It recorded during visits to Africa and features Oumou Sangare, Vikter Duplaix, C. Robert Walker, Freddy Masamba  Leslie Kisumuna and Pegguy Tabu. They played their part in an album of uplifting, inspirational and beautiful music, music that crosses and fuses the musical genres.

Followup the release of Invocation, Boddhi Satva returned with the Ode To Ancestral Healing later in 2012 on Offering Recordings. It featured Yuba who can be heard on the spiritual sounding The Depth Of The Source. It’s a welcome addition to 18 and is a reminder of where Boddhi Satva was as a composer, arranger and producer in 2012.

Three years later, and Boddhi Satva released his sophomore album Transition on his own label Offering Recordings. It featured Mama Kosa where Boddhi Satva collaborated with Kaysha. However, one of the highlights of the album was the opening track Papa, which he multitalented and versatile Boddhi Satva who cowrote, arranged, mixed and produced Papa. The song features vocalist Mohamed Diaby who delivers a heartfelt vocal on this beautiful and emotive Boddhi’s late father.

In 2016, Boddhi Satva released Sweet Brown Sugar on Offering Recordings. This was another of his compositions which he also arranged and produced. It features another of Boddhi Satva’s house music heroes E-Man. Yet again, he was getting a chance to work with the people who had inspired him musically.

During 2017, Boddhi Satva who has long been passionate about Gwana music and culture had to travel to Casablanca, in Morocco, where he collaborated with Maalem Hammam on four tracks. This included Belma Belma, a tribute to Gwana culture and spiritually. Belma Belma is also the combination of the colours that known and used for healing purposes in Gwana culture.

Closing 18 is  Kanga Mu a collaboration between Boddhi Satva and Spilulu that features H-Baraka’s vocals. They play their part in what was one of Boddhi Satva’s biggest club hits. By then, Boddhi Satva Kanga Mu  had come a long way since his early days in Belgium when he decided to embark upon a career as a deep house DJ and producer. It was a gamble, but one that had paid off.

Twenty years after embarking upon his career as a deep house DJ and producer, BBE Music will release 18, a two disc retrospective focusing on the first two decades of Boddhi Satva’s career on the on the ‘20th’ of March 2020.  It features seventeen tracks and covers the period between 2006 and 2018.

During this period, Boddhi Satva has gained a reputation as a talented, inventive, innovative and versatile producer and remixer. He’s regarded as the founding father of Ancestral Soul and is  one of the pioneers of modern day African music. Boddhi Satva has also run his own label Offering Recordings for over a decade and released music for the soul, music that helps people forget their worries, fears and pain. Although Boddhi has an almost unique take on music, he doesn’t forget that the music he’s producing is for people to dance to. That is no surprise, as deep house was what inspired him to embark upon a career as a producer.

This is something that Boddhi Satva was born to do, and for twenty years has created music that crosses and often fuses disparate musical genres. During that period, he’s created his own trademark sound, Ancestral Soul . It’s what we’ve come to expect from Boddhi Satva.

Two decades after the founding father of Ancestral Soul, embarked upon a career as a DJ and producer Boddhi Satva is still making music that is dancefloor friendly and also uplifting, joyous, inspirational,  beautiful, powerful and spiritual and 18 is the perfect introduction to his music. 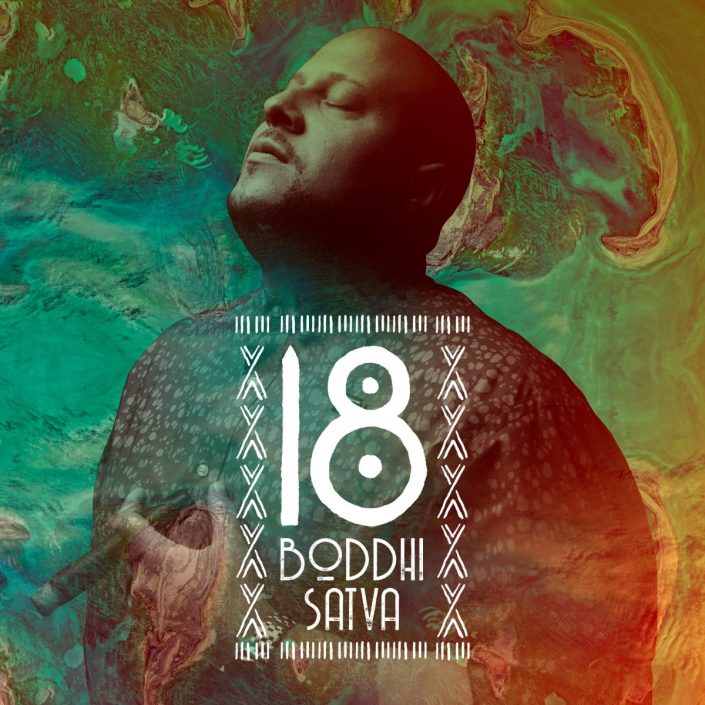