Ever since the sixties, rather than sign to a label, many artists and bands have released their albums as private pressings. However, the majority of the labels releasing private pressings during this didn’t have the same resources as the major labels or even an indie labels.

Sometimes, the label was owned by the artist and it has only been setup for the release of this one album.  Often the  release was only a short run, with anything from 200-300 pressed. The more optimistic artists and groups took a chance and press 1,000-2,000 copies of an album in the hope that they don’t gather dust in a basement, spare room or garage. They tried not to think of that, and instead, hoped that the album was picked up by a bigger label. That was further down the line, and they had albums to sell before that.

The label usually didn’t have a distribution deal, so often the band hauled copies of the album around local record shops, hoping that the owner would take five or ten copies. Often, the best offer was sale or return, and as they looked at store owner, they wondered what were the odds of getting paid or their records back? It was a case of handing over the albums and hoping the vinyl gods smiled on them. If they were lucky, they would get either get some money back, or a pile of dusty vinyl. The alternative didn’t bear thinking about as often, artists and bands had put their savings into a private press and couldn’t afford to lose money.

Given many of the private presses released since the sixties were distributed by the artist or band locally, they never found their way to other parts of the country, never mind halfway around the world. This was all happening in world where before Spotify or You Tube where it’s now possible to find music from all the world in an instant. So every year, thousands of private presses were released to little or no fanfare, and often disappeared without trace.

Especially, if there were only between 50 and 100 copies of an album pressed. With so few copies of an album pressed, it would be easy for the album to disappear without trace and never be heard again. However, that didn’t happen to Hideto Sasaki, Toshiyuki Sekine Quartet + 1’s  groundbreaking J-Jazz cult classic Stop Over, which will be reissued by BBE Music on the ‘27th’ of March 2020. This all-acoustic hard bop album is the sixth instalment in their critically acclaimed J-Jazz series which is curated by Tony Higgins and Mike Peden.

Sometimes, the modern jazz study group headed to what were referred to as jazz training camps. They were held in Kita Kuraizawa, a rural area an hour to the North West of Tokyo. One of the musicians who attended a camp in the spring of 1975 was Toshiyuki Sekine, a twenty year old pianist who was a student at Chuo University. That was where he met Hideto Sasaki who just over a later, would produce Stop Over.

Before that, various jam sessions that took place at the jazz training camps and having heard them, Hiroyuki Inokari decided that he wanted to record an album by the university jazz study group in a recording studio. By then, he had already recorded some of their jam sessions and concerts.  This was the next logical step for him.

Meanwhile, Toshiyuki Sekine’s band had just split up. They were raising stars and had been taking to the stage in some of Tokyo’s jazz clubs, including the Pit Inn. It was the end of an era, and the young bandleader decided to return to the environs of the modern jazz study group.

During the mid-seventies, Japan had a vibrant jazz scene and there were many jazz clubs not just in Tokyo, but across the country. This was perfect for young, up-and-coming artists like the members of the modern jazz study group who were making their way in the world of jazz.

By then, most jazz musicians had gravitated towards fusion, the marriage of jazz and rock. As a result, it wasn’t  unusual to see drums, electric bass and guitars joining forces with synths and saxophones as well as piano and horns. However,  that was not the case on the ‘15th’ of August 1976.

That was when Hideto Sasaki, Toshiyuki Sekine Quartet + 1 entered the studio to record their debut album Stop Over. The line up was  drummer Takashi Kurosaki,  bassist Kei Narita, pianist Toshiyuki Sekine, trumpeter Hideto Sasaki and alto saxophonist Noriyasu Watanabe. This was an all acoustic group who had decided to record an album of material that was similar to what they played in their live sets.

The Smile label had been set up by Akihiro Nakayama, who was a member of the modern jazz study group. Stop Over was the first album released on the label and  it’s thought that there were only between 50 and 100 albums pressed. Most of the them were given away to friends and family of the band and those involved in the making of the album. This wasn’t an album that was going to be available in the record shops of Tokyo and across Japan.

That’s a great shame as this blistering and breathtaking romp through four cover versions and Hideto Sasaki’s Stop Over  as this acoustic combo turn back the clock and revisit the hard bop sound. This was very different to the majority of the albums their peers and contemporaries were making. Maybe, it was a case of playing the music they loved and were passionate about?

Stop Over opens with a cover of  Denny Zeitlin’s Carole’s Garden, which originally, featured on his 1964 album Carnival. However, instead of staying true to the original version, the combo draw inspiration from Jean Luc Ponty’s cover on his 1967 outing Sunday’s Walk and breeze through the track at breakneck speed never missing a beat. It’s a truly impressive performance and Toshiyuki Sekine’s piano playing alone, is worthy of a rapturous round of applause.

Tadd Dameron wrote Soultrane for his 1957 collaboration with John Coltrane’s Mating Call. In the combo’s hands it has a beautiful, melancholy, late night sound. It’s music for those that have love and lost, and those that are yet to find that special one.

Cedar Walton recorded Turquoise Twice for his 1967 album Cedar. On Stop Over, the acoustic combo stay true to that version as this nine minute epic breezes along, the drums and bass locking down the groove with Toshiyuki Sekine’s piano drive the arrangement along. For some purists, a minor criticism would be that the ride cymbal is too prominent in the mix. That’s because of the close miking technique that had been used since the late-sixties. Having said that,  Stop Over wasn’t a big budget recording run by a professional recordist, and it would be easy for an inexperienced engineer to place the microphone to close to the ride cymbal. However it could be argued this adds to the authenticity and honesty of the recording. Meanwhile, the maestro Toshiyuki Sekine  plays with urgency, fluidity and confidence as his fingers effortlessly fly up and down the keyboard showcasing his considerable skills on this epic track.

The late, great vibes and marimba player Robert Hutcherson penned Little B’s Poem and it featured on his 1965 Blue Note album Components. It’s another beautiful, dreamy  sounding track with another virtuoso performance from Toshiyuki Sekine, while the guitar and bass play supporting roles. Later, the alto saxophone soars above the arrangement its wistful sound adding the finishing touch to one of the album’s highlights.

Stop Over closes with the title-track which was written by Hideto Sasaki.  It’s a breathtaking, blistering and explosive track that features nine magical minutes of hard bop as this group of young, talented amateur musicians shine brightly and never burn out as they close the album on a truly memorable high on this opus. Hopefully,  having closed the album in such style Hideto Sasaki, Toshiyuki Sekine Quartet + 1 all took a bow as they finished recording Stop Over.

Sadly, Stop Over was the only recording by Hideto Sasaki, Toshiyuki Sekine Quartet + 1. It features four almost flawless covers and the one original Stop Over, where the combo shine bright as they showcase their combined and considerable skills on an album of hard bop that veers between spellbinding, beautiful,  breathtaking, blistering and melancholy.

By then, hard bop was regarded by critics and most jazz fans as yesterday’s sound, but that didn’t matter to Hideto Sasaki, Toshiyuki Sekine Quartet + 1 when they were recording Stop Over. They wanted to record the music they loved and were passionate about. It wasn’t as if the album was a big budget release on a private press. Instead, it was a reminder of a group of friends studying together and making music in their spare time. When they went their separate ways after leaving Chuo University, Stop Over was a reminder of the time they spent together and the music they made. Or so they thought.

The Smile label only pressed between 50 and 100 albums, and they were given to friends of family of the band and everyone involved in the album. Despite that, Japanese jazz fans heard about Stop Over which remained tantalisingly out of reach given its rarity.

That remains the case today, and it’s almost impossible to find a copy of Stop Over which is on every J-Jazz  fan’s want list. However, unless they’re fortunate enough to come across a copy in a thrift store, junk shop or dusty warehouse Stop Over will continue to elude them. Thankfully, BBE Music  will reissue Stop Over on the ‘27th’ March 2020 and at last, a wider audience can discover the delights of one of  rarest albums of J-Jazz released during its golden era. 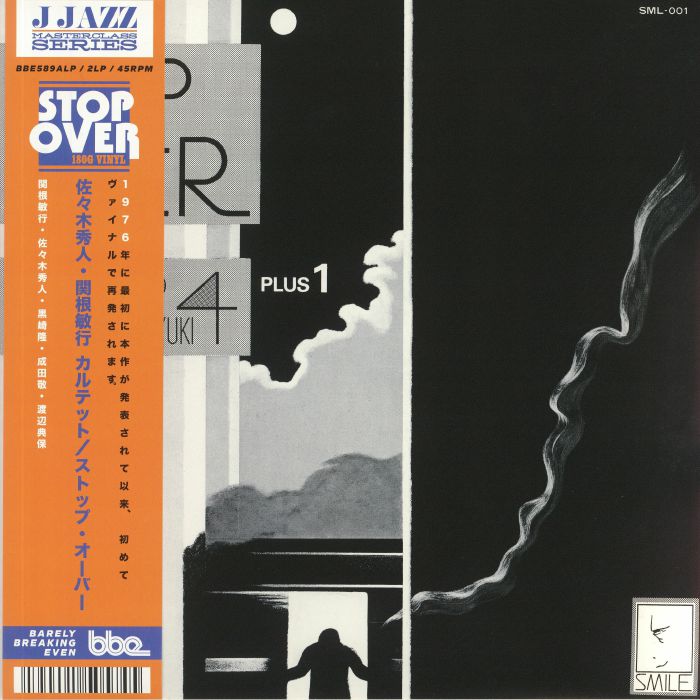