Although Australian progressive rockers Pirana were together for just over three years, they played live over 600 times and released two albums on Harvest Records. This included their 1972 debut album Pirana, which has just been reissued on vinyl by Magic Box. It’s a cult classic and a reminder of a group that should’ve reached greater heights.  Sadly, commercial success eluded Pirana, and theirs is another case of what might have been?

The Pirana story begins in Sydney, fifty years ago in mid-1970, when former members of Gus and The Nomads’ rhythm section decided to head form a new band. By then, the group had been together since the mid-sixties and  released several singles as Gus and The Nomads and also as The Nomads. Despite that, drummer Jim Yonge,  bassist Graeme Thomson and guitarist Tony Hamilton plus keyboardist, guitarist and vocalist John Millyard decided to start afresh with a new group and make a different type of music…progressive rock.

Before long, Pirana were playing live and had a nightly residency in Sydney, at the Hawaiian Eye, a club run  by promoter and manger John Harrigan. Things were looking good for Pirana. That was until  keyboardist, guitarist and vocalist John Millyard announced that he was leaving the band.

This was a huge disappointment for Pirana who had lost their lead vocalist and keyboardist. Fortunately, they were told about a tattered keyboard from New Zealand Stan White, who was worth checking out. Maybe he could fill the gap left by John Millyard?

Stan White was originally from Lake Tekapo, in the South Island, and later, moved to Christchurch, where he became a members of The Chapta. They became a successful group and during the early seventies, were signed to Festival Records and HMV. However, by then,  Stan White had moved on.

He left Christchurch and moved to Sydney where he joined the group Multiple Balloon. They were often to be found playing in a cellar bar at the bottom of William Street, Sydney.  This was where other members of Pirana saw Stan White play and quickly realised he was the perfect replacement for John Millyard.

After speaking with the members of Pirana, Stan White agreed to join group. The second lineup of the group was born, and when  Pirana’s powerhouse of a rhythm section combined with Stan White’s dazzling, mesmeric keyboard skills the newcomer played an important part in its sound and success.

So would his flare and ability to write and arrange songs. Stan White would prove to be the perfect foil  and compliment Pirana’s other songwriter, Tony Hamilton.  He had a thirst and passion for songwriting and Stan White helped bring out the best in him. The group’s new keyboardist was soon proving his worth.

Each night,  Pirana made their way to the Hawaiian Eye, in Castlereagh Street, and when they took to the stage used each set to plan for their future. They road tested new songs and honed their sound, which was a fusion of progressive rock and Latin percussion.

By then, Jim Duke Yonge had already established a reputation as progressive and innovative drummer who played with power and rhythmic invention, with bassist Graeme Thomson was steady and played with feel as he provided the musical pulse. Playing an important part in the group’s sound was Stan White’s coursing, swirling Hammond organ and his high vocal. Meanwhile Tony Hamilton’s blistering, searing, soaring guitar answered its call and when needed, he was capable of adding a  vocal powerhouse. Pirana in full flow was an impressive sound, and  it wasn’t going to be long before Pirana they came to the attention of one of the A&R scouts that were regulars in the Hawaiian Eye.

It was Michael Barclay, who had just taken over as A & R Manager for EMI who spotted Pirana playing one night in the Hawaiian Eye. The former manager of  Decca Records UK realising that Pirana were a cut above the competition signed the band to a longterm contract to the nascent Harvest label. Pirana were in good company as Michael Barclay had previously signed The Moody Blues to their new label. For Pirana, these were exciting times.

They started to work on their debut album and paid more attention to the set lists for their concerts. This in included an appearance at Wallacia, which was a one day festival to the west of Sydney.

Pirana weren’t the only new signing to Harvest records on the bill at the Wallacia Festival. They were joined by  Greg Quill and Country Radio. This would be Pirana’s last major concert before recording their debut album.

The members of Pirana thought that their appearance at Wallacia was the perfect place to road test some new songs they had written. However, this was risky, a newly signed band playing new songs in front of a large crowd. If the material wasn’t well received they would fall flat on their face. Fortunately,  Pirana and their new material went down well receiving rapturous applause. This augured well for the recording of their eponymous debut album.

By the time Pirana entered the studio, the rock magazine Go Set wrote an article praising their barnstorming performance at the Wallacia Festival. This was the perfect boost to their confidence as they started recording Pirana.

Joining Pirana at  EMI’s 301 studio in Sydney was producer Gus McNeil and engineer John Taylor. The rhythm section of  drummer Jim Yonge,  bassist Graeme Thomson and Tony Hamilton who played rhythm guitar, lead guitar, timbales and added vocals. Stan White played Hammond organ,  piano and contributed vocals during what was a relatively quick session. The band were devoted to what they were doing and innovative, like so many progressive rock band. Their eponymous debut album featured their trademark sound. This was traditional progressive rock sound combinedLatin rhythms, which critics compared to a Santana influence. This Pirana hoped would prove popular when their album was released later in 1971.

This was the sound that Pirana had been playing and had proven popular when they played live. By then, Pirana were no strangers to Sydney’s live scene,  having started out at the Hawaiian Eye before spreading their wings and unleashing a barnstorming performance at the Wallacia Festival just before recording Pirana. They hoped that the album would find an audience across Australia where progressive rock was popular.

By then, many other groups had turned their back on the traditional pop sound, and embracing progressive rock. This included Company Cain, Greg Quill and Country Radio, Spectrum, Mackenzie Theory, Taman Shud, The Aztecs and The La De Da’s. Just like Pirana, these groups featured talented, inventive and versatile musicians brought a new level of creativity to the studio was they showcased a new sound with the music they made. It was ambitious, innovative and progressive and would stand the test of time. Sadly, not all of the albums released by these groups found the audience they deserved.

That includes Pirana’s eponymous debut album which was released in 1971. Sadly, although the album was well received by critics who were won over by Pirana’s ambitious and innovative fusion of progressive rock, Latin percussion with a hint of pop, psych and country rock. From the opening bars Pirana was a compelling and captivating album.

Elation opens the album and is designed to grab the listener’s attention. It doesn’t disappoint and and connoisseurs of progressive rock the lengthy drum and percussion solo will prove a veritable musical feast. One of the highlights of the album Sermonette which features some stunning interplay between Tony Hamilton’s guitar and Stan White’s Hammond organ. The Time Is Now breezes gently along before becoming rocky and anthemic. It’s a song with a message that is still relevant today as Pirana seamlessly combine pop, blistering guitars, Latin percussion, a swirling Hammond organ with hints of psych and their trademark progressive rock to create another of the album’s highlights.

Straight away, there’s a wistful sound to Find Yourself A New Girl and nod to The Beatles and even The Move. A flute plays a leading role in this melodic and memorable song that is without doubt the most commercial on the album. Quite different is The River where Pirana drop the tempo on what’s a country rocker. It features a looser sound that may not be as polished as other tracks. The vocal is impassioned and emotive while the rest of the band showcase their versatility. Both Easy Ride and then Stand Back have much in common with Sermonette as they feature a much heavier sound with the Hammond organ and guitar playing starring roles. On Stand Back, which is a ten minute epic there’s lengths solos as this talented and versatile band close their debut album on an uber rocky high and  considerable talents.

Following the release of Pirana, the band left Sydney in late 1971 and headed to Melbourne where they hoped to introduce their music to a new and wider audience. That made sense as the city had a bigger live scene and their were more venues for Pirana to play at.

This included Berties, Sebastians, Thumping Tum and countless other  suburban pubs as well as the universities and RMIT,  which was a fantastic venue for live bands at lunchtime. Pirana played all these venues and more in the hope that their eponymous debut album would start to find the audience it deserved. It was a gruelling schedule.

The members of Pirana found themselves playing three times on a Saturday, and by the end of the week had always played seven or eight gigs. They were lucky that Michael Chugg’s Sunrise agency were always able to find work for the band in Melbourne.

The band were part of a bill that featured Deep Purple, Free and Manfred Mann and toured Australia. For Pirana that was one of the highlights of the year. Another was being on the bill at the Pink Floyd concert at Randwick Racecourse as 50,000 watched on. Despite rubbing shoulders with the great and good of rock, Pirana still wasn’t selling as 1972 dawned.

At the start of 1972 Pirana played their first Sunbury, and executes at EMI decided to record the set. They played another breathtaking set bit only their encore of Santana’s Soul Sacrifice made it onto a compilation album. That however, was the least of the group’s worries.

In February 1972, Stan White left Pirana after just under two years. He left behind two songs, I Hope You don’t Mind and Funny Games which featured on Pirana II. They were part of his legacy.

The rest was his contribution to Pirana, which was overlooked and underrated upon its release in 1971. Maybe part of the problem was it was only released in Australia, and fans of progressive rock in Britain and America never got the chance to discover Pirana’s trademark sound?

They  took as a starting point progressive rock and Latin percussion and added elements of pop, hard rock, psychedelia and even a detour via country rock. Add to the mix a sweeping, swirling Hammond organ and blistering, scorching guitar licks and the result was an ambitious, inventive and innovative album of genre-melting music from four talented and versatile and musicians.

Sadly, theirs is a case of what might have been. In 1971, they released their  eponymous debut album, Pirana, which should’ve found a much wider audience, but remained one of music’s best kept secrets for far too long and is only new receiving the critical acclaim it so richly deserves. 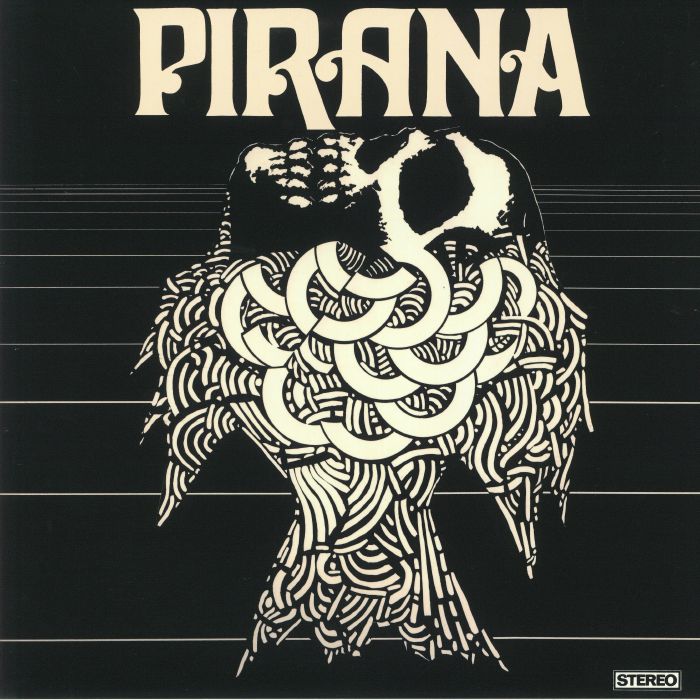