Some labels prove to be the perfect fit for an artist. This was the case when Leon Thomas signed to Bob Thiele’s Flying Dutchman Productions.

By the late sixties, Leon Thomas had embraced free jazz fully. He turned his back on the blues and his vocal style was totally transformed. His vocal encompassed Afrobeat, blues,  jazz R&B and soul as he scatted and yodeled. Leon Thomas’ vocal style was truly unique. Many people within the music industry didn’t understand what he was doing but Bob Thiele at Flying Dutchman Productions did.

During his career, Bob Thiele had worked with some of the most innovative and creative musicians in the history of jazz. He realised that often, large record companies aren’t the best environment for innovative and creative musicians. Often, these musical mavericks didn’t thrive within such an orthodox environment. Their creativity is restricted, meaning they’re unable to experiment and innovate like they’d like.

Having left Impulse following the musical equivalent of a musical coup d’tat, Bob Thiele founded Flying Dutchman Productions. His new label would be the perfect environment for musical mavericks to thrive. He signed some of the most innovative jazz musicians of the late-sixties and early seventies. Among them weer Ornette Coleman, Gil Scott Heron, Eddie “Cleanhead” Vinson, Louis Armstrong and Lonnie Liston Smith and His Cosmic Echoes. Another artist signed to Flying was Leon Thomas.

Leon Thomas released a quartet of albums between 1969 and 1973. His Flying Dutchman debut was 1969s Spirits Known And Unknown. The following year, he released his sophomore album The Leon Thomas Album in 1970. Flying Dutchman was the perfect label for Leon Thomas. It was as if having found a label that understood him, Leon Thomas was allowed to unleash his creativity. With each album, he pushed musical boundaries even further, and that was the case on his third album, 1972s Blues And The Soulful Truth. He had come a long way since he first heard Miles Davis back in St. Louis.

Leon Thomas was born in East St. Louis, Illinois, in October 1937. From an early age, his life revolved around music. His parents were avid music lovers and his hometown had a thriving musical scene. Inspired by a blues’ shouters like Big Joe Turner, was a familiar face on the local music circuit. Then when Miles Davis came to town, Leon had a musical awakening

The night Miles Davis played St. Louis, Miles’ band featured John Coltrane. That night, they embraced improvisation and pushed musical boundaries to their extremes. For Leon Thomas, this showed him what was possible musically. Here was musical that was inventive, innovative and influential. So much so, that it inspired Leon Thomas to study musical at Tennessee State University.

Having left Tennessee State University, Leon Thomas became a familiar face on the jazz circuit. Having signed to RCA in 1958, Leon recorded what should’ve been his debut album. It wasn’t released. After that, When Leon was the vocalist with Count Basie’s band in the early-sixties right through until the mid-sixties. During that time, his style is best described as traditional blues. However, his style changed when he headed to Los Angeles.

It was is Los Angeles that Leon Thomas embraced free jazz. Already an admirer of improvisation within jazz, free jazz took things further. Even better, Leon Thomas met musicians who not only shared similar musical philosophies, but political and social values. This included saxophonist Arthur Blythe, drummer Leroy Brooks and pianist Horace Tapscott. Together, they were the Underground Musicians and Artists Associations. Meeting these three musicians, resulted in Leon finding his real voice. With their help, Leon’s voice became like an instrument. He fused musical influences, with blues, jazz and Afro-beat combining with soul, as Leon Thomas’ vocal veered between a scat and yodel. This was unique, avant garde and groundbreaking. Leon Thomas was a pioneer, as he headed to New York, looking for fellow travellers.

By 1967, Leon Thomas had met saxophonist Pharoah Sanders. This was a perfect match for Leon. Here were two groundbreaking musicians. In Pharoah Sanders’ hands, the saxophone was transformed. He’d been a member of John Coltrane’s band, until his death in 1967.

For his third album, Blues And The Soulful Truth Leon wrote L-O-V-E and Love Each Other. He also arranged the traditional song C.C. Rider. Leon cowrote  Shape Your Mind To Die with Neal Creque and Let’s Go Down To Lucy’s with Alfred Ellis. Alfred and Leon cowrote China Doll with Jesse Kilpatrick. Other tracks included covers of Gabor Szabo and George David Weiss’ Gypsy Queen and John Lee Hooker’s Boom-Boom-Boom. These eight tracks became Blues And The Soulful Truth.

Let’s Go Down To Lucy’s opens Blues And The Soulful Truth. From the get-go you’re hooked. Chiming guitars, growling horns and a funky rhythm section join forces with meandering keyboard. Leon unleashes a powerful, sassy, lived-in vocal. The rhythm section provide the funky, pulsating heartbeat. Meanwhile, bursts of blazing horns punctuate the arrangement as Leon Thomas vamps his way through the lyrics. He vamps and jive-talks his way through the track combining jazz and soul with power, sass and humour.

Straight away, Gypsy Queen sees Leon return to the more familiar sound of his two previous albums. Keyboards flit across the arrangement, while the arrangement create a shuffling, spacious beat. Leon scats tenderly. Then as rasping horns enter, Leon unleashes his vocal. He sounds not unlike Terry Callier. Heartfelt and growing in power and passion describes his vocal. The arrangement grows in power. Elements of jazz, funk and soul are combined. Leon scats and yodels. This is very different from the previous tracks. Especially when he unleashes a free jazz powerhouse. Gypsy Queen is transformed. It becomes something very different to the song Santana popularised on Abraxas. In Leon’s hands, he reinvents the song, transforming it into something that writers Gabor Szabo and George David Weiss never envisaged.

Shape Your Mind To Die has an Eastern sound. That comes courtesy of the horns. They’re joined by percussion and the rhythm section. Just like the previous track the bass line is at the heart of the arrangement. Leon Thomas’ vocal is deliberate and dramatic. The lyrics are cerebral and full of social comment. Midway through the track, he unleashes a haunting laugh. That’s the signal for the band to stretch their legs. They don’t need to be asked twice, combining everything from funk, jazz, psychedelia and rock. When Leon Thomas returns, his vocal breathes life and meaning into the lyrics on a tracks which is spiritual jazz at its finest.

Most people will know John Lee Hooker’s Boom-Boom-Boom. It’s a familiar blue track. However, Leon Thomas transforms the track. In his hands, the song swings. Driven along by the piano rhythm section and crystalline, rocky guitar he combines jazz, blues and rock. A scratchy fiddle and Hammond organ are added. By now, a tired old blues track has been transformed. Leon Thomas grabs the song and makes it swing.

China Doll marks another change of direction from Leon Thomas. Flourishes of piano join percussion, cymbals and finger clicks. He adds a scatted vocal and gradually, the arrangement shows its hidden secrets. A wistful piano, meandering bass and myriad of percussion combine. They create the backdrop to Leon’s needy, sassy vocal. Harmonies coo while the piano meanders and percussion is sprinkled across the understated arrangement. When all this is combined, the result is a track that’s soulful, sassy and jazz-tinged. It also showcases Leon Thomas’ versatility and talent as a storyteller who can bring lyrics to life.

The familiar sound of C.C. Rider closes Blues and The Soulful Truth. Growling horns, jazzy piano and the rhythm section combine blues, funk and jazz. They’re joined by a glistening guitar and scratchy fiddle. Together, they set the scene for Leon’s heartbroken vocal. He mixes power, frustration and despair. Then when his vocal drops out, his band take centre-stage. They enjoy the opportunity to kick loose. A glorious rocky guitar solo steals the show. Then an atmospheric Hammond organ picks up the baton. It unleashes flourishes of jazzy-tinged, funky and dramatic music. Stabs of piano, rocky guitar and scratchy fiddle compete for your attention. Leon Thomas seems content to let his all-star band to grandstand. However, with a minute to go, he returns delivering a heartbroken, dramatic and impassioned vocal powerhouse. This proves a fitting finale to Blues and The Soulful Truth.

Blues and The Soulful Truth was Leon Thomas’ third album for Flying Dutchman Productions. His two previous albums hadn’t sold well. So, something had to change. What changed was Leon’s musical direction. Gone was Leon’s unique and inimitable free jazz style.

No record label can continue to release albums that don’t sell. That would be folly and a recipe for insolvency. It was why Leon Thomas recorded his most accessible and mainstream album, Blues and The Soulful Truth. It was a revelation and Blues and The Soulful Truth should’ve been a huge commercial success. It showcased a versatile and multi-talented vocalist. He could sing blues, jazz, R&B, rock or soul. Leon Thomas’ band were equally versatile as they strut their way through eight tracks  flitting between, and sometimes, fusing blues, free jazz, funk, jazz, psychedelia, R&B, rock and soul. Not once do they miss a beat. Mind you, what do you expect from what was a band comprising some of America’s top musicians? Sadly, despite their best efforts, Blues and The Soulful Truth wasn’t a commercial success.

Leon Thomas it seemed, wasn’t going to enjoy the commercial success his music deserved. He’d even changed direction, releasing the most accessible and mainstream album of his career, Blues and The Soulful Truth which  is the album that should’ve transformed Leon Thomas’ career and fortunes. Sadly, that wasn’t to be and Blues and The Soulful Truth proved to a lost classic.

That wasn’t the end of Blues and The Soulful Truth. No. For too long, his music was largely forgotten. As time went by, a new generation of music lovers discovered Leon Thomas’ music. They realised that Leon Thomas was one of music’s best kept secrets. Here was an artist whose groundbreaking, genre-melting albums should’ve enjoyed commercial success and critical acclaim aplenty. Sadly, as many artists have discovered talent alone doesn’t result in commercial success. If it did, then Leon Thomas would’ve been one of the most successful jazz singers of the early seventies. Sadly, that wasn’t the case. However, Leon Thomas will always be remembered as one of  jazz music’s true pioneers. 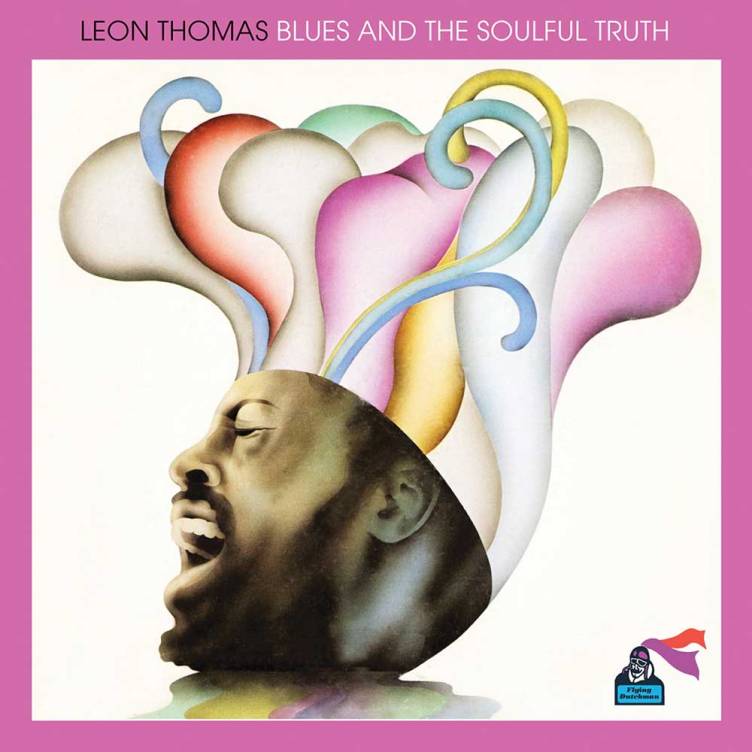