In 1964, twenty-six year old hard bop trumpeter Lee Morgan’s career was transformed when he enjoyed a crossover hit with The Sidewinder. Instantly recognisable and incredibly catchy, it became a jazz standard and nowadays, is regarded as Lee Morgan’s best known composition.

Buoyed by the success of the single, Blue Note Records released The Sidewinder album in July 1964. It became the label’s biggest selling album and  reached number twenty-five in the US Billboard 200.  In doing so, it transformed the career of the prodigiously talented Lee Morgan.

It should’ve been a time for celebration for the trumpeter who had just celebrated his twenty-sixth birthday, and  had broken sales records at Blue Note Records. However, Lee Morgan wasn’t happy. He had discovered that Chrysler was using The Sidewinder as background music on a  commercial that was being shown during the Word Series. There was a problem thpugh. The car giant hadn’t asked his permission, and it was only  after he threatened to sue the company that they agreed not to show the advert again. It was a moral victory for Lee Morgan.

Little did  he know that he had just enjoyed the biggest single and the most successful album of his career. Buoyed by the success of The Sidewinder, Lee Morgan and many other artists were encouraged to try to replicate the track’s boogaloo sound. They were essentially trying find a formula for a hit single, and took this further firstly with Lee Morgan’s  future albums.

Given The Sidewinder was the  most successful album Blue Note Records had ever released, executives at the label wanted Lee Morgan to follow a similar formula for future albums. They decided that his future albums would open with a lengthy, funky blues and he would follow this with a number of hard bop compositions. This became the formula for other artists.

While labels like Motown were known to record and release formulaic music, this was a first for artists signed to Blue Note Records.

By then, Lee Morgan had already recorded his Tom Cat album at Van Gelder Studio, on August the ‘11th’ 1964. However, Alfred Lion shelved both  Tom Cat and Search For The New Land which was recorded on February the ‘15th’ 1964. Alfred Lion wanted to build on the success of The Sidewinder and encouraged Lee Morgan to Morgan to record a new funky theme,  which was dubbed as: “the Sidewinder lineage.” The resulted was The Rumproller the title-track from the album that Alfred Lion hoped would replicate the success of The Sidewinder.

With Blue Note Records wanting Lee Morgan to come up with another hit single, he began writing material for his new album which eventually became The Rumproller. However, he wrote  just two of the five tracks, Desert Moonlight and Eclipso. The other compositions were Andrew Hill’s The Rumproller, Wayne Shorter’s Edda and Rudy Stevenson’s The Lady. Just like The Sidewinder and previous albums, it was recorded at a familiar studio.

This was the Van Gelder Studio, at 445 Sylvan Avenue, Englewood Cliffs, New Jersey. The first of two sessions took place on the ‘9th’ of April 1965. Joining trumpeter Lee Morgan were drummer Billy Higgins, bassist Victor Sproles, pianist Ronnie Mathews and tenor saxophonist Joe Henderson. While Alfred Lion produced the session he was ably assisted by recording engineer Rudy Van Gelder. They had worked together for many years, and many albums were recorded in a day. However, that wasn’t the case with The Rumproller.

Twelve days later, on the ‘21st’ of April 1965, the same personnel reconvened at the Van Gelder Studio to complete the album. This they managed to do and Alfred Lion had the album he hoped would replicate the success of The Sidewinder.

Sadly, that wasn’t the case. When The Rumproller was released as a single in 1966 it wasn’t a commercial success and failed to chart. This didn’t augur well for the release of the album.

The Rumproller was well received by many critics, but it wasn’t hailed as a classic like The Sidewinder. It was a career defining album and the most successful album of Lee Morgan’s career. This was a lot to live up to, and when The Rumproller was released in mid-January 1966 it wasn’t the commercial success that Lee Morgan, his band and Alfred Lion had hoped. It was the album that got away for Lee Morgan.

Now fifty-four years after the release of The Rumproller, it has recently been reissued by  Blue Note Records as part of the label’s eightieth anniversary celebrations. It’s a welcome reminder of the much-missed and prodigiously talented trumpeter.

Opening The Rumproller is the title-track, which Alfred Lion hoped would replicated the commercial success of his boogaloo hit The Sidewinder. It doesn’t take long to realise  that The Rumproller has been inspired by The Sidewinder.  The two tracks have much in common and are from the same lineage.  Lee Morgan’s trumpet and Ronnie Mathews’ piano play starring roles, and later, so does tenor saxophonist Joe Henderson. He blows hard, playing with power and passion before Ronnie Mathews’ piano takes centrestage before the band are reunited as this ten minute epic draws to a close. It’s one of the highlights of the album and an oft-overlooked track.

Straight away, Desert Moonlight has a cinematic sound and transports the listener to a faraway land. Meanwhile, Lee Morgan and his band create a joyous sounding track. Horns are to the fore as the rhythm section ensure the track swings and Ronnie Mathews’ fingers dance across the keyboard. Later, Lee Morgan plays his trumpet with speed, power and accuracy before being replaced by Joe Henderson’s braying, growling and rasping tenor saxophone. He’s accompanied by Ronnie Matthews who plays  a flawless solo, his fingers flying across the keyboard before the horns unite and the band play as one. They showcase their considerable skills during a quite beautiful, memorable and melodic musical journey

Initially, the introduction to Eclipso is understated before Lee Morgan leads his quintet from the front. Bursts and stabs of horns blaze and rasp as the Ronnie Matthews stabs and jabs at his piano and the rhythm section provide the heartbeat. Soon, drummer  Billy Higgins adds a degree of drama and Victor Sproles firmly and confidently  plucks his bass. Still the horns play a starring role. They’re played with speed, power and control as Ronnie Matthews jabs, stabs and pounds his piano before it’s all change and he plays a subtle and melodic solo. He’s accompanied by Billy Higgins who powers his way around the kit playing with a swagger as the horns unite before the track reaches a memorable crescendo.

Ronnie Matthews’ piano leads the way on Edda before the rest of the quintet enter. The horns play a starring role soaring above the arrangement quivering, shivering, rasping and braying as the rhythm section propel the joyous  arrangement which almost dances along. By then, the quintet is in full flight and Lee Morgan is unleashing one of his finest solos. It’s flawless as he plays with speed, fluidity and an enviable inventiveness. He seems to lift the rest of the quintet to new heights on what’s without doubt another of the album’s highlights.

Closing The Rumproller is The Lady, a ruminative sounding track that invites reflection. It sounds like a track about love, love lost and The Lady who got away. Maybe she was the one as well? One can imagine Lee Morgan and his band in a smokey jazz club, late at night playing The Lady as those who have loved and lost think about what might have been and how different their lives could’ve been?

The title-track gave Lee Morgan his biggest hit single of his career, and The Sidewinder was his most successful album. It was also the biggest selling album in Blue Note Records’ history.  That was why Alfred Lion wanted Lee Morgan attempted to replicate the single’s boogaloo sound and use The Sidewinder as a formula for future albums.

Lee Morgan was placed in an impossible position after the success of The Sidewinder. Producer and Blue Note Records cofounder Alfred Lion had shelved two albums, Search For The New Land and Tom Cat, so that Lee Morgan could record and release Rumproller. It was a huge risk and one that sadly, backfired.

When The Rumproller was released as a single, stylistically it had much in common with The Sidewinder. However, it wasn’t a commercial success when released as a single and neither was the album. Maybe the problem was that Lee Morgan’s fans were looking for something new from him? Instead, they received an album that in many ways had been heavily inspired by The Sidewinder.

Despite that, The Rumproller is one of the oft-overlooked hidden  gems in Lee Morgan’s discography. It’s recently been reissued by Blue Note Records and this is the perfect opportunity to revisit an underrated album where the boogaloo of The Rumproller rubs shoulders with hard bop and the beautiful ballad The Lady.

Sadly, The Rumproller failed to build upon the success of Lee Morgan’s career defining classic The Sidewinder. While he enjoyed further success with the title-track from his 1967 Cornbread album and Yes I Can, No You Can’t from 1968s The Gigolo, The Rumproller was a case of what might have been and was the one that got away for the prodigiously talented trumpeter Lee Morgan. 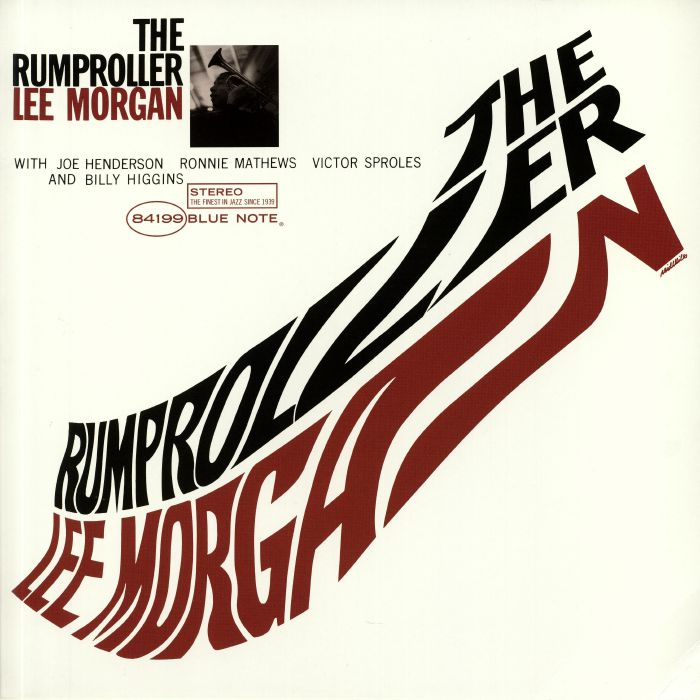