Joe Houston’s career began in 1941 when he was just fifteen, and a saxophonist in a touring band never turned up. This presented the bandleader with a problem. However, he needn’t have worried as Joe Houston was in the audience and this was the breakthrough the young saxophonist had dreamy about.

From an early age, Joe Houston was determined to make a career out of music. So much so, that he bought a red suit with white trousers which  was what many of the touring bands wore. One night, when the saxophonist didn’t show, Joe Houston who looked the part, offered his services. He grabbed his saxophone, and took to the stage and that night, his career began in earnest. By them, he had come a long way in a  short time.

Joe Houston was born on 11th July 1926, in Austin, Texas and it was in school, that Joe discovered music. Originally, he played the trumpet but before long he switched to the saxophone. Soon, he was an accomplished saxophonist and good enough to play in a touring band by the time he was fifteen. That was just the start of his career.

By 1943, Joe Houston had joined a touring band and spent three years touring Kansas, Chicago and the mid-west. These three years were an important part of his musical education and by the end of the Second World War, Joe Houston was ready to rub shoulders with some of the biggest names in music.

Among the musicians Joe Houston worked with, were pianist Amos Milburn and vocalist Big Joe Turner. He was impressed by the young saxophonist that he asked Joe to put a new band together for him. In return, Big Joe Turner recommended Joe Houston to Freedom Records.

When Joe Houston signed to  Freedom Records in 1949, he was only twenty-three. However, he had been a professional musician eight years. He had  played with some big names, and learnt from each of them. This included learning what it took to be a bandleader.

In 1951, he formed the Joe Houston and Orchestra and their first release was Blowin’ Crazy, which was released on Macy’s Recordings. He hoped to build on the success of previous “blowing’” saxophone releases and Blow Joe Blow gave him a regional hit in the South. This lead to the Bihari brothers buying the track which they planned to release nationwide.

The Bihari brothers were well known within the music industry and owned several labels, including Los Angeles’ based Modern Records. Just like Big Joe Turner, the Biharis were impressed by Joe Houston. They made the journey to Houston to record several sides they planned to release.

Before that, they released Blow Joe Blow. While it wasn’t a nationwide hit, it showed the Biharis that Joe Houston had a big future ahead of him. Their paths would cross again.

After meeting the Biharis, Joe realised that L.A. was jazz central. So he decided to relocate to tinseltown. This worked in Joe’s favour. He played on numerous sessions, and released singles on various labels, including Mercury, Combo, Modern and its subsidiary RPM. This somewhat scattergun approach paid off.

Another two years passed and Joe Houston enjoyed a hit with All Night Long. It was released on John Dolphin’s Money Records in 1954. Soon, All Night Long was regarded as a South Californian classic. Joe Houston was back, and back with a hit.

Over the next couple of years, Joe Houston kept making records and working as a sideman. Then in 1956, Joe Bihari entered Joe’s life when he bought All Night Long and made it the lead track from his album Blows All Night Long. This was the first of seven albums Joe Houston released on the Biharis labels.

The other five were released on their Crown imprint. This included four albums in 1962 Rockin’ And Rollin,’ Doin’ The Twist, Twisting In Orbit and Wild Man Of The Tenor Sax. Then in 1963, Joe Houston jumped on another bandwagon, and released Surf Rockin.’ He followed this up with Limbo. It was his last album for another fifteen years.

Over a recording career that started in 1951, Joe Houston had watched musical genres and trends come and go. He had been there through when the twist and then surf music was popular. By 1978, another musical genre was at the peak of its popularity, disco. So with the help of his old friends the Bihari brothers, Joe Houston decided to release an album that just happened to include a couple of disco tracks.

By then, the Biharis were keen to release new albums. For some time, they had been running reissue label and while this was profitable they needed a change and decided to launch their new label, Big Town.

Having decided to setup a new label, Jules Bihari started to look for artists and decided to give Joe Houston a call. They knew each other well and had first worked together twenty-six years previously.

The only problem was that Joe Houston hadn’t released an album since 1963. However, he had never stopped working during that period. He knew that his profile wasn’t as high as it once was, and that music had changed since he last released an album, but he was a versatile musician and jumped at the opportunity to make a comeback.

For his long awaited comeback album, Joe Houston and Jules Bihari penned eight tracks. Jules used the alias Jules Taub. This wasn’t fooling anyone especially the musicians who played on Kickin’ Back. They realised that Jules Taub was Jules Bihari.

Joe Houston decided to produce his comeback album and put together a tight, talented band for the recording of Kickin’ Back. The rhythm section featured drummer Ross Solomone, bassist Ted Butler and Larry Johnson on bass and guitar. Bo Rhambo played alto and tenor saxophone, while Freddy Clark and Joe Houston both played baritone and tenor saxophone on Kickin’ Back. It was scheduled for release in 1978.

There was no fanfare when Kickin’ Back was released in 1978, and Jules Bihari didn’t go out of his way to promote Joe Houston’s long-awaited comeback album. When it was released the album passed most record buyers by. Adding insult to injury, Kickin’ Back was soon deleted by the Big Town label.

For Joe Houston his fusion of blues, funk and disco had neither proved profitable nor raised his profile and he returned to playing live in LA’s clubs. Kickin’ Back was a case of what might have been for the veteran saxophonist. If only the album had been promoted properly a wider audience might have discovered an eclectic album.

Hawaiian Disco opens Kickin’ Back and straight away, there’s an obvious early sixties hot rodding sound. It’s as if Joe Houston has been inspired by his 1963 album Surf Rockin.’ That’s no bad thing. It all starts with the drums, then the guitars and blazing saxophone join in. Soon, they’re in full flight and it’s an impressive sound and for five minutes, Joe Houston and his tight, talented band create a joyous and irresistible sounding dance track.

Not many artists would’ve have thought of fusing blues and disco. Joe Houston did, and the result was T Bone Disco. Surf guitars are joined by the rhythm section and then a growling, scorching saxophone. It soars above the arrangement as the drums and piano play leading roles. By then, musical genres are melting into one. Blues, disco, R&B and surf are combined by a band of hot shot musicians. Each and every one of them have earned their stripes, and unleash peerless performances.

The tempo drops on Mr. Big, which sounds as if it belongs on an early seventies Blaxploitation soundtrack. Just a loose, spacious rhythm section and chiming guitar provide the backdrop to what can only be described as a saxophone masterclass. Joe Houston never misses as a note, as his scorching, rasping solo steals the show. Everyone else plays a supporting role as the veteran saxophonist takes centre-stage.

Baby What You Want Me To Do sees Joe Houston return to the blues. The rhythm section and crystalline guitar set the scene for his needy, lived-in vocal. Then when his vocal drops out, guitarist Larry Johnson steps up and unleashes a glistening, shimmering solo, before replying to Joe’s vocal. He pleads and vamps his way through the lyrics, constantly asking: “Baby What You Want Me To Do.”

Trippin’ In sees another change of style. The tempo stays the same as the band create a chugging beat. This allows Bo Rhambo’s alto saxophone to take centre-stage as he adds a jazzy hue to the fusion of blues and R&B behind him.

Why Don’t You Rock Me bursts into life and the chugging beat makes a reappearance. Meanwhile, stabs of piano and a chiming guitar accompany Joe’s blistering saxophone solo. He doesn’t hold back and used the track to showcase his considerable skills. In doing so, he once again steals the show.

Kicking Back-Part One sees Joe and his band at their funkiest. That’s the case from the get-go when  drums are joined by hissing hi-hats, wah-wah guitar and funky bass. The band kick loose, and produce one of their best performances. Adding the final touch is a scorching saxophone solo. It’s part ofwhat’s an inspired performance on a track that would later find favour with deep funk DJs.

Closing Kickin’ Back, is Kicking Back-Part Two. It picks up where Part One left off, and is a variation of a theme. That’s no bad thing as Joe Houston and his band are at their best, with a track that was right on trend, and even today, finds its way into many a DJs record box.

Fifteen years after releasing his last album, Joe Houston made a welcome return. Jules Bihari gave him the opportunity to rejuvenate his career and Joe Houston didn’t let him down.

Seamlessly, Joe Houston and his tight, talented band switch between blues, disco, funk, jazz, R&B and surf throughout Kicking Back. Sometimes, they fuse several genres on the same track and it all seems effortless. That’s what Joe Houston and his band were capable of. They were also capable of making music that in 1978, was bang on trend.

That’s why Kickin’ Back could’ve and should’ve been a successful album, and maybe even featured a hit single? Sadly, that wasn’t to be because Jules Bihari decided not to promote Kickin’ Back. That was the same with his new label’s Big Town’s other releases. They sunk without trace, and were soon deleted.

For Joe Houston it must have been a disappointing experience. He must have felt he had been let down badly by a man who was supposedly one of his friends. After all, why release an album and not promote it? Thankfully, this  didn’t put Joe Houston off releasing another album.

He made a comeback in 1981, when he released Earthquake on Imperial. After that, Joe Houston continued to record and play live right until 2005.

Sadly, Joe Houston suffered a stroke in 2005, and wasn’t able to played live again. He lived in Los Angeles until he passed away after suffering from a stroke on December the ‘28th’ 2015. However,  Joe Houston left behind a rich musical legacy including his cult classic  Kickin’ Back showcases his considerable talent and versatility. 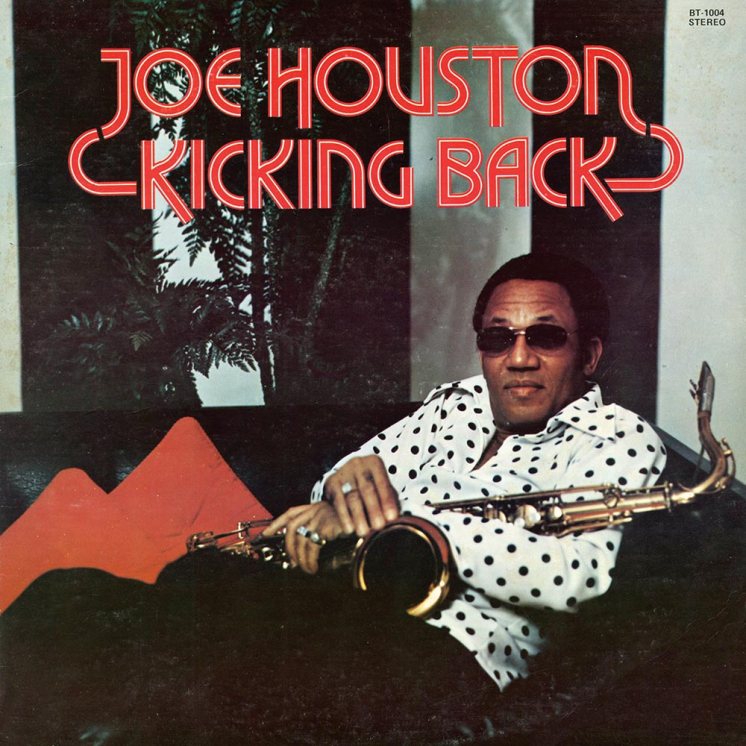