In the late-sixties and seventies Thom Bell was one of the architects of Philly Soul, and worked with everyone from The Delfonics, The Stylistics and The Spinners to M.F.S.B., The O’Jays, Three Degrees and New York City. Artists came from far and wide to work with the prodigiously talented arranger, producer, songwriter and musician including Dusty Springfield and Elton John.

Sometimes, artists whose career had stalled travelled to Philly to work with Thom Bell in the hope that he could reinvent them or transform their ailing fortunes. That was the case with Johnny Mathis and The Spinners who were one of Thom Bell’s biggest success stories. He produced seven albums in eight years for The Spinners during the seventies, and five of these were certified gold. Thom Bell was the man with Midas touch.

He wrote, arranged and produced some of the finest and most memorable examples of Philly Soul. These are timeless tracks which showcase his trademark sound which includes a French horn, lush strings. Other times he would deploy what were unusual instruments for a soul song including a harpsichord or sitar. However, Thom Bell was an innovator who imagination knew no bounds.

Proof of that is a new compilation that has just been released by Kent Soul, Ready Or Not-Thom Bell’s Philly Soul Arrangements & Productions 1965-1978. It’s the latest instalment in their Producer Series and sees the seventy-seven rubbing shoulders with great and good of music. This is fitting as Thom Bell has dedicated his life to music.

Thom Bell was born in Jamaica on January the ’26th’ 1943, and his family moved to Philadelphia when he was a child. He grew up in a middle class household, and unlike many of his friends there was no radio he could listen to R&B on. There was no time for that.

Just like his siblings, Thom Bell was classically trained musician. By the time he was nine, he could play piano, drums and flugelhorn. He remembers: “From when I was five ’til I was 17, I studied two or three hours a day.” This would eventually pay off and he would enjoy a successful musical career.

Before that, Thom Bell heard one of the songs that would influence him: “First thing I heard on the radio was Little Anthony & the Imperials’ ‘Tears On My Pillow’. I thought, What kind of music is this? This is nice music!”

Thom Bell became the singer in a new duo. His partner was none other than Kenny Gamble. He would later form a successful partnership with Leon Huff. That was all in the future, and

A year later the duo expanded to a five-piece, Kenny Gamble and The Romeos, and started to pick up work as session musicians at Philadelphia’s hot Cameo and Parkway labels. This allowed Thom Bell to hone his skills that he would put to good use in the not so distant future.

When Thom Bell left Kenny Gamble and The Romeos, he was replaced by Leon Huff, the third member of The Mighty Three. However, he continued to work at Cameo-Parkway and just like Gamble and Huff, was given the freedom when he recorded singles for Eddie Holman, The Orlons, Dee Dee Sharp and The Delfonics. However, Thom Bell’s time at Cameo-Parkway came to an end in 1967 when the label folded. It was the end of an era.

Of all the artists and groups signed to Cameo-Parkway, Thom Bell saw potential in The Delfonics who he took to Philly Groove Records. He worked on the four albums the group released on the label. The Delfonics also feature on Ready Or Not-Thom Bell’s Philly Soul Arrangements & Productions 1965-1978.

It documents Thom Bell’s work with The Delfonics, The Stylistics and The Spinners, and some of the artists he worked with at Gamble and Huff’s Philadelphia International Records. This included M.F.S.B., The O’Jays and Teddy Pendergrass. By then, Thom Bell had formed The Mighty Three publishing company with Gamble and Huff, and the trio were the architects of the Philly Soul.

Opening Ready Or Not-Thom Bell’s Philly Soul Arrangements & Productions 1965-1978 is Here I Go Again by Archie Bell and The Drells. It’s taken from their album There’s Gonna Be A Showdown, which was released on Atlantic, in 1969. It was written and produced by Gamble and Huff, with Bobby Martin and Thom Bell arranging the track. It benefits form one of Thom Bell’s trademark lush arrangements, and became a favourite of dancers on the UK Northern Soul scene. This resulted in the song being released as a single and reaching number twelve in the UK.

In 1967, The Delfonics released You’ve Been Untrue as a single on Philly Groove Records. It was written by William Hart and Thom Bell who arranged and the produced a single. His arrangement was way ahead of its time and featured strings, a harpsichord, timpani and Fender Rhodes. This came courtesy of the musicians who later became M.F.S.B. They prove the perfect backdrop to William Hart’s hurt-filled and soul-baring vocal.

The Mighty Three worked on two Lesley Gore singles, including Take Good Care (Of My Heart). It was released on Mercury in 1968.  On the B-Side was Look The Other Way, which was written be Mikki Farrow and Thom Bell who arranged the track. Gamble and Huff took charge of production on this hidden gem which features an impassioned and emotive vocal from Lesley Gore.

On October the ’22nd’ 1968, The Delfonics released Ready Or Not Here I Come (Can’t Hide From Love) as a single. It’s another song written by William Hart and Thom Bell composition. Thom Bell also arranged, conducted and co-produced the single which reached thirty-five in the US Billboard 100 and fourteen on the US R&B charts. This heartfelt and joyous paean featured  on The Delfonics’ sophomore album Sound Of Sexy Soul in 1969, and is the highlights of the album. That’s in part down to Thom Bell’s sophisticated arrangement and production skills.

When Kenneth Gamble was working with Dusty Springfield he needed a song for a single that was to be released before the album A Brand New Me. Thom Bell had just started working with Linda Creed and they penned I Wanna Be A Free Girl with Gamble and Huff. It was released on Atlantic Records in 1970 and featured one of Thom Bell’s trademark arrangements. This was the perfect backdrop for Dusty Springfield melancholy vocal as she hopes and longs to be free.

Thom Bell and Linda Creed had already written three hit singles for The Stylistics when they wrote People Make The World Go Round. It was arranged, conducted and produced by Thom Bell and released as a single on Avco in 1971. Three hits became four when it reached twenty-five in the US Billboard 200 and six in the US R&B charts. Forty-nine years later it’s a Philly Soul classic and one of The Stylistics’ finest singles.

During the seventies, The O’Jays were one of Philadelphia International Records’ most successful groups. They signed to the label in 1972, and by then, were a trio. Later that year, The O’Jays released the album Backstabbers which was certified gold. So was the title-track when it was released as a single. It was arranged by Thom Bell and features a stunning string chart that plays an important part in the sound and success of this Philly Soul classic.

In 1973, New York released their debut album I’m Doin’ Fine. The title-track was which was written by Sherman Marshall and Thom Bell who produced the track. It reached seventeen on the US Billboard 100 and fourteen on the US R&B charts. This should’ve been a reason to celebrate. However, many people though it was a Spinners’ single which annoyed the group. So did people saying that: “It’s the Thom Bell sound.” That’s definitely the case on what’s one a vastly underrated song that could only have been arranged and produced by one man Thom Bell.

When M.F.S.B. released their eponymous debut album in 1973, it featured Something For Nothing. When TSOP (The Sound Of Philadelphia) was released as a single, Something For Nothing featured on the B-Side. It was billed as MFSB featuring Thom Bell. He was one of the bands keyboardists and he also arranged  this lushly orchestrated hidden gem.

When Could It Be I’m Falling In Love was released by The Spinners on Atlantic in 1972. The song was written by Melvin and Mervin Steals, who were credited as Mystro and Lyric on the single. It reached number four in the US Billboard 100 and topped the US R&B charts. This Philly Soul classic was arranged, conducted and produced by Thom Bell and featured on the group’s third album Spinners. It was the first of seven album Thom Bell would produced for The Spinners in eight years.

You Make Me Feel Brand New originally featured on The Stylistics’ 1973 album Rockin’ Roll Baby. This was a longer version than the single version and was arranged, conducted and produced by Thom Bell who wrote the song with Linda Creed. The album was certified silver in the UK, and You Make Me Feel Brand New a beautiful ballad and a reminder of The Stylistics at the peak of their powers.

Teddy Pendergrass released Close The Door as a single on Philadelphia International Records in 1978. It was taken from his sophomore album Life Is A Song Worth Singing. Thom Bell arranged the single, and this bedroom ballad reached number twenty-five in the US Billboard 100 and topped the US R&B charts.

Closing Ready Or Not-Thom Bell’s Philly Soul Arrangements & Productions 1965-1978 is Track Of The Cat by Dionne Warwick It was the title-track to her 1975 Warner Bros album and was arranged, conducted and produced by Thom Bell who wrote the song with Linda Creed. Sadly, the album stalled at 137 in the US Billboard 200 but reached fifteen in the US R&B charts. Track Of The Cat is one of hidden gems in Dionne Warwick’s back-catalogue.

Ready Or Not-Thom Bell’s Philly Soul Arrangements & Productions 1965-1978 which is the latest instalment in Kent Soul’s Producer Series features twenty-three songs from familiar faces, old friends and new names. There’s Philly Soul classics, album tracks and B-Sides on the compilation which is a reminder of Thom Bell’s skills as an arranger, conductor, musician, producer and songwriter.

Many of the songs he wrote with his songwriting partner Linda Creed. They wrote countless Philly Soul classics that have stood the test of time, and sound as good as the day they were released.

That is the case with the twenty-three tracks on Ready Or Not-Thom Bell’s Philly Soul Arrangements & Productions 1965-1978. They’ve got a timeless sound and showcase the considerable talents of one of the architects of Philly Soul, who for far too long has lived in the shadow of Gamble and Huff. It’s time for Thom Bell to emerge from their shadows and take a bow, having arranged, produced and written some of the finest Philly Soul ever released. 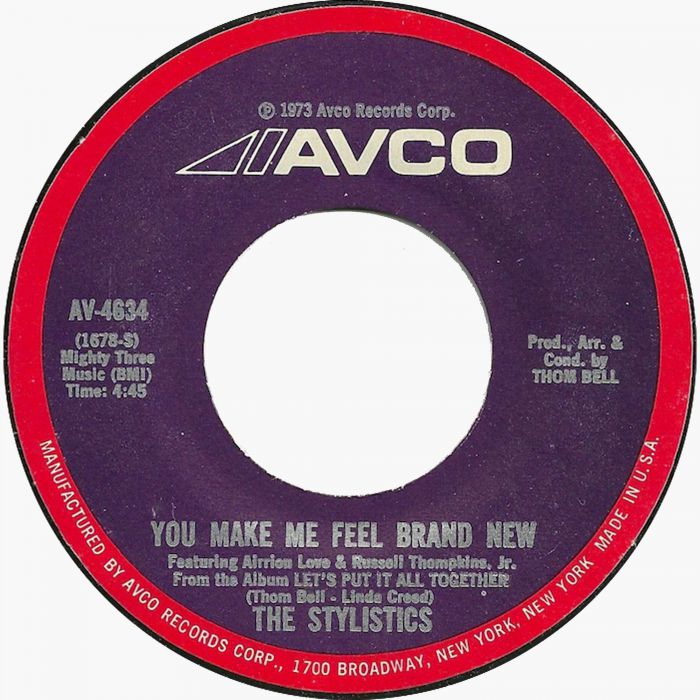