Pyramid Records was founded by Canadian artist Robin Page in Cologne and his nascent label released its first album in 1972. Over the next four years, the label established a reputation for releasing ambitious and innovative albums. However, only 50-100 copies of these albums were pressed and were either given away to Robin Page’s friends or sold in some of Cologne’s art galleries. Nobody who bought or was given one of these albums thought that one day, they would be extremely valuable.

However, not every album that was recorded by Pyramid Records was released. This includes Cozmic Corridors’ eponymous debut album.

Robin Page was a forty year old artist in 1972, and leading light in the Fluxus movement. He had moved from from England to Cologne, in Germany in 1969.  However, it turned out that he wasn’t the only expat in the city.

By then, Robin Page was a successful and established artist. He was a leading light of the Fluxus movement, and was regarded as a groundbreaking artist. He used humour within his work which sought to challenge what was regarded as good taste within the art establishment. Before long, Robin Page’s painting found an audience and became sought after. This had been what he had dreamt of and worked towards since ‘leaving’ art college in Vancouver. His new found success and financial security allowed Robin Page to work towards fulfilling another of his dreams, making music.

Robin Page was serious about making music, and had a studio in  the basement to what looked like to anyone passing by, a derelict building. Deep within its bowels, was Robin Page’s studio, and where Pyramid Records first album was recorded. It was then pressed by a Turkish entrepreneur who just happened to keep his cutting lathe within the same building. Although it was more used to producing bootlegs, it was able to cut what became PYR 001, Pyramid Records’ first release. It came wrapped in a cover designed by a local student. History had just been made.

One person presented with a copy of PYR 001, was Toby Robinson who by 1972, had become friends with Robin Page. He was persuaded to provide the material for PYR 002. Essentially, this comprised a recording of sounds bounced from one tape recorder to another. Again, a master was cut, and between 50-100 copies were either given away to Robin Page’s friends or sold in Cologne’s art galleries and clubs. No copies of  PYR 001 nor PYR 002 seem to have survived. It’s a similar story with the label’s next two releases.

Neither the master tapes nor copies of PYR 003 and PYR 004 seem to have survived the passage of time. Instead, the first Pyramid Records release to survive is believed to be PYR 005. It’s one of just eleven Pyramid Records’ recordings that remain. These recordings were made between 1974 and 1976. That was all in the future.

The members of the Cozmic Corridors were unlikely bedfellows. Especially Alex Meyer, who until joining the Cozmic Corridors had watched on with interest as sessions took place in Robin Page’s art studio. Alex Mayer wanted to participate in the sessions. However, he was out of luck. Nobody was in need of a keyboardist.

Despite this, Alex Meyer took to parking his van outside Robin Page’s flat. This was no ordinary van though. It was also where he slept and stored his trusty keyboards.  Eventually, his persistence paid off and he was invited to become  a member of the Cozmic Corridors.

He replaced Thomas Hildebrand as Mythos’ drummer and made his debut on their 1975 sophomore album Dreamlab. Alas, this was the only album Hans-Jürgen Pütz recorded with Mythos. Six years later, Touch’s 1981 eponymous debut album was released. It had been recorded in the early seventies, and featured Hans-Jürgen Pütz’s debut as lead vocalist and producer. In the post-Cozmic Corridors’ years, Hans-Jürgen Pütz had a higher profile than the rest of the band.

Especially  mystery man Peter Forster, who played electric guitar, twelve-string guitar and violin.  Nothing is known about his identity. He’s remained something of a mystery man. However, he certainly was a talented guitarist. This had lead to speculation that Peter Forster is a nom de plume of a member of a high profile Krautrock band. That makes sense.

In Robin Page’s art studio, Alex Meyer wrote the music while Pauline Lund added lyrics. Gradually, the tracks began to take shape during 1972. It soon became apparent that each member of the band had hidden talents.

Tony Robinson had to think laterally to capture the correct sound. On one occasion, he borrowed a portable Nagra tape recorder from WDR and took Alex Meyer to a derelict building in Cologne. It had the perfect acoustics to record some organ parts. After that, the rest of the recording sessions took place at Dierks Studo

Eventually though, the time came for the recording sessions to move to Dierks Studio. By then, it was 1973. All that remained was for some parts to be overdubbed. This included Peter Foster’s guitars, some of Pauline Lund’s vocals, Alex Meyer’s chants and a myriad of noises.  Once the overdubbing was complete, the album was ready for release.

Sadly, Cozmic Corridors wasn’t released during the lifetime of Robin Page’s Pyramid Records. The label closed its doors for the final time in 1976.

Later, Robin Page decided to emigrate to Canada and with him, he took Pyramid Records’ master tapes and the remaining albums. Almost nothing was left of Pyramid Records. It was as if the label had never existed.

That was until nearly twenty years later, when Tony Robinson approached Virgin Records with some of Pyramid Records’ master tapes. This resulted in the release of Unknown Deutschland-The Krautrock Archive Volume 1 in 1996. Later that year, two further volumes followed. This added to the mythology surrounded the label and resulted in further speculation about the Pyramid Records’ story.

Since then, the Pyramid Records’ story has been debated ad infinitum. Alas, far too many people have become bogged down by the speculation that surrounds the Pyramid Records’ story. It’s as if they’re determined to disprove that the music was recorded between 1972 and 1976. That’s a great shame, because in doing so, they loose sight of the important thing, the music, including the Cozmic Corridors’ eponymous debut album.

Opening Cozmic Corridors is Dark Path. Straight away, the darkness descends as the Cozmic Corridors lead the listener down a Dark Path, destination unknown.  The music is moody, dramatic, eerie  and otherworldly.  Swirling ghostly synths encircle a keyboard as a drum sounds ominously. Later, screeching, jarring sounds add to the cinematic sound. Despite this, the music is mesmeric, melodic and is always cinematic. It’s as if Cozmic Corridors have been asked to produced a spine-tingling soundtrack to a gothic horror film. This they succeed in doing, and then some.

As a hypnotic organ plays, it replicates the Cozmic Corridors’ slow climb To The Summit.  Meanwhile, a synth beeps and squeaks as it skips quickly across the arrangement. Soon, the tempo rises, as sci-fi synth are added. At one point, the organ sounds as if it belongs in a cathedral. It’s accompanied by a buzzing synth. Before long, the organ takes centre-stage. The music conjures up pictures of climbers slowly, carefully and deliberately criss-crossing the Mountainside breathing in the cold, crisp air en-route to The Summit. Later, the synth takes charge, and replicates their triumphant arrival at The Summit as the organ seems to replicate the sound of breathing. At last, the Cozmic Corridors’ journey is at end. They’re responsible for an atmospheric and cinematic track that features the Cozmic Corridors at their most inventive.

After reaching The Summit, the Cozmic Corridors head down the Mountainside. A distant drone sounds, before drawing nearer. It grows in volume as if sending out a warning. Soon, sci-fi synths are added and the soundscape takes on an experimental and futuristic sound. When the bubbling synths disappear, they’re replaced by a drone which gives way to ruminative, moody strings.  They’re joined by an ethereal vocal as a cymbal rinses. Sounds flit in and out, adding to the dramatic, cinematic backdrop. As the descent continues see-saw strings join effects, the elegiac vocal and shimmering cymbal. Suddenly, otherworldly and rumbling sounds can be heard. Danger seems imminent as growling, grinding, droning and futuristic sounds combine with the ethereal vocal. Eventually, the Cozmic Corridors make their way down the Mountainside. It’s been a captivating and perilous journey where elements of avant-garde, Berlin School, experimental and modern classical are combined by the Cozmic Corridors.

Straight away, contrasts abound on Niemand Versteht. A Fender Rhodes briefly plays before a mesmeric organ dominates the arrangement. It’s punctuated by effects that add a contrast. So does the addition of a searing electric guitar and Pauline Lund’s soliloquy, which is delivered in German. When it drops out, urgent, jangling guitars join with a myriad of effects and the mesmeric seesaw organ. It leads a genre-melting jam, before the vocal returns. By then, the organ veers between dark and gothic to discordant as the track takes on an experimental sound. Cozmic Corridors are pushing musical boundaries to their limits and sometimes, way beyond. In doing so, they create an ambitious, dark, and otherworldly genre-melting soundscape.

Closing Cozmic Corridors is Daruber. A drone ushers in an organ that adds a dramatic backdrop. Meanwhile, a glistening guitar combines with sounds that veer between shrill and serene. The multilayered arrangement is slow, lysergic and dreamy. That’s until Cozmic Corridors spring a surprise. Soon, the organ dominates the soundscape and is joined by dramatic harmonies. They that ebb and flow before briefly disappearing to reappear. There’s a darkness to the music. Especially as the organ prowls and dominates the arrangement. Later, though, it seems change is on the horizon during. Alas, it’s a false dawn during what’s  a dark and eerie eleven minute Magnus Opus.

Cozmic Corridors saved the best until last on their long lost cult classic. It was belatedly released in 1996 and since then, original CD copies of Cozmic Corridors have been almost impossible to find. Nowadays, if a copy comes up for sale it can easily change hands for well over $100. That is beyond the budget of most Krautrock connoisseurs who dream of finding a copy of this groundbreaking cult classic.

Back in 1972 and 1973, Cozmic Corridors combined elements of avant-garde, Berlin School, electronica, experimental, Krautrock, modern classical and rock. They also seem to have drawn inspiration from a number of artists, including Terry Riley, Kluster and the early albums of Peter Michael Hamel and Klaus Schulze. Mostly, though, the Cozmic Corridors plough their own furrow and sculpt five captivating and cinematic soundscapes that were way ahead of the musical curve.

If the album had been released in 1975, a few lucky record buyers or recipients of Robin Page’s generosity would’ve heard what was an ambitious album of groundbreaking and genre-meting  music. Cozmic Corridors may have even been picked up by one of the major German labels. Alas, Cozmic Corridors wasn’t released by Pyramid Records.

Twenty-three years after Cozmic Corridors was completed, the album was belatedly released in 1996. This should’ve been  something to celebrate.

By then, many people have become bogged down by the controversy and speculation that surrounds the Pyramid Records’ story. The controversy, debate and speculation continued with neither side willing to back down. Many seemed determined to disprove that the music was recorded between 1972 and 1976. It was as if they were determined to be proved right. Similarly, so were those who believed in the Pyramid Records’ story. Both sides were so caught up in the Pyramid Records’ mythology and so obsessed with what happened quartet a century ago that they had lost sight of the important thing..the music. 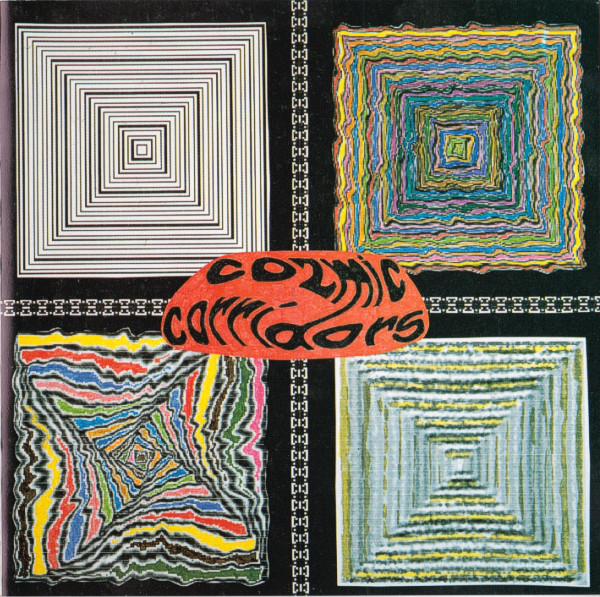