When Jimmy Smith entered Van Gelder Studio on February the ‘8th’ 1963, he was about to record his fourth album in a week. This meant that he had fulfilled the terms of his contract with Blue Note and could sign with Verve. The album he was about to record was Prayer Meetin’ which was a collaboration with tenor saxophonist Stanley Turrentine. It’s just been reissued by Blue Note Records as part of their Tone Poet series and was the third time Stanley Turrentine had played on a Jimmy Smith album.

The first time Stanley Turrentine played on a Jimmy Smith session was on April the ’25th’ 1960 at session for Blue Note Records at Van Gelder Studio. That day, he was part of a quartet that featured drummer Donald Bailey and guitarist Kenny Burrell. During the session which was engineered by Rudy Van Gelder and produced by Alfred Lion the quartet recorded enough material for two albums.

This included Midnight Special which was released to plaudits and praise in November 1961, At the time, the album was hailed as one of Jimmy Smith’s finest recordings for Blue Note Records. That’s still the case fifty-nine years later.

In April 1963, Back At The Chicken Shack was released to widespread critical acclaim. Just like Midnight Special, critics called at another of Jimmy Smith’s finest recordings for Blue Note Records. Nowadays, it’s regarded not just as a genre classic, but a jazz classic as he combined hard bop and soul-jazz.

Just two  months before the release of Back At The Chicken Shack, Jimmy Smith had journeyed to Van Gelder Studio, in Englewood Cliffs, New Jersey, for the final day of what had been a marathon recording session. By the end of February the ‘8th’ 1963, he would’ve recorded four albums in a week. This included Prayer Meetin’ his collaboration with his friend Stanley Turrentine.

This time around, the band featured drummer Donald Bailey, guitarist Quentin Warren, tenor saxophonist Stanley Turrentine Jimmy Smith on Hammond organ. They were joined during for the session by bassist Sam Jones as they recorded eight tracks.

Bandleader Jimmy Smith had written Prayer Meetin’, Picnickin’ and Smith Walk. He decided to cover When The Saints Go Marching In and Ivory Joe Hunter’s I Almost Lost My Mind. They were joined by Wilmoth Houdini’s Stone Cold Dead In The Market (He Had It Coming), Gene Ammons’ Red Top plus Gene Austin and Nathaniel Shilkret’s Lonesome Road. Six of these tracks became Jimmy Smith’s Blue Note Records swansong Prayer Meetin’.

During the session which was engineered by Rudy Van Gelder and produced by Alfred Lion, bassist Sam Jones only played on Lonesome Road and Smith Walk. However, neither track made it onto Prayer Meetin’ which was released in 1964 and was another quartet recording.

When Prayer Meetin’ was released in 1964, the album was billed as Jimmy Smith With Stanley Turrentine. By then, soul-jazz pioneer Jimmy Smith had signed to Verve and embarked upon a new chapter in his career. He watched with interest when Prayer Meetin’ was released and critics lavished praise on his latest collaboration with Stanley Turrentine. It was hailed as the perfect way to close the triumvirate of albums they had recorded for Blue Note Records.

When the album was released in 1964, Prayer Meetin’ reached eighty-six on the US Billboard 200 where it spent twenty weeks. This meant the album was one of the most successful albums Jimmy Smith released on Blue Note Records. This was ironic given he had left the label a year earlier. However, he bowed out in style.

Prayer Meetin’ was Jimmy Smith’s Blue Note Records’ swansong and found him flitting between and fusing musical genres. The album opener and title-track is best described as jazz-gospel while I Almost Lost My Mind has a late night bluesy sound that’s wistful and invites reflection. It also features some of the best solos from Messrs Smith and Turrentine on the album. Wilmoth Houdini who was born in Trinidad and Tobago and moved to American where he wrote Stone Cold Dead In The Market. The The cover stays true to the original and sashays along a Caribbean and Latin influences present as the sultry saxophone dances above the Hammond organ resulting in a track that will puts a smile on anyone’s face.

A joyous and uplifting version of When The Saints Go Marching In opens side two and finds the quartet combining gospel and soul-jazz. Add to this a jazz-tinged guitar and a spellbinding tenor saxophone solo from Stanley Turrentine and the result is a truly memorable cover of this classic. As Donald Bailey provides the heartbeat on Red Top washes and then stabs of Jimmy Smith’s Hammond organ accompany Stanley Turrentine’s swinging tenor saxophone. It plays a leading role before passing the baton to the bandleader before they’re reunited as the saxophone and organ soar above the arrangement on a funky, swinging and toe tapping slice of soul-jazz. The tempo rises on Picknickin’ which closes Prayer Meetin’. Jimmy Smith’s fingers fly up and down the keyboards while the drums and jazzy guitar play supporting roles. Right up until the last minute it’s the Jimmy show. Then Stanley Turrentine enters his playing his subtle as he fills the gaps and lets his friend Jimmy Smith play a starring role on what was the last album he recorded for Blue Note Records.

Despite Jimmy Smith’s last recording for Blue Note Records taking place in 1963, the label was still releasing new albums right up until 2007.  was prolific during his time with Blue Note Records when he was one of the pioneers of soul-jazz and also one of its finest exponents.

Soul-jazz is a starting point for Jimmy Smith and Stanley Turrentine who combine switch between and combine blues, funk, gospel, hard bop and Latin on Prayer Meetin’. Seamlessly the move between and fuse disparate genres as they reinvent familiar tracks and take them in a new direction. Sometimes, the music is wistful and ruminative and other times it’s uplifting, joyous and stirring as Jimmy Smith and Stanley Turrentine prove to be a potent partnership. They bring out the best in each other on Prayer Meeetin’ which was Jimmy Smith’s swansong for Blue Note Records which nowadays, is regarded as one of the finest albums he recorded for the label.

Fifty-six years after the release of Jimmy Smith and Stanley Turrentine final’s collaboration for Blue Note Records, Britain and America are becoming secular societies, but their Prayer Meeetin’ is one where there would be standing room only and dancing in aisles. 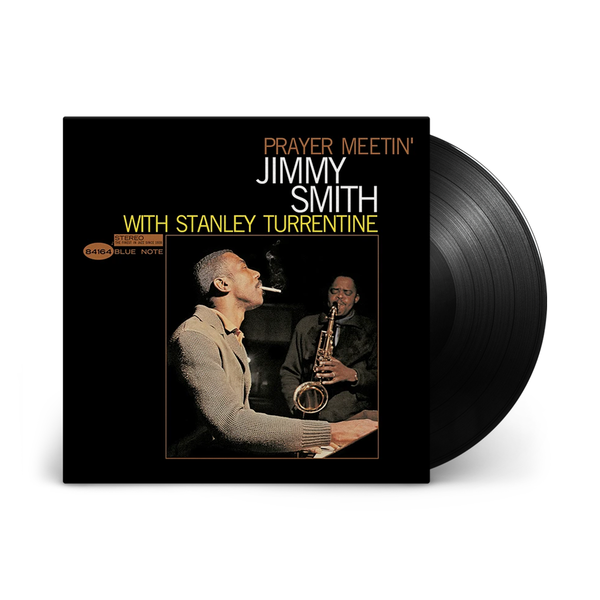