Ramey Lewis went on to release fourteen studio and live albums for Cadet Records between 1965 and 1972, and enjoyed million selling singles with The In Crowd Hang On Sloopy and Wade In The Water. With three gold discs to his name, Ramsey Lewis was one of the most successful jazz pianists, and was also enjoying something that many jazz musicians craved…crossover appeal.

By 1966, Ramey Lewis’ albums were regularly charting high in the US R&B and US Jazz charts as his popularity continued to grow. However, many of Ramsey Lewis’ albums were now charting the US Billboard 200, as his music continued to find a wider audience after the success of The In Crowd, Hang On Sloopy and Wade In The Water. This triumvirate of singles had introduced Ramsey Lewis’ music to a non-jazz audience who suddenly, were buying his albums. It looked like Ramsey Lewis had hit the musical jackpot.

Later in 1972, Ramsey Lewis released his Columbia debut Upendo Ni Pamoja which was a trio recording that featured drummer and percussionist Morris Jennings and bassist Cleveland Eaton. They worked their way through eight cover versions and Cleveland Eaton’s Trilogy of Morning, The Nite Before and Eternal Peace. It was part of album that received mixed reviews from critics, who believed that the album was a couple of tracks from being an essential album from Ramsey Lewis. He was hoping that his next album would fare better.

It wasn’t long before Ramsey Lewis began work his next album which became Funky Serenity. It saw the musical chameleon continue to reinvent himself. 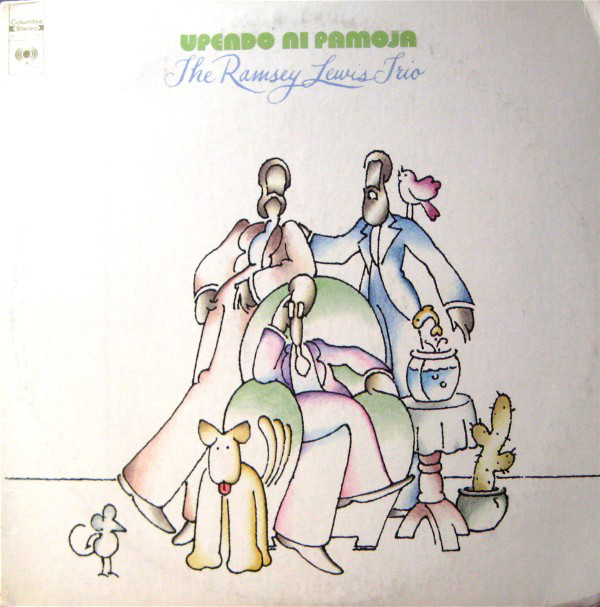 After the mixed reviews of Upendo Ni Pamoja, Ramsey Lewis was determined to make an impression with his next album Funky Serenity. It would eventually feature a mixture of cover versions and songs penned by Ramsey Lewis, Cleveland Eaton and Morris Jennings. This included What It Is!, Serene Funk and Dreams. Violinist and percussionist Eddie Green who was drafted in to play on Funky Serenity contributed Kufanya Mapenzi (Making Love) and My Love For You. They were joined by covers of Homer Banks, Carl Hampton and Raymond Jackson’s (If Loving You Is Wrong) I Don’t Want to Be Right, Justin Hayward’s Nights In White Satin, Thom Bell and Linda Creed’s Betcha by Golly, Wow and Ralph MacDonald and William Salter’s Where Is The Love. These nine tracks were recorded by a quartet which was produced by Ramsey Lewis.

When recording of Funky Serenity began, drummer, percussionist and conga player Morris Jennings was joined by bassist Cleveland Eaton and Ramsey Lewis who played piano, electric piano and harpsichord. Violinist and percussionist Eddie Green was the final member of the quartet that recorded Funky Serenity.

When critics heard Funky Serenity, it was well received by critics who called the album an essential album from Ramsey Lewis. It was regarded as a much stronger album and  Ramsey Lewis’ Columbia debut, and finds him combining elements of blues, funk, gospel, pop, soul and even briefly, a hint of avant-garde. However, Funky Serenity was a reminder of why Ramsey Lewis was one of the most successful jazz pianists of his generation.

Kufanya Mapenzi (Making Love) sets the bar high on Funky Serenity before the ballad, If Loving You Is Wrong is given a jazzy makeover.  Very different is the gospel-tinged and funky What It Is!, which is a reminder of  Ramsey Lewis’ mid-sixties classic sound. My Love For You is a dreamy, mid-tempo ballad that ebbs and flows, before giving way to Nights In White Satin, where Ramsey Lewis drops the tempo and Ed Greene’s violin adds a brief avant-garde influence as they try to reinvent a classic. It’s all change on Serene Funk which is slow, bluesy and funky, as Ramsey Lewis pounds at the electric piano and plays a starring role. Initially, Dreams is atmospheric, eerie and otherworldly before heading in the direction of funk. This leaves just covers of Betcha by Golly, Wow and Where Is The Love which ensures that Funky Serenity closes on a high.

Buoyed by the reviews of Funky Serenity, an edited version of Kufanya Mapenzi (Making Love) was released as a single, but failed to trouble the charts. To make matters worse, when Funky Serenity was released in 1973, it failed to chart in the US Billboard 200 and US R&B charts. However, Funky Serenity reached number seven in the US Jazz charts, which offered a small crumb of comfort to executives at Columbia.

After Funky Serenity’s failure to crossover, Ramsey Lewis came up with an interesting concept for his third album for Columbia. He wanted to reinvent some of his biggest and best known hits that he released on Argo and Cadet Records. This included his three biggest hits The In Crowd, Hang On Sloopy and Wade In The Water which would featured on Ramsey Lewis’ Newly Recorded All-Time Non-Stop Golden Hits, which later, became known as Ramsey Lewis’ Golden Hits.

Ramsey Lewis chose a total of nine tracks, which also included Blues For The Night Owl, Hi-Heel Sneakers, Carmen, Song Of Delilah, Slipping Into Darkness and Something You Got. They were joined by the three million selling singles The In Crowd, Hang On Sloopy and Wade In The Water, which were recorded later in 1973.

This time around, it was just a trio of drummer and percussionist Morris Jennings was joined by Cleveland Eaton on bass and standup bass and Ramsey Lewis who played piano and electric piano. Taking charge of production as the trio set about reinventing some of his best know songs was Ramsey Lewis.

When critics heard Ramsey Lewis’ Golden Hits, they were keen to hear the new versions of his three million selling singles. They didn’t have long to wait with a joyous, Caribbean influenced version of Hang On Sloopy opening the album. Wade In The Water the rhythm section proving an almost rocky backdrop to Ramey Lewis’ piano as he stayed true to his 1966 soul-jazz version. There’s also a funkified   version of Hi-Heel Sneakers and a remake of Ramsey Lewis’ first funk hit Slipping Into Darkness. However, closing the album was a The In Crowd  where a rocky rhythm section provides the backdrop for Ramsey Lewis who plays piano and harpsichord and closes the album on a high.

Upon the release of Ramsey Lewis’ Golden Hits later in 1974, the album sneaked into the US Billboard 200 and 198 and reached a disappointing fifty in the US R&B charts. However, at least Ramsey Lewis was back in the charts, and could begin work on a new album. 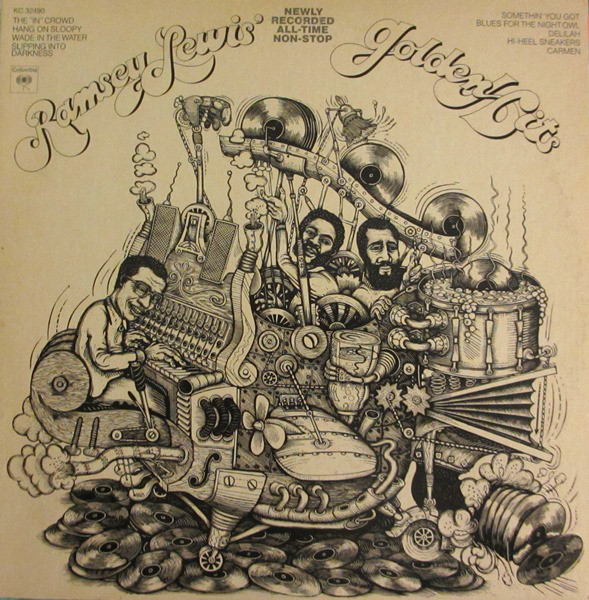 Solar Wind was a much more ambitious album from Ramsey Lewis, as he looked forward, rather than back. To do this, Ramsey Lewis added synths to his musical arsenal, and brought onboard some additional musicians.

The core band featured drummer and percussionist Morris Jennings, Cleveland Eaton on bass and standup bass and Ramsey Lewis who this time around, switched between keyboards, ARP and Moog. They were joined by drummers Carl Mars and Ron Capone, guitarist Steve Cropper, percussionist Calvin Barnes and James L. Herson on Moog. One of the new additions to Ramsey Lewis’ band wrote three of the tracks on Solar Wind.

This was Steve Cropper who joined forces with Carl Marsh to write Sweet and Tender You, Solar Wind and Love For A Day. Meanwhile Ramsey Lewis and Cleveland Eaton wrote Jamaican Marketplace, which was joined by five cover versions. This included Jim Seals and Dash Crofts’ Hummingbird and Summer Breeze, Sonny Rollins’ The Everywhere Calypso, Paul Simon’s Loves Me Like A Rock and Elton John and Bernie Taupin’s Come Down in Time. These nine tracks were recorded by the extended band in Chicago and Memphis, and released in early 1974, with Ramsey Lewis, Cleveland Eaton and Steve Cropper all receiving production credits.

Critics on hearing Solar Wind were impressed by Ramsey Lewis’ third outing for Columbia, which found him moving away from the trio sound that served him well during the fifties and sixties. With a little help from his friends who were part of an expanded band, Ramsey Lewis had recorded a carefully crafted album that featured elements of jazz, funk, R&B, soul and much more.

Opening Solar Wind was  the uptempo Sweet and Tender You which was recorded in Memphis and was one of three tracks produced by Steve Cropper. Sonically and stylistically the track references Ramsey Lewis’ classic mid-sixties recordings for Chess Records. After this, the understated, but familiar strains of Hummingbird are a welcome addition, before giving way to Solar Wind, which is another slice of R&B that was made in Memphis but features a Motown backbeat. Ramsey Lewis heads to the Caribbean on Jamaican Marketplace and The Everywhere Calypso, before returning to familiar territory with three cover versions. There’s the jazz-funk of Summer Breeze, while gospel and soul-jazz combine on Loves Me Like A Rock and a pop-rock version of Come Down In Time. Closing Solar Wind was the filmic funk of Love For A Day.

After being well received by critics, Ramsey Lewis and executives at Columbia had high hopes for Solar Wind. However, upon its release in 1974 the album sunk without trace and Ramsey Lewis was back to square one.

It was a frustrating time for Ramsey Lewis as his career at Columbia wasn’t going to plan.  In 1972, Upendo Ni Pamoja which was his debut for Columbia had failed to chart and so had the followup Funky Serenity in 1973. Then Ramsey Lewis’ Golden Hits  reached 198 in the US Billboard 200 and fifty in the US R&B chart in 1974. This was a small crumb of comfort to a man who had enjoyed million selling singles when signed to Chess. It was no wonder that Ramsey Lewis decided to change direction on Solar Wind.

Ramsey Lewis wasn’t going to rest on his laurels and wanted to try new things. This included the new technology that was playing an important part in music. On Solar Wind which was the thirty-eighth album of his career Ramsey Lewis used synths on an album for the first time. They brought a new dimension and sound to Solar Wind, which brought a new dimension to his music on this oft-overlooked album that nowadays is regarded as a cult classic..

For Ramsey Lewis, Solar Wind was the album that got away and had the potential to rejuvenate his career which had stalled. It was an album that referenced his classic sixties sound but also included elements of Caribbean music, funk, gospel, jazz-funk, pop-rock, R&B, soul, soul-jazz and Southern Soul. Solar Wind was a musical melting pot that featured a myriad of musical genres and influences as  musical chameleon Ramsey Lewis continued to reinvent himself and explore new musical ideas.