QUICKSAND-HOME IS WHERE I BELONG.

Quicksand-Home Is Where I Belong.

Musical history is littered with examples of groups who only ever released one album during their what proves to be a short-lived career. Especially, during the late-sixties and early seventies when many record companies had unrealistic expectations.

All too often, when a band’s debut album failed to find an audience they were unceremoniously dropped by their record label. This was yet another example of short-term thinking in the music industry.

There could’ve been any number of reasons for an album to fail, and often the blame lay fairly and squarely at the door of the record company. In Britain and America there were many smaller labels that were run by enthusiastic amateurs who talked a good game but couldn’t deliver. Sadly, that’s still the case today and getting mixed up with these dreamers and fantasists can damage a band’s future prospects.

Many bands who signed to smaller labels or imprint in late-sixties and early seventies would soon regret their decision. Often, a band was so desperate to release an album that they signed a one album deal, with the option of a second album. Straight away, this put the record label in a stronger position. If the album did well, they picked up the option and if it failed the band were dropped. All to often, bands didn’t understand that contract they had signed or knew the questions to ask before signing on the dotted line. They just wanted to release an album.

Fast forward a few months and the album has been recorded, mixed and mastered; the album cover designed and the LPs are being produced at the pressing plant and are due to be sent to the distributor. By then, the band has realised that all isn’t well behind the scenes at the label. It lacks the financial muscle and marketing expertise to properly promote an album. The owner is out of their depth and is floundering, and the band know that the album that they had spent so long working on had no chance of success. This they know was their one and only chance to release an album and if it fails to find an audience their dream is over and it’s back home and to the 9 to 5 life in the factory or office.

When the album is eventually released their worst fears come true when it sinks without trace. At the post mortem, the label owner blames the distributor, the PR company, retailers who failed to stock the album, critics who failed to review it and DJs who failed to play it. The band listen and know that the only person to blame is the label owner and wait to be told there won’t be a second album. They’ve just joined the ranks of the groups who only ever releases one album.

This includes Quicksand who were formed in Port Talbot, in South Wales, in 1969 and featured drummer Robert Collins, future Man and The Neutrons bassist Will Youatt, guitarist Jimmy Davies and keyboardist Anthony Stone. The group started life as a covers band but the time they signed to the Carnaby label in 1970 their music was evolving.

Having signed to the Carnaby label Quicksand went into the studio with producer Terry Britten and recorded two Will Youatt compositions. Passing By was chosen as the single and Cobblestones relegated to the B-Side. Quicksand’s debut single saw the group move in the drection of psychedelic rock. However, the single wasn’t a commercial success and it was their only release on the Carnaby label.

Not long after this, Will Youatt left and was replaced by Phil Davies. This new lineup of Quicksand Mk II would go on to release their sophomore single.

Having left the Carnaby label, Quicksand concentrated their efforts on playing live and were familiar faces in clubs and concert halls all over Britain. Quicksand were putting in the hard yards and honing their sound in the hope that one of the many A&R men would spot them playing live.

Their luck was in and they were signed to Dawn Records which was Pye’s “underground and progressive” label. This seemed the perfect home for Quicksand.

After signing to Dawn Records, Quicksand went into the studio with producer Tito Burns to record two Phillip Davis compositions for their sophomore single. The song chosen for the single was the joyous and optimistic sounding Time To Live which features the band’s trademark harmonies as they combine the West Coast Sound, fusion and progressive rock keyboards. On the B-Side was the hidden gem Empty Street, Empty Heart which is a quite beautiful folk rock track with a country influence that shows another side of Quicksand. These two tracks showed what the Dawn Records’ latest signing was capable of.

Sadly, when Time To Live was released later in 1973 the single failed to trouble the British charts. This must have been a disappointment for Quicksand who by then, had been together for over four years.

Despite the commercial failure of Time To Live, Quicksand returned to the studio to record six more tracks for their debut album Home Is Where I Belong. Hideaway My Song, Sunlight Brings Shadows, Overcome The Pattern/Flying, Home Is Where I Belong and Hiding It All were also written by Phillip Davies. The other track was Seasons/Alpha Omega which was written by former band member Will Youatt. Taking charge of production this time round were Geoff Gill, Glyn Jones and the members of Quicksand. The result was an eclectic sounding album.

It’s hard to believe that the track that Hideaway My Song which eventually opened the album Home Is Where I Belong was recorded by a group from Port Talbot, in South Wales. It has a  feelgood sound that sounds as if it’s been influenced by the California Sound which was popular at the time the album was recorded.

Very different is Sunlight Brings Shadows where the tempo rises as Quicksand change direction and unleash an unrelenting example of heavy progressive rock. Key to its success are the driving rhythm section, blistering rock guitar, banks of keyboards and Quicksand’s trademark harmonies.

Then Overcome The Pattern/Flying shows different sides to the group. It starts off as a progressive rock track with some stunning psychedelic guitar playing from Jimmy Davies before heading into freak out territory at the midway point. There’s a trippy sounding interlude before things become even more spacey, psychedelic and way-out. Lysergic doesn’t even come close to describing the second part of this musical trip.

Home Is Where I Belong is one of the most commercial sounding tracks on the album. It’s rocky and progressive in parts, and is an uplifting song with a feelgood sound and strong hook.

It’s all change on Seasons/Alpha Omega which is another track that lasts over eight minutes and allows Quicksand to showcase their considerable talents. Especially during the solos. Initially, there’s a nod to Pink Floyd before the band spring into action and the tempo rises. Soon, searing guitar, banks of keyboards, a galloping rhythm section and harmonies that compliment the lead vocal make an appearance.What follows is a masterful and majestic example of progressive rock. To non believers, the music may sound overblown and pompous but give it a chance and it’s soon apparent that this is the album’s progressive epic that shows just what Quicksand were capable of.

Quicksand have saved one of the best on Home Is Where I Belong. Hiding It All close a quite beautiful and moving progressive folk anthem that is sure to tug at the heartstrings and should’ve been released as a single.

Sadly, Quicksand’s time at Dawn Records was at an end and they never returned with a followup to Home Is Where I Belong.

Quicksand were a hugely talented and versatile band, and Home Is Where I Belong is proof of that. It’s usually described as a progressive rock album but it’s much more than that. There’s elements of the California Sound, country, folk rock, fusion, progressive folk, psychedelic rock and the West Coast Sound on Home Is Where I Belong. They seamlessly switched between and fused genres on a carefully crafted album that should’ve found a much wider audience.

That was despite being signed to Dawn Records which was Pye’s “underground and progressive” label. Maybe Dawn Records was the wrong label for Quicksand and they would’ve succeeded on a bigger label?

Especially if the had played the long game by signing Quicksand on a longer deal and helped them break into the lucrative American and European markets. Quicksand were ostensibly a progressive rock band but could also write radio friendly anthems and beautiful ballads. Maybe their music would’ve been more successful in America? Given the American influences on the album and the popularity of progressive rock in early 1974 maybe record buyers in the land of the free might have embraced, enjoyed and appreciated Quicksand’s debut album Home Is Where I Belong?

Sadly, the album was never even released in America in 1974. This was an own goal from Dawn Records who could’ve licensed Home Is Where I Belong to an American label. However, as is often the case after an album fails commercially the label moves on to the next project. Sometimes labels lose interest and other times they’re reluctant to spend any more money or even invest any more time on an album that wasn’t a commercial success. That’s a great shame and is frustrating and heartbreaking for a band.

That must have been the case for the four members of Quicksand who never recorded a followup to Home Is Where I Belong. Sadly, very few record buyers, even fans of progressive rock discovered the delights of an album that had something for everything. Progressive rock epics and psychedelic freakouts rub shoulders with anthems and beautiful ballads on Quicksand’s long-lost Magnus Opus Home Is Where I Belong which rather belatedly is starting to find a new and wider audience.

Quicksand-Home Is Where I Belong. 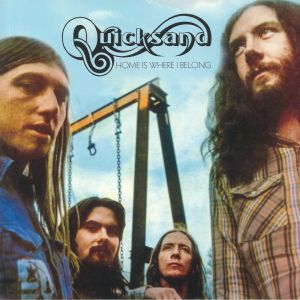