On May the ’30th’ 1993, Sun Ra passed away aged seventy-nine and that day, music was in mourning at the loss a musical pioneer who had played his part in rewriting the history of jazz. From the late-fifties, Sun Ra was one of the pioneers of free jazz and helped shape this new genre.

For the best part of forty years Sun Ra pushed musical boundaries to their limits, and sometimes, way beyond. He was a pioneer and innovator and was also a perfectionist and relentless taskmaster. With some of most talented, inventive and adventurous musicians of their generation Sun Ra set about honing his Arkestra’s sound. He was demanding and had exacting standards. Second best was no use to Sun Ra.That was why his Arkestra featured innovators and musical adventurers that had the same high standards and drive and determination that he had.

This included alto saxophonist Marshall Allen who played an important part in the sound and success of the Sun Ra Arkestra. That was the case right up until Sun Ra’s death in 1993.

Since then, the Sun Arkestra has continued to tour and is led by  Marshall Allen who is now ninety-six. However, the Sun Arkestra has never recorded another album. As the years passed by, it seemed increasingly unlikely that they ever would return with a new album. Instead, a myriad of reissues, compilations and live albums have been reissued over the last few years. However, after twenty-seven years’ radio silence the Sun Ra Arkestra has returned from its latest voyage and has delivered a new album Swirling which was recently released by Strut. Swirling was recorded in Philly by the Sun Ra Arkestra under the direction of Marshall Allen.

When work began on what eventually became Swirling, it was decided to record nine of Sun Ra’s finest and most celebrated compositions. The other tracks was the Marshall Allen composition Swirling which later lent its name to the album.

Once Swirling was complete, the Sun Ra Arkestra’s comeback album was announced. By then, twenty-seven years had passed since the death of Sun Ra. For many of his loyal legion of fans the release of Swirling came as a complete surprise and they didn’t know what to expect? Some wondered how it could it be called a Sun Ra Arkestra album without the charismatic bandleader at the helm? He was the man many regarded as Mr Magic and they believed was a musical genius. They wondered what would a Sun Ra Arkestra without Sun Ra sound like? Would it be a pale imitation of the once great Arkestra or would Swirling be a welcome addition to the rich musical legacy that Sun Ra left behind?

The best way to describe Swirling is a lovingly recorded tribute to the much-missed bandleader and musical visionary. Under the direction of Marshall Allen they pay homage to one of the giants of jazz and a man who nowadays is regarded as a pioneer of Afrofuturism and has influenced several generations of musicians. Sadly, it wasn’t always like this and for parts of his career critics, cultural commentators and record buyers didn’t understand Sun Ra’s music. Thats’s changed and Sun Ra is receiving the recognition he so richly deserves.

On Swirling the Sun Ra Arkestra flit between and seamlessly combine musical genres and in doing so recreate their much-loved sound. They combine everything from avant-garde, bebop and free jazz to abstract electronics, Chicago blues, early rock ’n’ roll, improv and even swing on the Marshall Allen composition Swirling. Add to this Egyptian history and space-age cosmic philosophy that was part of the inspiration for Sun Ra’s music.

However, there’s a degree of darkness and an ominous sounds during parts of Swirling. Other times there’s an air of mystery as the latest incarnation of the Sun Ra Arkestra revisit some of the late, great bandleader’s classic compositions. Some of them feature new arrangements.

This includes album opener Satellites Are Spinning/Lights On A Satellite which features the debut of vocalist Tara Middleton. She joined the Arkestra in 2012 and delivers a beautiful and captivating cover of a song that was originally sung by the late June Tyson. It features the lyrics: “A better day is breaking, the planet Earth’s awakening,” and a fitting homage to a truly great vocalist who played an important part in the Sun Ra Arkestra story.

Seductive Fantasy is a near twelve minute epic that allows the Arkestra to stretch their legs during a track where Chicago blues, New Orleans jazz and abstract electronics combine with free jazz on a track that’s sometimes mesmeric but other times sounds futuristic and swings as if it’s part of the soundtrack to a sci-fi soundtrack.

Swirling was written by Marshall Allen, and heads in the direction of swing as the Arkestra are transformed into a big band. However, it’s a big band with a difference. They combine elements of free jazz into this swinging track that features a sultry vocal from Tara Middleton who steals the show.

Angels and Demons At Play is another Sun Ra classic that was given a makeover during the recording of Swirling. Tara Middleton delivers one of her finest vocals. It’s slow, deliberate and full of emotion as abstract electronics, screeching, scratchy free jazz horns and a swaying Egyptian melody accompany the vocal as a familiar track takes on a new meaning.

Melodic describes the massed vocals at the start of this journey across the Sea Of Darkness/Darkness. Soon, there’s a sense of foreboding as the music becomes mesmeric and the darkness starts to descend. Braying horns combine with the piano as the Arkestra sails across the sea in search of better days.

Upbeat, jazzy, futuristic and moderne describes Tara Middleton’s vocal on Rocket No. 9 which is delivered against a bebop riff. Soon, electronics interjects adding sci-fi sounds which the Arkestra combine with free jazz on this ambitious genre-melting track.

Otherworldly describes the introduction to Astro Black as electronics usher in Tara Middleton’s vocal. Sometimes she sings unaccompanied and other times a choir of synths and sirens provide an accompaniment to her emotive vocal on this space-age and cinematic song.

Wistful, futuristic and jazzy describes the introduction to Infinity/I’ll Wait For You. Wailing, mournful horns combine with a piano that’s probed and pounded as the Arkestra unleash blasts of free jazz. They give way to cartoon and sci-fi sounds then a whispery vocal as the track takes on an experimental sound. Later rolls of drums drive the arrangement as a horn sounds and the Arkestra almost gallop along before returning to the earlier frenzied and sci-fi sounds on a track that’s experimental and innovative.

The tempo drops on Sunology as the Arkestra become an intergalactic big band. They accompany Tara Middleton as se delivers one of her finest vocals. It’s deliberate, heartfelt and emotive as the arrangement veers between swinging, experimental and understated before reaching a crescendo.

Just a piano opens Door Of The Cosmos/Say closes Swirling before the joyous massed vocals enter. Meanwhile the piano is pounded before the blazing horns and percussions are joined by a myriad of otherworldly and sci-fi sounds. Later, the drums and sultry saxophone play their part in this impressive jam as the Arkestra close the album on a high with one of their finest moments.

Since Sun Ra’s death in 1993 his Arkestra have continued to tour but never released a new album. That was until they recently released Swirling on the Strut label. It features covers of nine of his classic tracks. Fittingly, some of these tracks are given a makeover and head in a new direction showing a different side to what are familiar tracks. The result is a fitting homage to Sun Ra who was a true giant of jazz and a pioneer of free jazz.

Sun Ra was never content to stand still musically and was always looking to reinvent familiar tracks. The original version of a song was merely the starting point. That is the case on Swirling. What the song became, was anyone’s guess as Sun Ra was always determined to innovate and when he reinvented a track, he took the music in the most unexpected direction. He combined Egyptian history and space-age cosmic philosophy with free jazz, avant-garde and improv. Another component of Sun Ra’s music was his unique and inimitable brand of futuristic, space-age jazz which was part of an innovative fusion that totally transformed the career of the man born Herman Poole Blount.

He was a huge influence on all the members of the Sun Ra Arkestra, and that includes ninety-six year old Marshall Allen who leads from the front on Swirling. In doing so, he plays his part in the sound and success of the San Ra Arkestra’s comeback album. So does vocalist Tara Middleton who channels the sprit of June Tyson and does so with aplomb on Swirling. Sun Ra would’ve enjoyed her contribution and welcomed her to the Arkestra.

On Swirling the Sun Ra Arkestra pays tribute to their much-loved and much-missed leader as they reinvent some of his classic tracks and take them in a new and different direction. In doing so, they’re a reminder of the ambitious and innovative music that free jazz pioneer Sun Ra released during his long illustrious career when he was at the helm of his Arkestra and released over 125 albums. 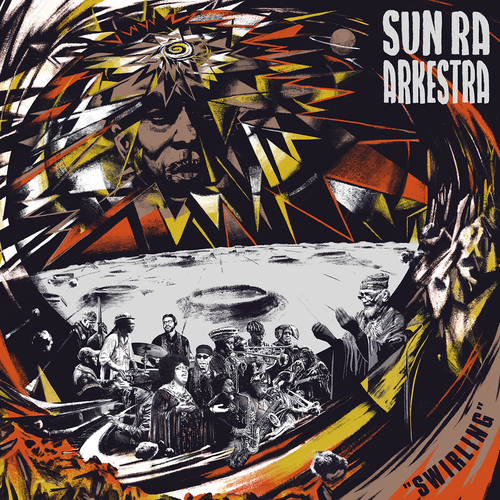