When brothers Coke and Pete Escovedo were growing up in Oakland in the sixties, they were  surrounded by Latin music which influenced them when they decided to form their own group, Azteca.

Just like Santana, Azteca’s music was a fusion of musical genres and influences, including Latin and funk. They were also a group that was best known for their vocal and percussive talents and also blazed a trail for Latin music. Azteca introdced the sounds of Salsa and Mamba to a much wider and appreciative audience and nowadays are remembered as a pioneering band.

Referring to Azteca as a band in almost an understatement. During the four years that they were together the lineup of what’s best described as a Latin orchestra featured between fifteen and twenty-five musicians. This included some top musicians.

Among their number were bassist Paul Clark who played on several Herbie Hancock albums, while drummer Lenny White worked with everyone from Miles Davis through to Stanley Clarke and Freddie Hubbard. With such a multitalented lineup it was no surprise when Azteca signed to Columbia Records and in 1973 released their eponymous debut album. It was the latest chapter in their story.

During the last few years of the sixties, music was evolving quickly. Musical fashions were changing and often genres were melting into one. Often artists fused a variety of genres and influences to create their own signature sound. This included who Jimi Hendrix merged blues, rock, jazz, psychedelia, funk and Latin music. Santana did something similar.

Their music was a melting pot of rock, blues, psychedelia, jazz, funk and Latin music. Seamlessly, Santana melted genres into something new and innovative. Two musicians that played their part in Santana’s unique and pioneering sound were brothers Coke and Pete Escovedo. Having been part of Santana’s rise to success they decided to form their own band, Azteca.

For Coke and Pete Escovedo forming Azteca made perfect sense. They had grown up in Portland not just surrounded by Latin music but totally immersed in the music. It was something they loved, lived and breathed. They were so keen to perfect their percussive skills that they decided to organise Mambo lessons. During these lessons, they were able to benefit from the experience of other musicians’ experience. The effect this had was to hone and perfect their percussive skills. However, it wasn’t just Latin music that influenced Azteca’s music. Just like Santana, their music is a melting pot of rock, blues, psychedelia, jazz, funk, fusion, Salsa, Mambo and Latin music. This melting of music brought Azteca to the attention of Columbia Records.

Columbia Records signed Azteca and in September 1972, work began on recording their eponymous album Azteca. Recording took place at Columbia Studios in San Francisco. Joining Coke and Pete Escovedo were over sixteen of the most talented jazz and Latin musicians of the time.

They also wrote or cowrote the eleven  tracks on the album. This included George DiQuattro writing Peace Everybody who Pete Pete Escovedo who cowrote Ah! Ah with Tito Puente. Once Azteca was recorded the album was scheduled for release in December 1972.

On the release of Azteca in December 1972, it reached number 151 in the US Billboard 200 and number thirty-eight in the US R&B Charts. However, when the lead single Mamita Linda was released as  1972 it failed to trouble the charts. It was a similar case when Ain’t Got No Special Woman was released in 1973. Despite that, Azteca’s eponymous debut album had introduced the group’s unique and innovative sound to a wider audience.

La Piedra Del Sol opens Azteca and  is just 1:13 long and is a tantalising taste of what’s in store. Urgent, growling horns join forces with meandering, noodling keyboards and dramatic, questioning strings merge with a myriad of percussion. A glimpse of crystalline guitars whets your appetite as jazz, Latin, classical and rock unite dramatically. Now Azteca have your attention they won’t let go.

Mamita Linda picks up where the opening track left off. Thunderous drums, stabs of braying horns, percussion and cascading flute combine as the track explodes into life. The lyrics are delivered in Spanish and English and delivered with a fervor that matches the arrangement. Accompanying the vocal is a truly infectious arrangement that gallops and thunders along, mixing Latin, jazz and Salsa. It’s a mass of percussion, drums and piano while stabs of flute urgently answer the vocal. By the end of the track Azteca must be spent and exhausted at the energy and enthusiasm they’ve expended.

Ain’t No Special Woman sees Azteca seek inspiration from Santana’s Black Magic Woman and is probably the poppiest track on Azteca. From the opening bars you’re hooked, as Latin, rock, jazz, psychedelia and funk are thrown into Azteca’s musical melting pot and stirred for six minutes as the arrangement sashays along. Rico Reyes’ vocal is heartfelt and accompanied by soulful harmonies that later are delivered in a call and response style. Later, when Azteca kick loose, they flourish, showcasing their mesmerizing skills. Frantic percussion, searing, screaming rocky guitars, bursts of growling horns unite to fuse musical genres and influences aplenty. This results in the highlight of Azteca. One can’t can’t help compare Azteca to Santana, albeit with more than a hint of Jimi Hendrix thrown in for good measure.

Empty Prophet sees the tempo drop, with a really moody, bluesy backdrop accompanying Errol Knowles’ despairing vocal. Space is left in the arrangement, proving effective, allowing the vocal to take centre-stage. A wandering bass, rasping horns and thoughtful rhythm section combines with a chiming guitars and Hammond organ. Gradually, the arrangement grows in power and drama. So too does the vocal which grows in emotion, power and doubt, questioning and probing, while breathing life and meaning into some of the best lyrics on Azteca.

Can’t Take the Funk Out of Me sees Azteca combine good-time funk with elements of rock, jazz and Latin music. Add to that gospel tinged harmonies. It’s a delicious fusion. A tough, uber funky bass-line, stabs of blazing horns and sizzling, searing rocky guitar at the heart of the arrangement, while Paul Jackson’s grizzled, sassy vocal briefly is reminiscent of B.B. King. Gospel infused harmonies accompany the vocal as they drive each other to greater heights. Meanwhile, the band showboat and their grandstanding is mesmerising. The rhythm section and horns join keyboards and percussion to create what’s quite simply delicious slice of good time funky music.

When Peace Everybody begins one is reminded of the unmistakable opening to Isaac Hayes’ Shaft. It’s the rhythm section complete with hissing hi-hats that lead to this comparison. Bursts of growling horns transform Azteca into a funk-laden musical juggernaut. Driving the arrangement along are the funkiest bass and searing guitar licks. They’re helped by the impassioned vocal, who are joined by joyous, pleading harmonies. Peace Everybody is their plea. Then later, Bob Ferreria jumps into the driver’s seat, his tenor saxophone growling and moaning, injecting jazz into this musical stew. Bob’s healthy sprinkling of jazz is added to the a plentiful supply of funk, augmented by the addition of Latin, rock and psychedelia. The result is a musical feast, which you’ll want several servings of.

Non Pacem meanders into being, Moody, spacey and pensive soon changes into a driving groove, where funk, jazz and Latin music combine. Grizzled horns, sweet, but spacey vocals and a funky backdrop. Then Tom Harrell takes charge, laying down a trumpet solo that’s peerless. It blazes, growls and rasps, while stabs of Hammond organ fill in the spaces. The rhythm section and mass of percussion join the sixties-tinged vocal. Later, the arrangement takes on an Afro-Cuban sound, while jazzy horns dance dramatically above the arrangement. You never know what’s about to happen. Curveballs are thrown by Azteca, teasing and toying with you but always tantalising and surprising and it’s a case of expect the unexpected.

Ah! Ah! sees a change in style, with the track’s Latin influence shining through. Percussion, flamboyant flourishes of cascading flute and the vocal combine, as the arrangement sashays along. Joining the fun are rasping horns, bursts of pizzicato strings and a pounding bass line. One minute the arrangement sashays along, the next it’s stop-start. Meanwhile, keeping still is impossible during what’s akin to a call to dance.

Love Not Then sees another change in direction and again, there’s a poppy sound to the track. It flows beautifully along, gradually revealing its laidback, melodic secrets. Just a chiming guitar, piano and percussion accompany the understated rhythm section. Then tender harmonies float in, giving way to the sweetest and tenderest of vocals from Wendy Haas. The interplay between the harmonies and the vocal is exquisite, with lush strings adding to the beauty. Warm, subtle keyboards and rasping horns provide musical contrasts as the arrangement flows beautifully along. However, the vocal and harmonies are the finishing touch to a track where beauty, emotion, drama and poppy hooks sit comfortably side-by-side.

It’s almost fitting that  track called Azteca typifies what Azteca’s music was about. This is a fusion of musical genres and influences. During four minutes of music, Azteca manage to incorporate jazz, Latin, Afro-Cuban and elements of rock and funk. Drama, power and surprises aplenty are in-store. Horns inject a jazzy sound, helping drive the arrangement along. Percussion is everpresent adding Afro-Cuban and Latin flavors. For their part, the rhythm section add a touch of funk, while a guitar briefly references rock music. All these references rolled into one are a musical description of the music of Azteca.

Bookending Azteca is Theme: La Piedra Del Sol, which like the opening track, lasts less than two minutes. The arrangement meanders into being, pensive and spacious. A sprinkling of percussion is joined by a broody bass and braying horns. They’re joined by chiming guitar, timbales and percussion. Repetitive, hypnotic and pensive. Azteca probe, questions and quiz, asking a series of musical questions. Towards the end of the track horns provide an answer to the questions, bookending Azteca in style.

Azteca’s eponymous 1972 debut album Azteca, is a compelling, captivating and enthralling musical melting pot. During the eleven tracks on Azteca, musical genres and influences melt into one. There’s everything from Afro-Cuban, blues, funk, fusion, jazz, Latin, Mambo, psychedelia, rock and Salsa on Azteca.  Add to that soulful vocals and gospel-tinged harmonies that are part and parcel of this genre-melting album. Azteca put all this into their musical melting pot and give it a good stir and the result is a delicious musical feast with surprises aplenty.

Curveballs are thrown on regular basis and one learns to expect the unexpected. It’s a musical journey with twists and turns aplenty. Each track is very different from the preceding one and that’s what makes Azteca such an enthralling and fascinating album.

While the words pioneers are used to freely this is a fitting description of Azteca. Rather than play things safe, they push musical boundaries and produce innovative music. Although Santana produced similar music before Azteca, they took this further. The music on Azteca fuses even more musical genres and influences than Santana did. It’s even more complex and multilayered and gradually, and with each listen further subtleties are revealed.

Although Azteca was released in December 1972 it’s an album that has stood the test of time. Sadly, many record buyers have still to discover the delights of this genre-melting cult classic. The music on Azteca is captivating and enthralling and is best described as a musical melting pot where Azteca fuse musical genres and influences aplenty seamlessly and with flair and panache. 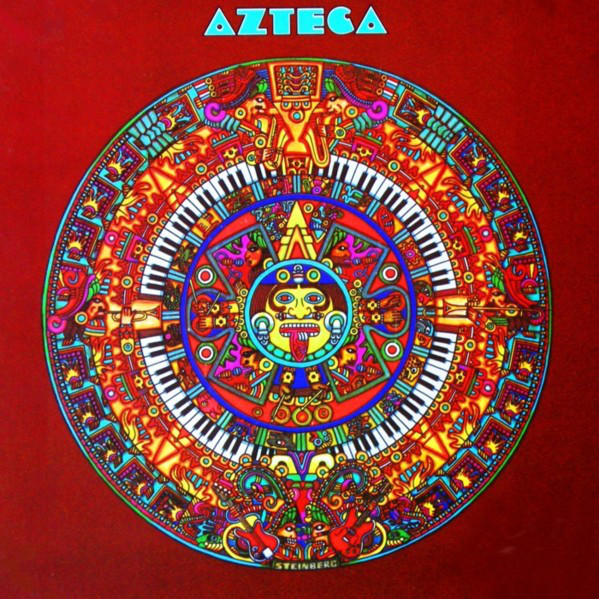