In the spring of 2006, Chicago alternative rock band Wilco and Huntsville  were booked to play at the Festival International de Musique Actuelle de Victoriaville in Quebec, Canada. Wilco played first and their guitarist Nels Cline decided to watch Huntsville’s set and even travelled to the next venue with the Norwegian trio and even bought three of their albums. The group had a new fan.

Despite Huntsville guitarist Ivar Grydeland being a fan of Wilco, he hadn’t realised that Nels Cline was a member of the group. By then, Huntsville and the Nels Cline had promised to keep in touch.

A year later in 2007, Wilco and Huntsville were both booked to appear at the Kongsberg Jazz Festival. That day, Wilco guitarist Nels Cline and the group’s drummer Glenn Kotche agreed to join Huntsville on stage. They had decided to tape the performance, which was lucky as that day, the stars were aligned when Huntsville joined forces with the two members of Wilco on stage and they jammed on the lengthy soundscape Eras. It took up the entire second disc of the band’s stunning sophomore album Eco, Arches and Eras which was released in 2008.

Two more years passed before Huntsville were reunited with the two members of Wilco in Chicago in the summer of 2010 for a concert and recording session. Huntsville performed in the city’s Millennium Park and shared a bill with the dup On Fillmore which featured Glenn Kotche and bassist Darin Gray. That evening, Nels Cline and Glenn Kotche joined Huntsville for the final part of their set. The next day, they were reunited for a recording session and were joined by some new faces.

The recording session took place at the Loft, which is Wilco’s studio and rehearsal space. Joining Huntsville’s Ivar Grydeland, Ingar Zach, and Tonny Kluften were Nels Cline and Glenn Kotche. They were joined by On Fillmore’s bassist Darin Gray and keyboardist Yuka Honda, the cofounder of Cibo Matto who was also an accomplished composer in his own right. This septet were about to participate in a fully improvised sessions.

Huntsville’s Ivar Grydeland remembers the session in the summer of 2010 well: “I think it is pretty amazing how Nels, Glenn, Yuko, and Darin managed to blend into our project, our music, our way of improvising, our aesthetics.” His trio had previously improvised with outside musicians, but for this project he envisioned “a recording that sounded like Huntsville, but with these amazingly great musicians as guests—not just seven musicians improvising with no preconceptions. Like most of our other recordings, decisions about amps, instruments, positioning, volume, the sound in the recordings space, etc., are important factors that contribute to the direction of the improvisations.” The session at Wilco’s Chicago was deemed a success by two members of Huntsville.

Ingar Zach of Huntsville said: “I remember it as quite chaotic in the studio. A lot of people with lots of sounds. A bit difficult to hear each other, but there is something about the vibe of the recording and also the mix, and how it turned out that I like a lot. I think the presence of the four guests just amplifies the music that Huntsville did at that time, and also slightly tilt it in other directions because of the lovely contributions from the four of them.”

One of them was Glenn Kotche also remembers the improvised session at The Loft: ““For me, it was almost easier to improvise in that setting since the parameters were a bit more clear and focused. They do have a sound and it was nice having a rough idea ahead of time of how I might be able to best fit into what they do, of course, all the while still keeping it free and me still being me. I just viewed it more like an expanded chamber band setting, with Yuka and Darin bringing their brilliance and that Huntsville sound at the core of it all, with all of us bringing something personal to the music and it all branching out in various ways.”

It wasn’t until 2012 that Huntsville were reunited with Nels Cline and Glenn Kotche when they played at the Guelph Jazz Festival in Canada. The members of Huntsville and Wilco had hoped that they would get the opportunity to play together again.

Sadly, that has never happened because of Wilco’s punishing touring schedule. They spend much of the year on the road and have to find time to record new albums. That’s a great shame because Bow Shoulder which has just been released by Hubro Music documents the fully improvised session at the Wilco Loft in Chicago, in the summer of 2010.

Ivar Grydeland decided to mix the Bow Shoulder sessions. These mixing sessions were lengthy but the group wasn’t happy with the result. It was a case of starting the mix again.

Ingar Zach explains: “In the end Ivar started to work on a new mix and that changed everything. The music changed and we found the drive again to try to finish it.”

This took a lot of patience and Ivar Grydeland remembers the mix session well: “It was a massive job to dig into this. There is a lot going on: two basses, two drum kits and percussion, two guitars, and often what Yuka plays sounds like a third guitar to me.”

When the mix was finished and Huntsville listened back to Bow Shoulder the time and effort was worthwhile. It features Huntsville, Wilco’s Nels Cline and Glenn Kotche plus On Fillmore’s Darin Gray and Yuka Honda during another session where the stars were once again aligned. Bow Shoulder is a reminder of this successful collaboration from the summer of 2010 in the Windy City.

Despite the fully improvised sessions for Bow Shoulder  featuring and showcasing seven successful and talented musicians their own musical identities still shine through on this genre-melting album. This includes two drummers, two bassists, two guitarists and a percussionist. However, the mix doesn’t seem crowded.

That’s the case on the album open Side Wind which is a twenty-one minute epic that gradually reveals its secrets. It toys with the listener as abstract and cinematic sound combine with guitars and distant galloping percussion. Dramatic washes of sound and instruments are added the multilayered mix which is building. By the midway point, Huntsville and friends are driving the soundscape along and at one point has taken on a melodic and dreamy sound. This is constantly evolving and soon, it’s like  a journey on an express train as the ensemble head out of the Windy City destination unknown. The arrangement scrabbles along beaming hesitant as if running out of steam. By then, there’s a nod to Wim Wenders before the arrangement rebuilds and elements of ambient, avant-garde, experimental music and eerie, sci-fi sounds merge into one as the journey into the unknown continues and sounds like the soundtrack to a short film that would put the thrill in thriller.

Higher is a spacious, angular track where a weeping, jangling guitar and probing bass join forces as the arrangement meanders dreamily along. There’s a brief nod to the dusty soundtrack to Paris Texas. Meanwhile, the music becomes ruminative and later takes on a churning, lysergic sound before a chiming guitar proves mesmeric as the rest of the arrangement becomes atmospheric. However, there’s a degree of tension as the tempo rises and Huntsville and friends create a dramatic, edgy and otherworldly cinematic sounding track that brings this adventure in sound to a close.

Pounding, thunderous, industrious and challenging sounds combine on Lower which is the most ambitious sounding track. It’s certainly not easy listening but it’s rewarding and captivating as the soundscape reveals its many secrets. The septet is enjoying the opportunity to improvise and later the multilayered track becomes melodic and dramatic. Then the tempo rises and the rhythm section power the arrangement along, pounding clattering and chattering before it races along and eventually reaches a dramatic crescendo.

Ten years after Bow Shoulder was recorded in Chicago in the summer of 2010, it’s been belatedly released by Huntsville and Yuka Honda, Nels Cline, Darin Gray, Glenn Kotche. It’s a reminder of a day when the stars were aligned during this fully improvised session that resulted in the ambitious genre-melting album Bow Shoulder. It finds Huntsville and friends combining everything from ambient and avant-garde to electronic, experimental and improv to industrial, jazz and rock. This results in a captivating musical adventure.

The music on Bow Shoulder veers between cinematic, dreamy, melodic and ruminative to futuristic and otherworldly right through dramatic, hypnotic, lysergic and mesmeric. It’s always ambitious, occasionally challenging and always inventive, innovative and rewarding to listen to. Bow Shoulder is cerebral music that takes the listener on a journey where Huntsville and their friends paint pictures during what sounds like the soundtrack to a short film that’s yet to be made but deserves to be made and hopefully will be sometime soon. 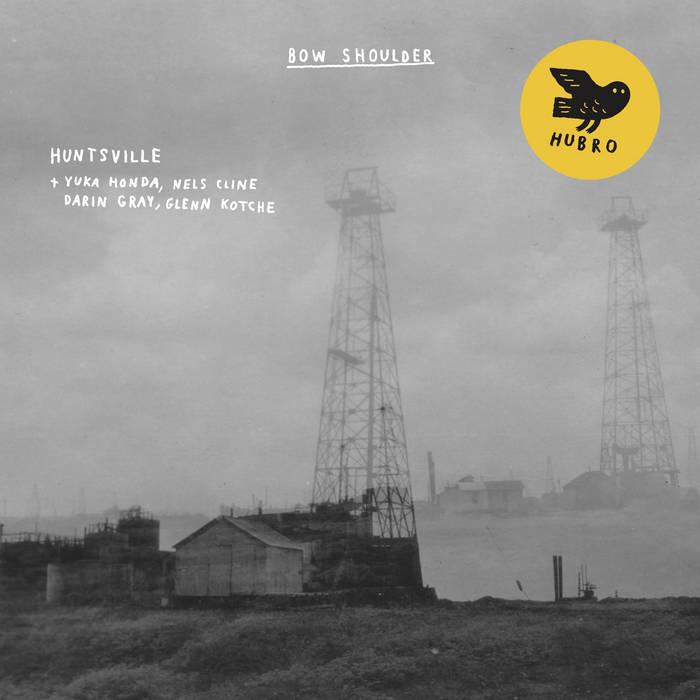