During the winter of 1970, Neil Young and his backing band Crazy Horse embarked upon a short winter tour that included a concert at Filmore East, New York, where the twenty-four year old Canadian folk rocker shared a bill with Steve Miller and Miles Davis. At the end of what was a successful tour Neil Young and Crazy Horse headed to LA and Sunset Sound Studios to begin work on his third album After The Gold Rush.

By the time the sessions began, the health of rhythm guitarist Danny Whitten was already deteriorating. He had bravely battled rheumatoid arthritis and to dull the pain he started using heroin. Soon, he was addicted and this started to affect his performance. However, he played on the sessions at Sunset Sound Studios which yielded two tracks the Neil Young composition I Believe In You and a cover of Don Gibson’s Oh, Lonesome Me.

Sadly, Danny Whitten didn’t play on all of the sessions for After The Gold Rush. After the LA sessions, Neil Young decided to record the album in a makeshift studio in the basement of his home in Topanga Canyon. This he named Redwood Studios and was where he hoped he would complete his third solo album.

This was no ordinary album. Some of songs that Neil Young had written for the album were inspired by Dean Stockwell-Herb Bermann‘s screenplay for the film After The Gold Rush. When Neil Young read the screenplay he had asked Dean Stockwell if he could produce the soundtrack? This resulted in him writing After the Gold Rush and Cripple Creek Ferry.

In the early stages of the sessions Danny Whitten and the rest of Crazy Horse were sacked partly because of the rhythm guitarist’s heavy drug use. By then, he had he had played guitar and added vocals on I Believe In You, Oh, Lonesome Me and When You Dance I Can Really Love. When Danny Whitten left the sessions it looked like his time as a member of Crazy Horse was at an end.

Other musicians were drafted in to augment the new band. This included Bill Peterson who played flugelhorn. Then when Only Love Can Break Your Heart was recorded Steven Stills joined the session and added backing vocals. Later, another familiar face would make a return.

Towards the end of recording of After The Gold Rush Danny Whitten was brought in to provide harmony vocals on Tell Me Why, Only Love Can Break Your Heart, Cripple Creek Ferry, Southern Man and Till The Morning Comes.

By June 1970, the album was complete and Neil Young and has two bands had recorded eleven songs at three studios. The first sessions took place in the winter of 1970 Sunset Sound with further sessions taking place in Sound City Studios in LA and Redwood Studio. The album became After The Gold Rush which was co-produced by Neil Young, David Briggs and Kendall Pacios.

Just three months after completing After The Gold Rush, Reprise released Neil Young’s much-anticipated third album. When It released on the ‘19th’ of September 1970, it wasn’t well received by critics who were far from impressed. This included Langdon Winner who reviewed the album for Rolling Stone. However, Robert Christgau was more enthusiastic in his review in Village Voice. Mostly, though, critics weren’t won over by After The Gold Rush.

When it came to choose a lead single, Only Love Can Break Your Heart was chosen and released on the ’19th’ of October 1970 it reached number thirty-three in the US Billboard 100, and gave Neil Young his first top forty hit.

When You Dance I Can Really Love was released as the followup in March 1971 it stalled at a disappointing ninety-three in the US Billboard 100.

Five years after the release of After The Gold Rush, critics were starting to change their mind about Neil Young’s third album. Some had gone as far as to call the album a masterpiece. It was and still is.

When Neil Young released After The Gold Rush in 1970, it was without doubt the finest album of his solo career. It also set the bar high for the albums that followed during a career that has now spanned six decades. Fifty years later and After The Gold Rush is now regarded as a classic album.

Nowadays, Neil Young is regarded as a musical chameleon who constantly reinvented his music. That’s apparent on After The Gold Rush which was ostensibly an album of country folk music. It opens with the ballad Tell Me Why where he move from the hard rocking sound of Everybody Knows This Is Nowhere towards folk and country sound. His heartfelt pleading vocal is accompanied by two acoustic guitars which is an effective accompaniment on this beautiful ballad.

The title-track After The Gold Rush is best described as a mystical, cinematic ballad. It was written for the end-of-the-world film that never was.

Very different is the heartwrenching ballad Only Love Can Break Your Heart which features backing vocals from Stephen Stills. Graham Nash later claimed that Neil Young wrote the song for him and that it documents the pain and hurt he experienced after splitting up with Joni Mitchell. It’s an oft-covered classic track and one of the highlights of the album.

So is the rocky sounding protest song Southern Man. It features powerful and vivid lyrics where Neil Young sings of the racism towards African-Americans in the Southern states. He tells the story of a white man who mistreated his slaves and poses the questions when will South make amends for the fortunes made through slavery. His lyrics are poignant and powerful as he sings and wonders: I saw cotton and I saw black, tall white mansions and little shacks, Southern Man, when will you pay them back?”

The piano led Till The Morning Comes closed the first side of After The Gold Rush. It’s melancholy and became melodic and rousing as backing vocals enter and transform this short track.

Oh, Lonesome Me is another ballad that epitomises the country folk sound on the album. It features a hurt-filled vocal from Neil Young who sounds as if he’s experienced the heartache and loneliness he’s singing about.

Don’t Let It Bring You Down has a dramatic introduction  which is partly down to Neil Young playing his guitar in double drop C tuning. His impassioned vocal then delivers the emotive and filmic lyrics to another oft-covered ballad from After The Gold Rush.

Nils Lofgren’s piano plays an important part in the sound and success of the album and opens Birds. It’s another heartwrenching ballad about a relationship that’s gone wrong. There’s regret in Neil Young’s voice as he sings “when you see me fly away without you.” Then as the song draws to a close his vocal is tinged with emotion and sadness as he sings: “it’s over, it’s over” as if remembering what they once had.

The tempo rises on the country rocker When You Dance I Can Really Love. It shows another side to Neil Young and his band as they plug in during this optimistic sounding and anthemic love song.

I Believe In You is the most personal song on the album and benefits from an understated arrangement. This allows Neil Young’s impassioned vocal to take centrestage as he reflects. He tries to make sense of the women he’s left and even suggests that he’s unsure if he’ll be able to love and there’s even a reluctance that he will be to enter the new relationship during this powerful, confessional ballad.

Cripple Creek Ferry closes After The Gold Rush and is another short song that was written for the film that never was. Just an acoustic guitar and piano are joined by Neil Young and backing vocals on a song that sounded as if was recorded late at night as the session was drawing to a close. It’s not the most polished  performance on the album but the band sound as if they’re enjoying themselves.

Fifty years have passed since Neil Young released After The Gold Rush which nowadays, is regarded as one of his finest albums and a classic album. It features on all lists of the best albums of all time and belongs in every record collection. That comes as no surprise.

There are no weak tracks on After The Gold Rush which showcases Neil Young’s skills as a songwriter. He wrote ten of the eleven tracks including country folk love songs and his rocky protest song Southern Man. There’s even the two tracks he wrote for the soundtrack to After The Gold Rush. This includes the mystical title track and Cripple Creek Ferry.

However, Neil Young is at his best on the ballads on the album. They’re beautiful sometimes autobiographical or cinematic and are heartwrenching and  tug at the heartstrings. One of the finest ballads was I Believe In You which was the nearest that he came to writing an MOR ballad. Just like Only Love Can Break Your Heart it’s a timeless and oft-covered track.

For newcomers to Neil Young, his classic album After The Gold The Rush which was released fifty years ago in 1970 is the perfect place to start. After this, albums like Harvest, Tonight’s The Night, On The Beach, Rust Never Sleeps, Freedom and Harvest Moon are among the finest of the forty albums that Neil Young has released so far, during a career that has already spanned six sparkling decades. 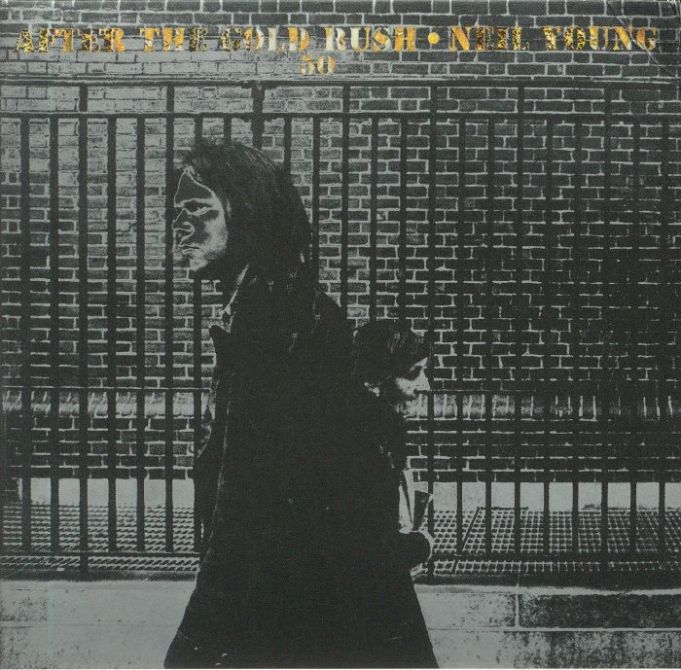