Philadelphia International Records’ house band was MFSB, while Motown the Funk Brothers and Fame Records had the Muscle Shoals Rhythm Section between 1961 and 1969. These three house bands played an important part in each label’s sound and success. That was also the case with  the Tabansi Studio Band.

They helped shape the sound  of Tabansi Records.and played their part in the the success of  the most important, influential and innovative Nigerian record label of the past six decades. However, just like MFSB, the Tabansi Studio Band weren’t just content to be a studio band and released several albums. This included Wakar Alhazai Kano and Mus’en Sofoa which were released by Tabansi Records during their golden period.

Tabansi Records was founded in Nigeria in 1952, and filled a void when major labels like Decca and later, Philips closed the doors on their Nigerian operations.

Chief Tabansi, who lent his name to what would become Nigeria’s most important label, recorded artists and then pressed the records at The United African Company’s pressing plant. After that, record vans promoted the latest releases in Nigerian villages. This was just the start for Tabansi Records.

During the seventies, Tabansi Records was the most successful Nigerian label, and its founder Chief Tabansi was one of the leading light’s of country’s thriving and vibrant music scene. He had invested in the company he had founded in, in Onitsha, Lagos, all these years ago, which by the seventies, had its own studios and pressing plant. Tabansi Records was going from strength-to-strength.

Playing their part in the success of the label by the late seventies was the Tabansi Studio Band. They featured on the majority of the albums released by Tabansi Records. That was only part of the story,

Unlike studio bands like the Wrecking Crew and the Funk Brothers, the Tabansi Studio Band wanted to follow in the footsteps of the MFSB and embark upon a recording career. In 1979, they recorded their first two albums  Wakar Alhazai Kano and Mus’en Sofoa, which nowadays, are real rarities that are prized by collectors.

One listen to Alhazai Kano and Mus’en Sofoa was all it took to realise that these were two extremely important albums in the history of Tabansi Records. Each album features just two tracks of glorious improvised music where the Tabansi Studio Band lock into a groove as they combine disparate genres on these two long lost hidden gems.

Wakar Alhazai Kano is an album of Hausan Afrobeat which is a rarely heard style of music. Playing their part in the sound and success of Alhazai Kano are the seven Martins brothers. They  were all talented multi-instrumentalists who were part of the Tabansi Studio Band and accompanied the multilingual vocalist Professor Goddy-Ezike.

He’s regarded as one of the greatest African vocalists of his generation and deserves to be spoken about in the same breath as Salif Keita and Youssou N’Dour.  Professor Godwin-Ezike is always impassioned and veers between  mordant and trenchant as he delivers the vocals. His style is very different to the likes of Fela Kuti’s Yoruba-Pidgen Afrobeat. The combination of Professor Goddy-Ezike and the Martins brothers is a potent one.

The genre-melting Wakar Alhazai Kano opens that album and just like Lokoci Azumi Ta Wuca has been influenced by Northern Hausa music. Throughout the album, which is in 6/8 time, the Martins brothers fuse  elements of Islamic music,  Hausa pop, Libyan Tuareg music, traditional folk, court and Andean music as well as Bollywood and reggae. Against this genre-melting backdrop that comes courtesy of the Martins brothers Professor Goddy-Ezike delivers what can only be described as an impassioned and emotive vocal masterclass on this much prized Afrobeat rarity.

On Mus’en Sofoa, the tracks  Kama Sofos and Aka Ji Ego Ga Anu Nwam are both sung in Igbo. This doesn’t present a problem to the multilingual vocalist Professor Goddy-Ezike. He combines with the Martins brothers to create two tracks in 4/4 time which feature elements of jazz, funk and soul. They play a myriad of traditional percussion which allows them Martins brothers the opportunity to improvise and take the tracks in what may seem unexpected directions as they showcase their considerable skills.

For anyone with even a passing interest in Afrobeat, the Tabansi Studio Band’s first two albums,  Wakar Alhazai Kano and Mus’en Sofoa are essential listening. These two albums feature two very different and rarely heard styles of Afrobeat. 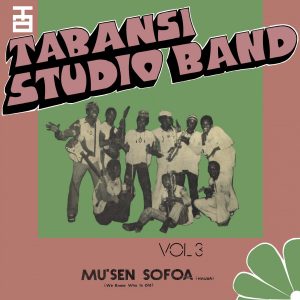