When Eddie Harris released The In Sound on Atlantic Records in late 1965, the Chicago born jazz saxophonist was thirty-four, and had already established a reputation as a versatile, inventive and innovative musician. That was despite only releasing his debut album Exodus To Jazz on Vee-Jay  Records in 1961. It featured Exodus which have Eddie Harris his first hit single and helped launch his career. The next four years were a roller coaster ride for Eddie Harris. However, his story began in the Windy City in 1934.

Eddie Harris was born in Chicago on October the ’20th’ 1934. His father was Cuban and his mother was originally from Mississippi. The Harris family had settled in  Chicago, and when Eddie Harris was just three his cousin, Bernice Benson, who played piano at the church his mother attended began teaching him how to play the piano. Initially, he learned to play by ear and later, learned to read music.

By then, Eddie Harris had started his career as a singer and was singing in baptist churches around Chicago. He was a student at DuSable High School, where he  studied music under Captain Walter Dyett who also taught Clifford Jordan, Dinah Washington, Gene Ammons and Nat King Cole. When he graduated high school, Eddie Harris could play clarinet, organ, piano, saxophone and vibes and knew he wanted to make a career out of music.

Having graduated high school Eddie Harris enrolled at the Roosevelt University where he studied music. That was where he met Gene Ammons and although still students, the pair played professionally together. By then, Eddie Harris who was already a talented tenor saxophonist could also play organ, piano and vibes. He would put this versatility to use later in his career.

After graduating from Roosevelt University Eddie Harris was drafted and served in the United States Army.  It was while he was serving in Europe, that he was accepted into the 7th Army Band, which at the time also included Cedar Walton, Don Ellis and Leo Wright. This was the next part of Eddie Harris’ musical education.

When Eddie Harris left the United States Army he headed first for New York, but then decided to return home to Chicago where he signed to Vee-Jay Records.

In 1961, Eddie Harris released debut album Exodus To Jazz to critical acclaim. It was an album of bop and soul jazz that featured original material and cover versions that were snappy yet swang. This included Ernest Gold’s theme from the movie Exodus which was given a jazzy makeover. When an edited version was released as a single it entered the US Billboard 100, reached sixteen in the US R&B charts and was certified gold. This launched Eddie Harris career.

He returned later in 1961 with Mighty Like A Rose, which was another album of bop and soul jazz. It was released to plaudits and praise but wasn’t as successful as Exodus To Jazz. However, Eddie Harris was regarded as one of jazz’s rising stars.

Critics were just as impressed with his third album Jazz For “Breakfast At Tiffany’s.” It was a jazz interpretation of Henry Mancini’s score for Breakfast at Tiffany’s and was released later in 1961. In the first year of his recording career, Eddie Harris had already released three albums.

When he returned in 1962 with his fourth album A Study In Jazz, it was the first to feature some of Eddie Harris’ own compositions. Critics and record buyers were won over by this talented, up-and-coming composer.

Quite different was the other album Eddie Harris released during 1962. This was his fifth album Eddie Harris Goes To The Movies, which was released later in 1962 found him accompanied by an orchestra conducted by Dick Marx. String drenched arrangements provided an accompaniment for Eddie Harris’ tenor saxophone as he covered many popular film themes. The result was an album of sensuous mood music that at times veered towards easy listening.

Eddie Harris returned to the studio in November 1962, and recorded the album Bossa Nova. It featured six compositions including three that Lalo Schifrin had written early in his career. Eddie Harris wrote Lolita Marie, which was part of what critics called his finest albums and a return to form when it was released in 1963. This he followed with Half and Half which was his Vee-Jay Records swansong.

In 1964, Eddie Harris signed to Columbia Records, and later that year, released Cool Sax, Warm Heart. The album wasn’t well received and critics said it wasn’t as strong as some of the albums he had released for Vee-Jay Records. This wasn’t the best way for Eddie Harris to begin life at Columbia Records.

Things didn’t get much better when he returned later in 1964 with Here Comes The Judge. While the reviews were slightly better than Cool Sax, Warm Heart, it seemed that Eddie Harris wasn’t making progress at Columbia Records. Maybe it was the wrong label for him?

Some critics thought that was the case when Eddie Harris released Cool Sax From Hollywood To Broadway in 1965. Just like his two previous albums, it was an average album that disappointed critics and his fans. It wasn’t one of Eddie Harris’ finest recordings, and it looked like his career was at a crossroads.

The next album that Eddie Harris released on Columbia Records was one of the most important of his career. He had released three disappointing albums since signing to the label, and needed to record an album that would transform his fortunes. Executives at Columbia Records also realised this, and Nesuhi Ertegun replaced Tom Scott as producer when recording of The In Sound began.

For the recording of The In Sound, Eddie Harris had written Cryin’ Blues and Freedom Jazz Dance which was recorded by Miles Davis in 1966 and became a jazz standard. The other four tracks were cover versions including Johnny Mandel and Paul Francis Webster’s Love Theme From The Sandpiper (The Shadow Of Your Smile); Mel Tormé and Robert Wells’ Born To Be Blue; Cole Porter’s Love For Sale plus George and Ira Gershwin’s ‘S Wonderful. These tracks were recorded  by Eddie Harris’ quintet.

The two sessions took place on August the ‘9th’ and the ’30th’ 1965 and featured a rhythm section of drummer Billy Higgins; bassist Ron Carter and pianist Cedar Walton. Trumpeter Ray Codrington and Eddie Harris made up the front line and Nesuhi Ertegun took charge of production. Once the album was completed, The In Sound was released later in 1965.

Critics were won over by The In Sound a stunning album of bop that marked a return to form on what was called one of the finest albums of Eddie Harris’ career. He was back with what’s nowadays regarded as one of his greatest albums.

That is apparent from the opening bars of Love Theme From The Sandpiper (The Shadow Of Your Smile). It’s one of the earliest versions and is slow, laid-back and mellow sounding as Eddie Harris and his band explore the song’s subtleties and nuances. Pianist Cedar Walton plays a starring role and then Eddie Harris who plays with power and passion but is always in control during what’s now regarded as a classic.

Born To Be Blue conjures up images of a smokey jazz club in the mid-sixties late at night. With its  wistful, rueful and ruminative sound it encourages reflection, and is the perfect soundtrack for those who have loved and lost.

Very different is Love For Sale where Eddie Harris and his band romp their way through the track. It’s a similar case on a joyous and swinging version of the standard ‘S Wonderful.

Closing The In Sound is Freedom Jazz Dance where Eddie Harris explores and investigates what were then the latest developments in jazz. The result was a much more innovative sounding track. It was very different to what Eddie Harris had recorded for Columbia Records. Initially, it’s a piano blues for the first sixteen bars. Later, there’s a nod to Ornette Coleman during the melody. Then when the solos come around the front line come into their own and trumpeter Ray Codrington and tenor saxophonist Eddie Harris take charge against a pulsating arrangement. They play their part in what became a jazz classic which was recorded by Miles Davis in 1966.

After three disappointing albums for Columbia Records Eddie Harris returned with The In Sound. This prodigiously talented multi-instrumentalist was back with one of the finest albums of his short recording career and critics called him the comeback king.

Ironically, they had been wondering what had happened to Eddie Harris  since signing to Columbia Records? He had gotten his career back on track with The In Sound, which nowadays is regarded as one of the finest albums from a versatile, inventive and innovative musician. Seamlessly he switches between melancholy ballads before romping through much-loved standards on The In Sound. It’s one of the finest moments in Eddie Harris long and distinguished career and The In Sound is the perfect introduction to Eddie Harris and a reminder of a jazz great at his creative zenith. 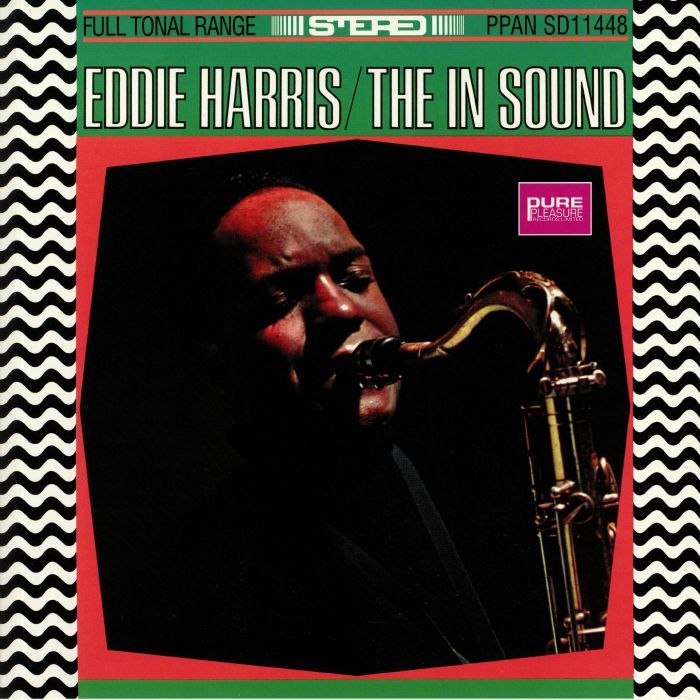