Little did anyone at Jazzman Records know when they released Spiritual Jazz (Esoteric, Modal and Deep Jazz From The Underground 1968-77) in 2008, that this was the first instalment in what would become their longest-running and most successful compilation series. Over the next thirteen years, they’ve released compilations of European, Islamic, Japanese and vocal spiritual jazz. They also turned their attention to some of the most important and prestigious jazz labels and dug deep into the vaults of Blue Note, Prestige and most recently Steeplechase and Implulse! for further critically acclaimed compilations of spiritual jazz. By then, there were twelve instalments in the series.

The big question on many critics and jazz fans lips was what was next for the Spiritual Jazz label? Were Jazzman Records about to turn their attention to another of jazz’s classic labels?

Opening Spiritual Jazz 13: Now! Part One is Benjamin Herman’s Lizard Waltz which is taken from his album Bughouse, which was released in 2018 on Dox Records. The soprano saxophonist has released over twenty albums and Lizard King has a wonderfully wistful  and reflective sound. It’s the perfect introduction to a truly talent and prolific composer and musician.

In 2018, Idris Ackamoor and The Pyramids released their critically acclaimed album An Angel Fell on Strut. One of the highlights was the title-track which is an innovative and progressive track that fuses Afro-funk, electronica and jazz with lyrics that combine beauty and symbolism.

Nowadays, saxophonist Nat Birchall is regarded as a veteran of the British jazz scene and has been a familiar face for over thirty years. Nine years ago, he released his album A World Without Words. It featured The Black Ark where his emotive and fervid playing sounds as if it’s been inspired by classic John Coltrane and features some impressive improvisation. Playing an important part in the sound and success of a track named after Lee Perry’s studio is the rhythm section and vibes. They’re play their part in one of the highlights of the compilation.

British flautist Chip Wickham released the album Shamal Wind on Lovemonk in 2018. One of the highlights of the album was the title-track where Eastern influences and sounds accompany the bandleader whose playing veers is variously  inventive, heartfelt, impassioned, restrained and melancholy during a truly beautiful track.

Finnish saxophonist Jimi Tenor and Kabukabu  recorded Suite Meets for the 2012 album The Mystery Of Aether which was released on the Kindred Spirits label. This track is a slow burner that gradually builds and so does the intensity as jazz and funk combine as they seek inspiration and pay homage to jazz greats including Sun Ra, Pharaoh Sanders Duke Ellington before the track reaches its impressive finale.

In 2014, Antwerp-based Ethio-jazz band Black Flower released the album Abyssinia Afterlife on Zephyrus Records. It featured the genre-melting track Flower which is impressive and memorable mixture of dub, Ethio- jazz and fusion.

In 2017,  Darryl Yokley’s Sound Reformation released their debut album Pictures At An African Exhibition which  featured Echoes Of Ancient Sahara. It features Afro-Arabic influences and is an ambitious, intricate and multilayered nine-minute opus that for many people will be the first time they’ve heard the American saxophonist’s music.

Damon Locks Black Monument Ensemble are based in the Windy City and Sounds Like Now is taken from their 2018 live album Where Future Unfolds. It’s a track with lyrics full of social comment which fuses elements of African music with jazz and soul and there’s even a nod to the legendary Art Ensemble Of Chicago.

When Finnish flautist Oiro Pena released his eponymous album in 2019 it featured  Nimeto. It’s a ruminative sounding track that encourages reflection as the saxophone provides the perfect accompaniment to the flute.

Cat Toren’s Human Kind released their eponymous debut album on Green Ideas Records in 2017. One of the highlights of the album was the spiritual and contemplative sounding track Soul. It’s a tantalising taste of the New York-based bandleader, composer and pianist whose career has already spanned two decades.

In 2016, Shabaka and The Ancestors released their debut album Wisdom Of Elders on Brownswood Recordings. It’s another genre-melting track where African influences, folk, gospel and jazz are combined  during what’s an impassioned performance.

Closing Spiritual Jazz 13: Now! Part One is Makaya McCraven’s Gnawa which is a track from his live album In The Moment which was released in 2015. It’s an innovative sounding and sometimes mesmeric track where mechanical and metallic sounds combine with phrases fired from from Junius Paul’s  double bass. The result is a bewitching and joyous track that’s the perfect way to close the compilation.

This is only the end of Spiritual Jazz 13: Now! Part One and Part Two is still to come. This latest instalment in the series is quite different to the previous ones which looked at some of jazz’s iconic labels including Blue Note, Prestige and most recently Steeplechase and Impulse! Other volumes turned their attention to  Islamic and J-Jazz from yesteryear. However, it was only a matter of time before Jazzman Records turned their attention to the present day.

Spiritual Jazz 13: Now! Part One shows that jazz in its various forms is in a  healthy state. There’s currently many talented jazz musicians in Africa, America, Britain and Europe. Proof of this can be found on Spiritual Jazz 13: Now! Part One which features ambitious, innovative and memorable music from the current crop of musicians who fuse disparate genres and sometimes, draw inspiration from jazz’s past and in doing so, play their part in a welcome addition to this long-running and successful series 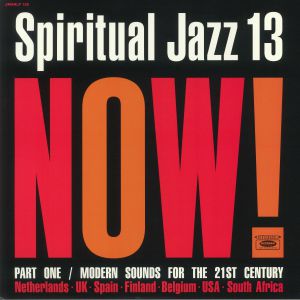