By the time Herbie Hancock signed to Blue Note Records, the Chicago-born pianist was just twenty-two, and had already worked with Donald Byrd and Coleman Hawkins.

On May the ‘28th’ 1962, he recorded his debut solo album Takin’ Off which featured the jazz standard Watermelon Man. The album was released to widespread critical acclaim later in 1962. This was the start of productive period that saw Herbie Hancock release seven studio albums for Blue Note Records between 1962 and 1969.

This includes his sophomore album My Point Of View, which featured was the first recording by his classic hard bop small group. This landmark album has just been reissued by Blue Note Records on 180 gram vinyl as part of their Tone Poet Series. It’s a reminder of one of the greatest jazz pianists of his generation as he embarks upon a long and illustrious career.

Herbert Jeffrey Hancock was born in Chicago on April the ’12th’ 1940. His father Wayman Edward Hancock was a government meat inspector and his mother Winnie worked as a secretary. They named their son after the singer and actor Herb Jeffries. This was fitting as the new addition to their family turned out to be prodigiously talented musician.

Growing up,  Herbie Hancock like many other jazz pianists studied classical music. His talent was soon spotted and teachers realised that he was a child prodigy.

Aged just eleven, Herbie Hancock played the first movement of Mozart’s Piano Concerto No. 26 in D Major at a young people’s concert on February the ‘5th’ 1952 with the Chicago Symphony Orchestra which was led by assistant conductor George Schick. The young pianist was one of the stars of concert.

As a teenager, Herbie Hancock attended Hyde Park High School on the South Side of Chicago.  Despite eventually making a career as a jazz pianist, he never had a jazz teacher during his teenage years. However, he spent time developing his ear and a sense of harmony. One of his musical influences were The Hi-Lo’s a vocal quartet who sometimes supported Frank Sinatra.

After graduating from Hyde Park High School, Herbie Hancock enrolled at Grinnell College and graduated in 1960 with degrees in electrical engineering and music.

In 1960, Herbie Hancock heard Chicago-born jazz pianist Chris Anderson play and was so impressed that he asked him to accept him as a student. He agreed and was a huge influence on the young pianist who later, called him his “harmonic guru.”

After graduating from Grinnell College, Herbie Hancock returned to the Windy City and began working with Donald Byrd and Coleman Hawkins. During this time, he enrolled in courses at the Roosevelt University, in Chicago.

During 1960, Donald Byrd was studying at the Manhattan School of Music and he suggested that Herbie Hancock studied composition with Vittorio Giannini. This he did briefly, but by then, Herbie Hancock’s star was in the ascendancy and he was invited  to play on sessions Oliver Nelson and Phil Woods.

Just two years later, in 1962, Herbie Hancock signed to one of jazz’s premier labels, Blue Note Records. This would be his home for the next seven years.

Having signed to Blue Note Records, Herbie Hancock began work on his debut album, Takin’ Off. He wrote six new compositions including Watermelon Man which were recorded at on May the ‘28th’ 1962, at Van Gelder Studio, Englewood Cliffs, New Jersey and produced by Alfred Lion.

Joining pianist Herbie Hancock in the rhythm section were drummer Billy Higgins and double bassist Butch Warren. The front line featured trumpeter Freddie Hubbard and tenor saxophonist. It was an all-star band that was accompanied Herbie Hancock on an album that was produced by Alfred Lion and engineered by Rudy Van Gelder.

Later in 1962, Takin’ Off was released to widespread critical acclaim. It was an album of cerebral music that was light, tight,  bluesy, funky, imaginative and sometimes ruminative. Always the music was memorable on this album of hard bop and soul-jazz. The standout track was Watermelon Man with Three Bags Full, Empty Pockets and Alone and I receiving honourable mentions. Takin’ Off had launched Herbie Hancock’s career which was well underway, and has since been hailed as one of the most accomplished debut albums in the history of jazz. 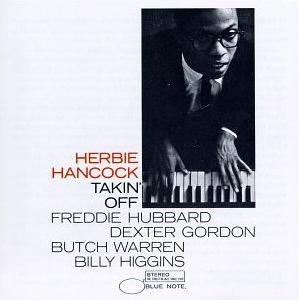 My Point Of View.

Buoyed by the critical response to his debut album Takin’ Off, Herbie Hancock began work on his much-anticipated sophomore album My Point Of View. He wrote five new compositions Blind Man, Blind Man, A Tribute To Someone, King Cobra, The Pleasure Is Mine and the album closer And What If I Don’t. These tracks were recorded by Herbie Hancock’s classic hard bop small group.

My Point Of View was released in the autumn of 1963, to plaudits and praise. Herbie Hancock wasn’t content to stand still and began to push the boundaries of hard bop on his sophomore album. Especially on A Tribute To Someone which is a nine minute epic that sometimes can be challenging a listen but is ultimately rewarding. Very different is the beautiful ballad The Pleasure Is Mine which is one of the album’s highlights.

Then King Cobra heads in the direction of modal jazz. It has a silty edgy sound and there’s similarities to one of Herbie Hancock’s most famous compositions, Maiden Voyage. The seeds to that jazz classic were sown here.

Bookending My Point Of View are the two tracks with a much more pronounced soul-jazz sound. This came courtesy of guitarist Grant Green who plays a starring role on the both tracks. The album opener Blind Man, Blind Man was a track that Herbie Hancock later said reminded him of a  blind man who stood on the corner playing his guitar in the neighbourhood of Chicago he grew-up in. It’s also a track that owes a debt of gratitude to one of his classic tracks,Watermelon And What If I Don’t bookends the album and has a laidback, bluesy groove that’s the perfect way to close Herbie Hancock’s sophomore album My Point Of View.

Nowadays, Takin’ Off is regarded as one of the finest debut albums by a jazz artist. Herbie Hancock had set the bar high. However, the twenty-three year old pianist returned with a stunning sophomore album My Point Of View. The album’s  foundation is hard bop but there’s also soul-jazz and modal jazz as well as elements of blues and funk. Herbie Hancock was determined to reinvent hard bop and take it in a new direction. He was a musical pioneer who was determined never to stand still musically.

Not long after Herbie Hancock recorded My Point Of View, he was invited to join what became Miles Davis’ Second Great Quintet which also featured drummer Tony Williams. Herbie Hancock had come a long way in a short space of time.

He had only released his debut album Takin’ Off in the autumn of 1962, with My Point Of View following a year later  in 1963 which nowadays is regarded as a jazz classic. This was just the start of a period when Herbie Hancock could do no wrong with

This was something he continued to do throughout his time at Blue Note Records releasing Inventions and Dimensions in early 1964 with Empyrean Isles following in November 1964; Maiden Voyage in March 1965 and Speak Like A Child in the summer of 1968. Bringing the Blue Note Records Years to a close in 1969 was one of Herbie Hancock’s most ambitious and innovative albums, The Prisoner, which was produced by Duke Pearson and dedicated to the memory of the late Dr Martin Luther King. The seven studio albums that Herbie Hancock released on Blue Note Records are among his finest albums and are the perfect introduction to one of the greatest jazz pianists of his generation. 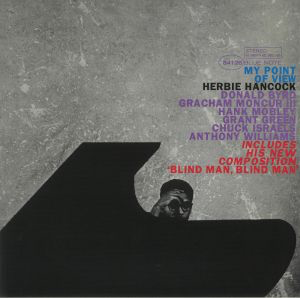