Progressive brass rock pioneers Brainchild were formed in Somerset in the late-sixties, and by the 1970 the septet had signed to A&M. This was perfect timing as the brass rock boom began in 1969 and continued until 1972. By then,  Chicago, Blood, Sweat and Tears and The Electric Flag were amongst the highest profile brass rock bands stateside. However, it wasn’t just an American phenomenon.

In Britain, a number of brass rock bands were making waves. However, Brainchild were different to the rest as they combined progressive rock and brass rock. It was impressive sight and sound as the septet took the stage and like well oiled machine worked their way through their set. As they did, the audience realised that here was a band that was a cut above the competition.

Not many bands could seamlessly switch between time signatures and combine disparate musical genres like Brainchild. They took as a starting point progressive brass rock and incorporated elements of fusion, funk, psychedelia, pop, rock and blues. Their music was quite different to the majority of the bands playing live in 1970 and it was no wonder they had been signed by A&M and were en route to the studio to record their debut album Healing Of The Lunatic Owl.

Brainchild’s detonation was Wessex Sound Studios in West London, where they were about to record their debut album with producer Lennie Wright who had been a member of The Web.

Three of the members of the group had written the eight tracks they were about to record. Bill Edwards contributions were Autobiography and Two Bad Days, while Brian Wilshaw had penned Healing Of The Lunatic Owl, Hide From The Dawn and To “B”. Harvey Coles had also written three tracks, She’s Learning, A Time A Place and Sadness Of A Moment. These eight tracks were about to be recorded by Brainchild and would be their debut album Healing Of The Lunatic Owl.

With Healing Of The Lunatic Owl completed, A&M scheduled the release of Brainchild’s debut album for later in 1970. By then, the popularity of both progressive rock and brass rock were growing. Marketing executives at A&M must have thought that this was the perfect time to release an album of progressive rock brass rock. Sadly, that wasn’t the case when Healing Of The Lunatic Owl was released the album sunk without trace. It must have been hugely disappointing for a group as talented and versatile as Brainchild. Sadly, record buyers weren’t ready for their unique take on progressive brass rock. Maybe the album was ahead of its time?

Brainchild had incorporated elements of fusion, funk, psychedelia, blues, rock, poppy hooks and theatre into progressive brass rock during Healing Of The Lunatic Owl. Lead vocalist Bill Edwards is responsible for the poppy hooks and the slight theatrical sound. There’s a lounge influence on the title-track where Brainchild combine jazz, rock and seem to have been inspired by Chicago and Blood, Sweat and Tears. It’s one of the highlights of the album. So is the nine minute epic A Time A Place which is Brainchild’s finest moment.

Sometimes, the album heads in the direction of psych-prog and even Krautrock which was in its infancy in 1970. Later in the album dissonant horns on To B take the album in the direction of free jazz. However, the structure of the songs are unmistakably progressive rock and seamlessly Brainchild spring a surprise with unexpected changes in time signature. Add to that the psychedelic influence and Healing Of The Lunatic Owl was an album with the past, the present and the future.

Playing an important role is Harvey Coles’ elastic and probing bass which takes the album in the direction of progressive funk. The progressive funkateer forms a potent partnership with drummer Dave Muller in the rhythm section. Given their versatility they’re one of Brainchild’s secret weapons.

Despite the undeniable quality of Healing Of The Lunatic Owl it is one of the many albums released in the early seventies that failed to find the audience it deserved. It was an ambitious and innovative album where Brainchild took progressive brass rock in a new direction. They were musical pioneers who rather than follow in the footsteps of others, decided to forge a new sound. Sadly, Healing Of The Lunatic Owl was ahead of its time and passed the record buying public by in 1970.

This was hugely disappointing for Brainchild who split-up not long after releasing their debut album. Sadly, by then the dream was over for Brainchild. Healing Of The Lunatic Owl was Brainchild’s one shot at the title and for this groundbreaking group and sadly, it was a case of what might have been? 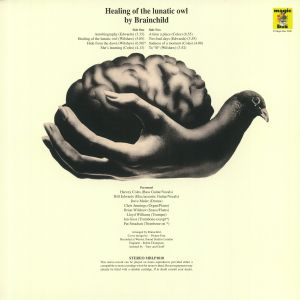