On September the ‘30th’ 1970 Canadian singer-songwriter Neil Young released his critically acclaimed third album After The Gold Rush. It was hailed as the finest album of his solo career and nowadays, is regarded as a classic.

After the release of After The Gold Rush, Neil Young headed out on tour to promote the album. By January the ’19th’ 1971 he had arrived in Toronto where he was due to play a solo, acoustic set at the Massey Hall. That night, the tapes were running and the concert was recorded with a view to releasing a live album.

Sadly, the recording lay unreleased in Neil Young’s archives until 2007 when it was belatedly released as Live At Massey Hall 1971. It reached number six on the US Billboard 200 chart and is one of Neil Young’s finest live albums. However, this wasn’t the only live album recorded during the tour. 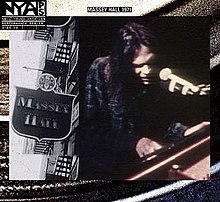 Three nights after the Massey Hall concert the tapes were running again.The venue was The Shakespeare Theater, in Stratford, Connecticut, and when Neil Young took to the stage  January the ’22nd’ 1971 the show was filmed and recorded.

Later in 1971, the concert film was shown on German television. However, the recording lay in Neil Young’s vaults for nearly fifty years.

It wasn’t until 2020 when Neil Young was working with his team and reviewing tapes in his Archive for future projects. That was when they found the 16mm film and the recording of  the concert at The Shakespearee Theater which had been persevered for almost have a century. It  was a remarkable find.

When Neil Young and his team watched the film and listened to the recording. Gradually, they were able to piece together the film footage and the tapes of the concert. Soon, they realised that they had the entire concert. This was a historic find as the film features the earliest live footage of Neil Young as a solo artist live in concert.

The tapes were carefully and lovingly restored to their former glory. When Neil Young heard the Young Shakespeare tapes he said his performance was: “superior to our beloved Massey Hall” concert. That’s no surprise to anyone who has heard both albums.

He gives a calmer performance and is much more measured and assured during the twelve song set that eventually became Young Shakespeare. Gone is the celebratory atmosphere that can he heard on Live At Massey Hall 1971. The result is a much better album and a reminder of one of the great, young singer-songwriters who in January 1971, was enjoying a prolific period  when he recorded Young Shakespeare.

Three months earlier Neil Young had released After The Goldrush which would eventually be certified double platinum in the UK and America. He had started writing and recording his second classic album Harvest, and showcases four tracks from the album on Young Shakespeare which was  recently released by Warner on CD.

When Neil Young took to the stage at The Shakespeare Theater he was just twenty-five but was already a gifted and celebrated songsmith. That night, he delivered vocals that were impassioned, heartfelt and emotive as he works his way through an acoustic set that features old favourites and classic songs.

Opening Young Shakespeare was Tell Me Why which also opened After The Gold Rush. Neil Young’s vocal is full of emotion as he asks the question and but is left wondering? Its a powerful way to open the set.

He then played a couple of tracks from his next album, Harvest. up was an impassioned reading of Old Man which become a staple of his concerts for years to come. So would The Needle and The Damage Done where Neil Young describes the effects of heroin addiction.

After this, he played Ohio which was released by Crosby, Stills, Nash and Young in 1970 and nowadays is regarded as a classic. It’s a powerful track full of social comment.

Very different is Dance, Dance, Dance which Neil Young wrote and was originally covered by Crazy Horse on their 1971 eponymous debut album. This solo acoustic version is very different from the original and shows a different side to what would often feature in the setlist.

Neil Young then return to his sophomore album Everybody Knows This Is Nowhere which was released in May 1969 and delivers a tender, wistful version of Cowgirl In The Sand.

It’s followed by a medley of A Man Needs A Maid and Heart Of Gold from Harvest. It would go on to top the US Billboard 200 when it was released and eventually sold over four millions copies. This resulted in the album being certified four times platinum. Those in the audience at The Shakespeare Theater were fortunate to hear two more tracks from Neil Young’s next classic album.

He then played the title-track to his soundtrack to Journey Through The Past which was released in November 1972. This was the first of four soundtrack albums that Neil Young released between 1972 and 2018.

After this, he returns to After The Goldrush for Don’t Let It Bring You Down which also featured on Crosby, Stills, Nash and Young’s 1971 live album 4 Way Cellar. It’s a quite beautiful, impassioned reading on Young Shakespeare.

It gives way to Helpless which featured on Crosby, Stills, Nash and Young’s 1970 album Deja Vu. Neil Young wrote the song and he delivers an emotive vocal as he brings the lyrics to the life accompanied by a lone acoustic guitar.

Down By The River was the penultimate song of the set and  was one of the highlights of Everybody Knows This Is Nowhere. Since he wrote the song, Neil Young has given various explanations of the lyrics. This includes that they’re about a man who shot his lover after feeling unable to continue from the emotional highs of their relationship. When he played the song in New Orleans on September the ‘27th’ 1984 Neil Young told the audience that it was about a man who had trouble controlling himself, and when he discovered his lover had been cheating on him, he met her down by the river and shot her. It’s a dark cinematic song and very few people know the backstory to the lyrics.

Closing the set and Young Shakespeare was Sugar Mountain which Neil Young penned on his nineteenth birthday. The song made its debut on the B-Side of his debut solo single The Loner. Just two years later and he was well on his way to becoming one of the most successful solo artists not just of the seventies, but the last fifty years.

Just over fifty years after Neil Young played at The Shakespeare Theater, in Stratford, Connecticut, this beautiful acoustic solo concert was belatedly released as Young Shakespeare by Warner. It’s one of the finest live albums that Neil Young released, and there’s been plenty to choose from since 1973.

His first live album was Time Fades Away which was released in 1973, and 1979s Live Rush where Neil Young is accompanied by Crazy Horse. This was followed by Weld in 1991 and two years later in 1993 he released his Unplugged album. Just like Young Shakespeare, these albums show different sides to Neil Young’s music.

During a long and illustrious solo career that’s spanned fifty-three years Neil Young has been a musical chameleon constantly reinventing his music. It’s if he’s frightened to stand still in case he’s accused of becoming irrelevant. Instead, he strives to reinvent himself. That’s why so many of the thirty-nine solo albums and the live albums that Neil Young has released are so different.

However, Young Shakespeare is a reminder of Neil Young singer-songwriter in the early stages of his solo career. He switches between acoustic guitar and piano during Young Shakespeare where the songs are beautiful, powerful and poignant and his  delivery is heartfelt, impassioned and emotive as he works his way through a twelve song set that features future classics and others that would become a staple of Neil Young’s concerts over the next fifty years. 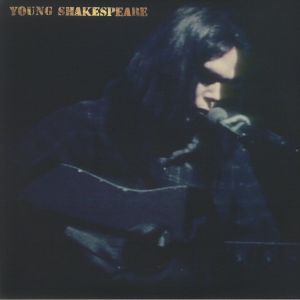