By June 1968, Atlanta-born pianist Duke Pearson was thirty-five, and was about to begin record the twelfth album of his career, The Phantom. It would be the seventh album he had recorded for Blue Note Records since he first signed for the label in 1959, and later that year, had released his debut Profile.

Duke Pearson’s time at Blue Note Records was the most productive of his recording career. He signed to what was jazz’s premier label in 1959, and later that year, released his debut album Profile. Tender Eyes followed in 1960 and was his second album for Blue Note Records which he called home for most of his career.

In 1961, Duke Pearson signed to Polydor and recorded his third album Angel Eyes. However, it wasn’t released until 1968. By then, much had happened to Duke Pearson.

Next stop was Prestige where later in 1961 he recorded Dedication! Just like Angel Eyes, there was a delay in releasing the album and it wasn’t until 1970 that it was belatedly released.

On January the ‘12th’ 1962, The Duke Pearson Quintet recorded an album for the short-lived Jazztime label. This was Hush! which was released to critical acclaim later in 1961. Two years later Duke Pearson returned home to Blue Note Records.

He made the journey to Van Gelder Studio, in Englewood Cliffs, New Jersey, on the ‘21st’ of November 1964 and recorded what was the most ambitious album of his career. Wahoo featured Duke Pearson at his creative zenith on what was one of best and most sophisticated albums of hard bop released during the mid-sixties. When it was released just before the end of 1964, it was hailed as the finest of Duke Pearson’s career.

After releasing his critically acclaimed album Wahoo, Duke Pearson signed to Atlantic Records and recorded two albums during 1965. This included The Duke Pearson Nonet’s album Honeybuns whig was recorded on May the ‘25th’ and ’26th’ 1965 and was well received when it was released in 1966.

For his second album for Atlantic Records Duke Pearson was joined by an all-star band as he recorded what was an album of blues-tinged soul-jazz that ventures into hard bop. Just like its predecessor, reviews of Prairie Dog were positive. Despite that, Duke Pearson left Atlantic Records and once again returned to Blue Note Records.

This time it was for good, and Duke Pearson would call Blue Note Records home for the remainder of his recording career signed to the label. This began with Sweet Honey Bee which featured six Duke Pearson compositions and Big Bertha which he cowrote with Memphis Slim.

Joining Duke Pearson was all-star band that recorded Sweet Honey Bee at Van Gelder Studio on December the ‘7th’ 1966. They were responsible for a series of musical masterclasses on what was hailed as one of the finest albums of Duke Pearson’s career as he combined hard bop, post bop and soul jazz. It was released in 1967 and marked his return to the Blue Note Records’ fold. 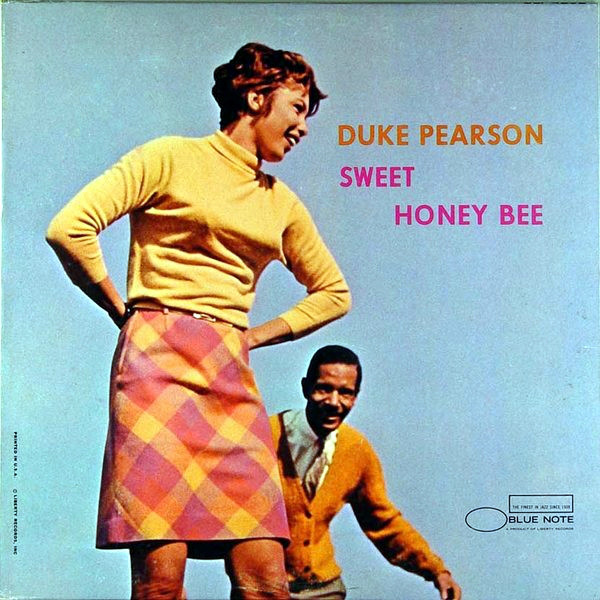 Buoyed by the success of Sweet Honey Bee, Duke Pearson and his band recorded the followup The Right Touch on September the ’13th’ 1967. He had written the six tracks that were recorded at Van Gelder Studio by his octet that included Stanley Turrentine, Freddie Hubbard and James Spaulding. They raised their game during a session producer by Francis Wolff.

During The Right Touch, Duke Pearson’s music continued to evolve as he and his band combined Latin jazz, post bop and soul jazz. Critics hailed this as an almost flawless album and one of his finest albums. Duke Pearson was in a rich vein of form and it seemed could do no wrong. 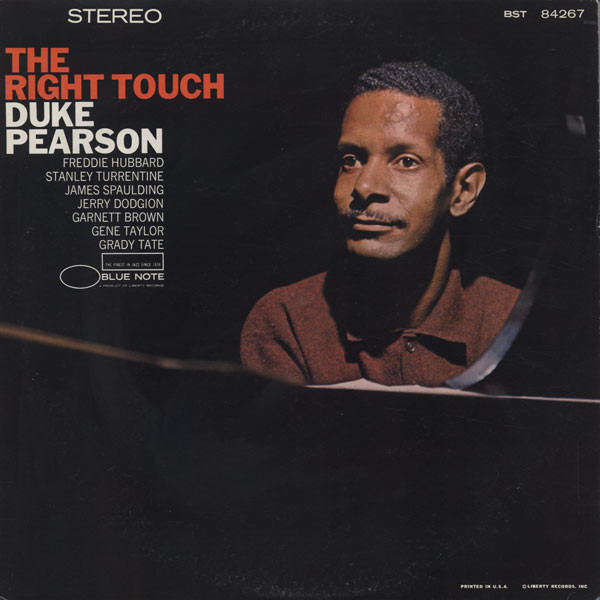 Having recorded albums with a trio, quintet, sextet, octet and nonet Duke Pearson decided to record an album with a Big Band. The album Introducing Duke Pearson’s Big Band was recorded at  Van Gelder Studio on December the ‘15th’ 1967 and this time, was produced by the bandleader himself. He had penned five of the nine track on the album which was a stylistic departure for Duke Pearson.

He was taking a risk by recording an album that was very different to the hard bop albums that had proven popular amongst jazz fans. His compositions on Introducing Duke Pearson’s Big Band were very different but just as memorable. It was a case of expect the unexpected, while his interpretations of covers were captivating and left a lasting impression. Introducing Duke Pearson’s Big Band might have been an experimental album, but it was also an album was the perfect showcase for the multitalented bandleader, composer and pianist when it was released in 1968. 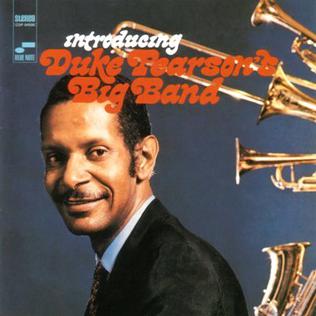 By the time Duke Pearson began work on his twelfth album The Phantom, he was an important figure at Blue Note Records. He had helped move the label in the direction of hard bop and shape the new sound in his role as producer. Duke Pearson had also worked as arranger and sideman at Blue Note Records. In 1963, he had played on Bobby Hutcherson’s album The Kicker. Now it was time for the vibraphonist to return the favour on The Phantom which was billed as Duke Pearson Featuring Bobby Hutcherson.

For what would be Duke Pearson’s twelfth album featured four new compositions including The Phantom, Bunda Amerela (Little Yellow Streetcar), Los Ojos Alegres (The Happy Eyes) and Say You’re Mine. They were joined by covers of Willie Wilson’s Blues For Alvina and  The Moana Surf which was penned by flautist Jerry Dodgion. He was part of the band that recorded The Phantom.

The first session took place at Van Gelder Studio on June the ‘24th’ 1968 when “Bunda Amerela (Little Yellow Streetcar) was recorded by the band. It feathered drummer Mickey Roker, bassist Bob Cranshaw, guitarists Sam Brown and Al Gafa plus pianist Duke Pearson. They were joined by Bobby Hutcherson on vibes and flautist Jerry Dodgion. Adding a Latin flavour was the percussion including congas played by Victor Pantoja and Carlos “Patato” Valdes who also played güiro. The result of this genre-melting album was recorded on September the ‘11th’ 1968 with engineer Rudy Van Gelder and producer Francis Wolff.

When The Phantom was released later in 1968, critics discovered another ambitious album from Duke Pearson whose music continued to evolve. It was an album of post bop where he continues his mission to push musical boundaries. To do this, he add a healthy sprinkling of Latin percussion and complicated  harmonies that were inspired by avant-garde music. This lesser musicians might have struggled to cope with, but most of the time this multitalented, experienced and versatile band cope admirably during this innovative and intriguing album.

The Phantom opens with the ten minute title-track where the groove simmers and smoulders adding more than a degree of drama and tension on this cinematic opus. It sets the bar high for the rest of the album.

Very different is Blues for Alvina which has a much more understated arrangement and finds the band adopting a less is more approach. Space is left as the flute dances across the arrangement and drums and congas add a subtle accompaniment. Duke Pearson’s piano has a slinky sound as it take centrestage on a track where blues, jazz and Latin music melt into one during three magical minutes.

Joyous and uplifting describes Bunda Amerela (Little Yellow Streetcar), which is largely because of the addition of the Latin percussion as the arrangement sashays along with Jerry Dodgion’s flute and Bobby Hutcherson’s vibes playing leading roles. Later, Duke Pearson’s fingers dance across the keyboard during a spellbinding solo where the bandleader and composer steals the show.

Los Ojos Alegres (The Happy Eyes) opens the second side of The Phantom and the Bossa Nova beat transports the listener to the Rio de Janeiro. Duke Pearson’s piano and then the vibes atop the the crisp beat during what’s akin to a slice of musical sunshine that’s sure to brighten up even the dullest day.

It’s all change on Say You’re Mine which first featured on Donald Byrd’s album The Cat Walk. It’s a welcome addition and is a beautiful, tender and dreamy track where Duke Pearson and the band paint pictures with music. It brings to mind walking hand-in-hand with the one you love on a rainy day. Other times, the music is ruminative and invites reflection and contemplation.

The Moana Surf closes The Phantom and has starts of slowly and almost hesitantly as the guitar and flute combine. Soon, a drum roll, stabs of piano and vibes signal that it’s all change as the tempo rises. Latin percussion is added and but it’s the flute that plays a starring role before the baton is passed to the vibes and then the piano. In doing so, this allows some showboating and band members to showcase their considerable skills. Later, drums, hissing hi-hats and percussion combine and take centrestage but maybe for too long? When the arrangement gradually rebuilds it comes as a relief. The band is reunited and soon the track reaches a crescendo bringing the album to a close.

The Phantom was another ambitious album where from Duke Pearson where he combined elements of avant-garde, Bossa Nova, Latin jazz and post bop. It was the next step in his career and saw his music continue to evolve. Sadly, the album wasn’t the commercial success he or Blue Note Records’ new owners Liberty Records had hoped. Despite that, he stayed at the label he called home.

That was the case until 1971, when Duke Pearson retired from his position at Blue Note Records. The label’s new owners had made changes and it was time for the thirty-nine year old to head for pastures new. Initially he taught at Clark College and in 1973 toured with Carmen McRae and Joe Williams. By then, the Duke Pearson Big Band was back in business and touring and things were looking good for its leader. Sadly, that wasn’t the case.

Later in the seventies Duke Pearson received a crushing blow when he was diagnosed with multiple sclerosis, and he died on August the ‘4th’ 1980 at the Atlanta Veterans Hospital aged just forty-two. That day, jazz and the wider musical community  was in mourning at the loss of a truly talented pianist, composer, bandleader arranger and producer who left behind a rich musical legacy.

This includes The Phantom, which although it’s one of the lesser known and sometimes overlooked album in Duke Pearson’s impressive back-catalogue. The Phantom, is anther ambitious album from the Atlanta-born pianist whose music was continuing to evolve when it was released in 1968 and is a reminder of the late, great and multitalented Duke Pearson. 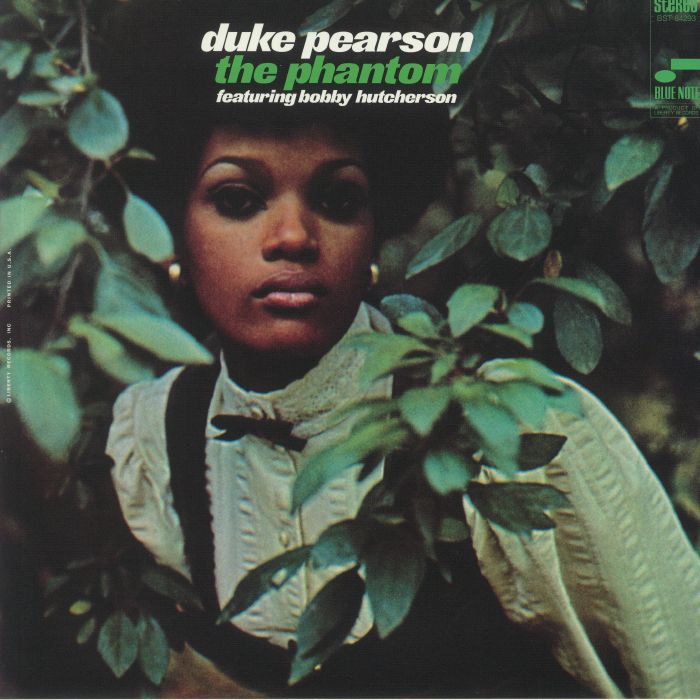