When Donald Byrd signed to Blue Note Records in 1958, he was twenty-five and had already recorded five solo albums and had collaborated on albums with Art Farmer, Phil Woods and Gigi Gryce.

The Detroit-born trumpeter was also in demand as a sideman and had already worked with some of the giants of jazz. This included Art Blakey, Hank Mobley, Horace Silver, Jackie McLean, jimmy Smith, John Coltrane and Kenny Burrell. Already Donald Byrd was regarded as one of jazz’s rising stars.

That was why Alfred Lion signed him to Blue Note Records. By then, Donald Byrd had already played on a number of sessions by artists signed to Blue Note Records and the label co-owner was able to witness the prodigiously talented trumpeter at close quarters. It didn’t take long before he decided to add him to the label’s impressive roster of artists.

Off To The Races.

On December ‘21st’ 1958, Donald Byrd journeyed to van Gelder Studio to record his Blue Note Records’ debut, Off To The Races. He led a sextet on an album of hard bop that was well received by critics when it was released in March 1959.

Just two months later, on the ‘31st’ of May 1959 Donald Byrd returned to Van Gelder Studio and his latest sextet recorded Byrd In Hand. Five of the six compositions were new including three penned by the twenty-six year old bandleader and trumpeter.

He was joined in the front line by tenor saxophonist Charlie Rouse and Pepper Adams on baritone saxophone on what was a hard blowing album of hard bop. The talented sextet’s playing was alway creative and with their solos spirited and inventive and a fine example of hard bop.

When Byrd In Hand was released later in 1959 to plaudits and praise. The album was regarded as one of the finest of Donald Byrd’s four year recording career. He had come a long way since making his debut with Art Blakey’s Jazz Messenger 1954 whilst studying for a master’s degree at Manhattan School of Music.

At The Half Note Cafe.

On November the ‘11th’ 1960, Donald Byrd headed to the Half Note in Manhattan, where he was about to record a live album. He was joined by drummer Lex Humphries, bassist Laymon Jackson, pianist Duke Pearson and baritone saxophonist Pepper Adams. This was a new band, but very few people would realise this.

That night, the quintet were at the peak of their  powers and firing on all cylinders during a spellbinding thirteen track set. Not only was the quintet swinging hard, but they benefited from a lyricism and impeccable sense of timing that few groups possessed. Led by twenty-seven year old Donald Byrd the quintet’s playing was practiced and slick. It was lucky that the tapes were running that night and the performance was captured for posterity.

When Blue Note Records released at The Half Note Cafe in 1960, it was as two single LPs. The albums were released to critical acclaim and hailed as Donald Byrd’s finest release for Blue Note Records. His next album Byrd In Flight had a lot to live up to.

For Byrd In Flight, which was Donald Byrd’s fourth album for Blue Note Records he penned Ghana and Lex. Duke Pearson who nowadays is regarded as one of the architects of the Blue Note Records’ hard bop sound wrote Gate City, Bo and My Girl Shirl. The only cover on the album was Rogers and Hart’s Little Girl Blue. It was one of six albums

Just like previous albums Donald Byrd recorded for Blue Note Records, Byrd In Flight was recorded at Van Gelder Studio. The engineer was Rudy Van Gelder and Alfred Lion took charge of the production. However, this wasn’t a one day session and the six tracks were recorded on three days between January and July 1960.

With the recording of Byrd In Flight completed, the album was scheduled for release by Blue Note Records in December 196o. When critics heard Donald Byrd’s latest album of hard bop they remarked that he was maturing as a trumpeter and bandleader while his music continued to evolve.

The journey that is Byrd In Flight opens with the celebratory sounding Ghana which conjures up images on a new nation determined to remain master of its own destiny. Donald Byrd’s flowing trumpet solo has an airy sound and is complimented by pianist Duke Pearson and Hank Mobley on tenor saxophone. His playing combines a degree of optimism with the celebratory sound that’s a feature of this opening track that was penned by bandleader Donald Byrd.

The standard Little Boy Blue is a fine example of ballideering from the twenty-eight year old trumpeter. His playing is thoughtful, considered but is also expansive, confident and strident. Meanwhile, Duke Pearson’s captures the romantic sound of this oft-covered ballad which was written by Rogers and Hammerstein.

The bluesy sounding Gate City finds Duke Pearson combining with Donald Byrd whose opening solo is unfussy but effective as he  effortlessly chooses the right notes. Then Hank Mobley takes a less is more approach to his solo while later it sounds as if pianist Duke Pearson really has the blues as he lives the music he’s playing.

Lex is a driving example of hard bop where there’s Donald Byrd plays with speed, power, passion and accuracy as he unleashes darting runs. In doing so, he displays an enviable agility. Meanwhile, Hank Mobley unleashes a breathtaking solo that careers along at breathtaking speed, while Duke Pearson playing is considered, sometimes economical yet uplifting as he joins forces with the rest of the rhythm section to ensure the track swings.

Bo is another bluesy sounding track where Jackie McLean’s playing is emotive and he compliments Donald Byrd. When his solo comes round he almost makes his trumpet talk while Duke Pearson’s playing graceful, ruminative and rootsy on this bluesy track.

Closing Byrd In Flight is the driving hard bop of My Girl Shine. It’s as Donald Byrd is determined to close the album on a high. He and Jackie McLean play with speed, power, ferocity although there’s always an expressiveness and emotiveness. Not to be outdone Duke Pearson joins the fun and more than plays his part in the sound and success of what’s one of the highlights of the album.

Just two years after signing to Blue Note Records Donald Byrd released Byrd In Flight in December 1960. By then, the trumpeter and bandleader had just turned twenty-eight and had been a professional musician since 1954.

Byrd In Flight was his fourth album for Blue Note Records and the ninth since his career began in 1955. It’s also the finest of the seven studio albums that Donald Byrd had released. That’s no surprise as he had matured as a musician and his music had developed over the past six years. On Byrd In Flight he switched between hard bop, Afro-Cuban, blues and balladry with the help of a tight, talented and versatile all-star band. They played their part in the sound and success of Byrd In Flight which  is without doubt one trumpeter and bandleader Donald Byrd’s greatest hard bop albums. 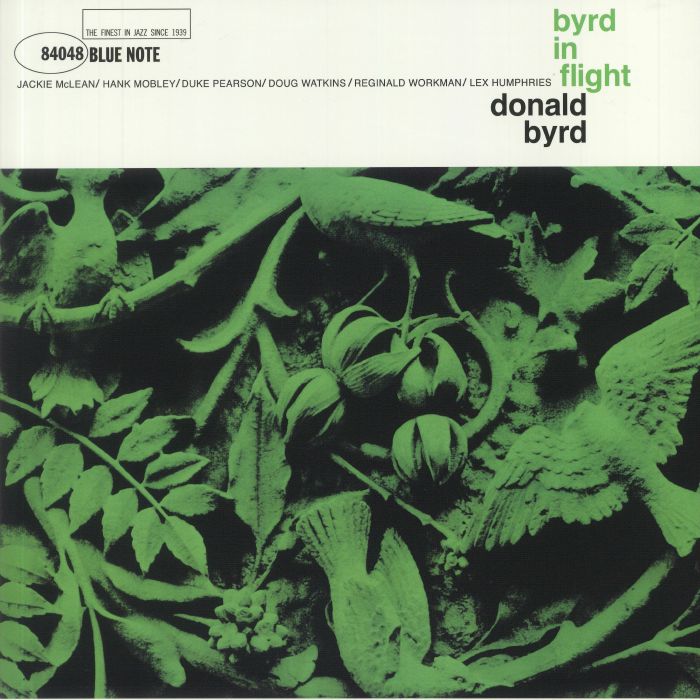