Alain Bellaïche was born in Tunis, the capital of Tunisia, but spent his childhood in Cannes, on the French Riviera which was where he discovered music and played his first concerts.

Initially, he played in friends’ houses where he was guaranteed a captive and appreciative audience. Soon, he had graduated to the local folk clubs where he continued to hone his sound and stagecraft. By then, Alain Bellaïche’s talent was apparent and he was already dreaming of making a living as a musician. That however was all in the future.

Before that, he journeyed to Paris where he enrolled at the influential and prestigious Ecole des Beaux-Arts in Paris. Having graduated, Alain Bellaïche continued his musical career and in 1973 headed to he left France and headed to America.

That was where his home for the next ten years and where he recorded two albums for David Geffen’s Asylum Records. The first album was a collaboration with a fellow countryman.

This was Metropolitain which was Alain Bellaïche collaboration with Alain Renaud of Heldon, the Paris-based progressive rock and space rock band. For the album, Alain Bellaïche had written nine new tracks and cowrote The Last One with Alain Renaud. The only cover version was Steve Winwood’s Can’t Find My Way Home. These track were recorded at Bell Studio, New February and March of 1974 in Bell Studio, in New York, with a tight talented band that included keyboardist Nils Lofgren, and the album was released later in 1974.

Billed as Alain Bellaïche avec Alain Renaud on Metropolitain, the pair fused elements of blues, folk, jazz, pop and rock on what was a vastly underrated album. Sadly, the album slipped under the musical radar and record buyers missed out on what was a carefully crafted and enchanting album.

After Metropolitain failed to find an audience, Alain Bellaïche began work on his debut solo album Sea Fluorescent. He wrote another nine new tracks which he decided to record at Bell Studio, New York during September and October 1975.

Joining Alain Bellaïche who played acoustic guitar, electric guitar, 12-string guitar, percussion and vocals during the Sea Fluorescent sessions was a small but talented band. This included drummer and percussionist Jean-François Fabiano who also played bells, cabasa, celesta, congas, maracas, triangle, tambourine, vibes and whistle. They were joined by bassist Wornell Jones and Jerry Goodman who played electric violin. Taking charge of the arrangements and production was bandleader Alain Bellaïche who spent the next two months recording his debut album. By October 1975 Sea Fluorescent was complete and ready for release in 1976. So was another album Alain Bellaïche had featured on.

Alain Bellaïche had joined Heldon in the studio when they recorded their fourth album. He only played on one track Perspective IV, which was a near twenty-two minute epic which was the highlight of Heldon IV “Agneta Nilsson” when it was released in 1976.

When Asylum Records were preparing for the release of Sea Fluorescent in 1976 Alain Bellaïche’s debut album sat alongside releases by Bob Dylan, Joni Mitchell, The Byrds and Tom Waits. He was rubbing shoulders with music royalty. The only problem was the music on Sea Fluorescent was very different and he had been influenced by Herbie Hancock, John McLaughlin, Led Zeppelin, The Spencer Davis Group and Weather Report. This resulted in what was an eclectic sounding album that referenced a variety of genres.

Opening Sea Fluorescent is California where the funky rhythm section are soon joined by Alain Bellaïche’s vocal powerhouse. It seems to have been inspired by Led Zeppelin’s Robert Plant. Meanwhile, the bandleader’s guitar veers between funky to rocky and references the West Coast. Later, keyboards are added to this memorable example of West Coast funk that whets the appetite for the rest of the album.

A lone acoustic guitar plays on San Andreas and is joined by vibes and a scatted vocal. What follows is a beautiful, dreamy cosmic ballad that is truly timeless and should be a favourite of compilers.

From the opening bars of I’m Angry there’s  more than a nod to The Who. Alain Bellaïche’s vocal is full of frustration and hurt at the betrayal he’s experienced. This is reflected in his scorching, searing guitar licks as the rhythm section drive the arrangement to this rocky anthem along.

The rhythm section and guitar combine before Alain Bellaïche’s impassioned vocal enters on Got My Place In The Country. He unleashes rocky and funky guitar licks as a walking bass is dropped in and out. Later,  Jerry Goodman’s electric violin is added to this genre-melting track. It features elements of jazz-funk, folk, fusion and pop-rock on a truly memorable song.

A strummed guitar opens Reggae and Western before the bass, drums and piano enter and the song starts to build. When Alain Bellaïche’s vocal enters it’s tender as he sings of leaving the city behind and being with the woman he loves. Backing vocalists accompany him on this cinematic ballad and soar above the piano-led arrangement.

Understated describes Spanish Roots as an acoustic guitar plays and weaves its way across the arrangement. At first it’s played gently but sometimes it’s played with power and passion. Just vibes accompany the guitar on a track that shows yet another side of Alain Bellaïche.

From  the get-go, it’s obvious that Foolin’ Myself is one of the album’s highlights. Alain Bellaïche delivers a soul-baring vocal and with his band combine blues, jazz-funk and fusion. His vocal is rueful, emotive and fool of regret as he sings of a relationship that broke up and the partner he loved, lost and can’t find now that he’s changed his way. When his vocal drops out blistering guitars punctuate the arrangement to this memorable and melodic tale of love lost.

Sun Blues is another short track where an acoustic guitar plays before an  impassioned vocal is added. Soon, it drops out and the before long track this quite beautiful track is at an end.

Closing Sea Fluorescent is the title-track which is an instrumental that lasts 6:30. It’s a case of less is more with a chiming guitar being joined joined by a bass that cuts through the arrangement which is punctuated by drums as cymbals rinse and hiss. Later, the sound of birdsong is added as this laidback and cinematic arrangement meander along as Alain Bellaïche saves one of the best songs on the album until last.

Sadly, when Alain Bellaïche’s debut album Sea Fluorescent was released by Asylum Records in 1976 it failed to find the audience it deserved. Part of the problem that the record company didn’t know how to market him? Alain Bellaïche was put in the Asylum Records’ catalogue beside Bob Dylan, Joni Mitchell, The Byrds and Tom Waits. However, his music sounded nothing like theirs. That was a mistake as Alain Bellaïche had honed his own inimitable sound.

On Sea Fluorescent, Alain Bellaïche flits between and fuses avant-garde, funk, fusion, jazz, jazz-funk and pop-rock and rock. Sometimes, the album heads in the direction of AOR and West Coast funk and there were the occasional forays in the direction of folk. Sea Fluorescent was an ambitious, innovative and eclectic album where the music was variously anthemic, beautiful, cinematic, melodic and memorable. It also showed the different sides to Alain Bellaïche who was a talented and versatile musician who should’ve gone onto to greater things. Sadly, it was five years before he returned with new music.

In 1981, Kirlian Effect released their epigynous debut single on the French label Carrere.  It found Kirlian Effect combining fusion and jazz-funk on Armadillo-Botafogo which featured a vocal from Alain Bellaïche. Tucked away on the B-Side was the hidden gem Chacha Emotionnel. However, history repeated itself when then the single failed commercially. It must have been a bitter blow for Alain Bellaïche given the quality of the music and sadly, he never released any more music after Kirlian Effect. It was his one and only single.

Just like many albums and singles that failed to find an audience first time round, a new generation of record buyers have discovered both Sea Fluorescent and Kirlian Effect which nowadays are rarities. Nowadays, original copies of Sea Fluorescent change hands for as much as $300.  It’s a much-prized and hugely underrated album.

Alain Bellaïche’s album Sea Fluorescent is a long-lost hidden gem which was recorded  during his ten year American adventure. Sea Fluorescent should’ve been the start of a long and successful solo career for Alain Bellaïche, but sadly, commercial success and critical acclaim eluded this talented and versatile singer, songwriter, arranger and producer whose  music is somewhat belatedly starting to find an appreciative audience. 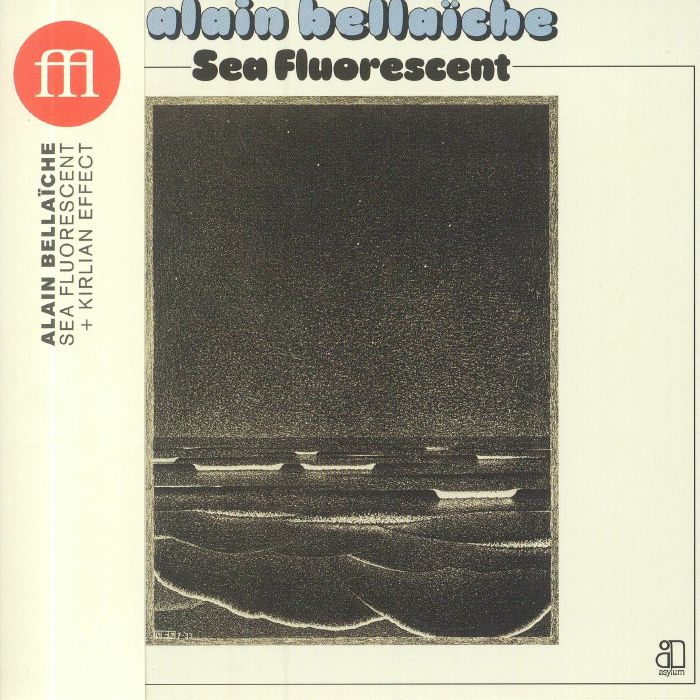