Ambitious, fearless, groundbreaking and innovative. These are just a  few of the words that describe the music of Norwegian improvisational musician Håkon Stene. His long awaited debut album, Lush Laments for Lazy Mammal, will be released on 14th April 2014, on Hubro Music. Lush Laments for Lazy Mammal marks a change in direction from Håkon Stene.

That’s no surprise. Håkon is one of the most innovative Norwegian musicians. For Lush Laments for Lazy Mammal, Håkon has combined music by British composers Laurence Crane and Gavin Bryars with a new piece by the influential Norwegian composer and improvisational musician Christian Wallumrød. The result in music that’s the polar of the music he’s  created so far.

Melodic, understated, ethereal, minimalist soundscapes describe the music on Lush Laments for Lazy Mammal. So does subdued, ambient, lush and wistful. This is far removed from the“noise-based” music Håkon Stene has been making. However, this won’t surprise anyone whose familiar with Håkon Stene’s groundbreaking music.

Throughout his career, Håkon Stene’s music has never stood still. That’s why he’s established a reputation as one Norway’s most inventive musicians. Recently, Håkon has focused on “noise-based” music. This is a fusion of musical genres, including avant-garde, drone, experimental and post rock. This is music that’s complex and contemporary. However, there’s more to Håkon than “noise-based” music.

Given his reputation as a groundbreaking musician, Håkon Stene has been in demand as  collaborator. He doesn’t restrict himself to one musical genre. No way. Instead he’s collaborated on baroque, electronica, folk and contemporary music projects. Eclectic describes Håkon’s collaborations which see him experiment with new instruments. This has resulted in Håkon becoming a versatile and inventive musician.

Over the last few years, Håkon has collaborated with baroque musician Rolf Lislevand and contemporary musicians Asamisimasa, who won a Spellemannspris, which is the Norwegian equivalent of a Grammy. Håkon collaborated with folk musicians Nils Økland and Benedicte Maurseth. Then in 2013, Hakon’s collaborated with German electronic producer Pantha du Prince and The Bell Laboratory’s 2013 album Elements Of Light. All of these collaborations were good experience for Håkon’s solo career.

When it came to recording his debut solo album Lush Laments for Lazy Mammal, Håkon turned his back on “noise-based” music. Instead, he decided to concentrate on harmony, melody and simplicity. So, Håkon dusted down the guitar he hadn’t played for nearly twenty years. Along with a piano, vibes, bowed marimba and keyboards, Håkon started work on Lush Laments for Lazy Mammal.

When it came to looking for material for what became Lush Laments for Lazy Mammal, Håkon was inspired by the work of two British composers, Gavin Bryars and Laurence Crane. They both belong to the English classical experimental scene. Gavin is the elder statesman. He was born in Yorkshire in 1943. His contribution is the eleven-minute epic Hi Tremolo. Laurence is a sixties child, who was born in Oxford in 1961. Six of the tracks on Lush Laments for Lazy Mammal were penned by Laurence. This includes Prelude for HS, Bobby J, See Our Lake I, Riis, Holt and Blue, Blue, Blue. Their music has been inspired by legends of the New York  School like John Cage and Morton Feldman and French composer Eric Satie.

As recording of Lush Laments for Lazy Mammal began in Oslo, Håkon was joined by Tanja Orning on cello, Hans Kristian Kjos Sorensen on cimbalom and pianists Heloisa Amaral and Christian Wallumrød. As for Håkon, he was like a one man band, playing piano, vibes, quarter tone vibes, bowed marimba and keyboards. That was the band that accompanied Håkon on Lush Laments for Lazy Mammal, which I’ll now tell you about.

Prelude for HS opensLush Laments for Lazy Mammal. Melancholy vibes reverberate into the distance, before a broody cello lingers. This adds to the wistful, subdued sound. The arrangement meanders along. A piano drifts in and out adding to the sense of melancholia.

Flourishes of piano open Hi Tremolo. It’s another pensive soundscape. Understated describes the introduction. The cello trembles and vibes play in the distance. Gradually, the arrangement grows and builds. Waves of dark music threaten to assail you. They never do. Instead, the piano and vibes play in tandem, teasing and toying with you. It adds to the moody, atmospheric sound as this eleven-minute epic reveals its secrets and hidden depths.

Melancholy describes the waves of music that open Bobby J. Having said that, it’s captivating and showcases Håkon’s ability to create innovative music. It’s a fusion of ambient, avant-garde, experimental and post rock. Waves of music wash over you. Their ambient beauty helps soothe your weary soul. The result is a track that epitomises minimalist music.

Riis sees Håkon look to his past for inspiration. The arrangement drones threateningly. That’s down to an acoustic guitar played with an e-bow. This allows Håkon to innovate and push musical boundaries. Almost menacingly, the arrangement meanders along. His “noise-based” music meets post rock, with a nod to ambient, avant-garde and experimental music. Bold, innovative and straggly melodic describes this futuristic opus.

Melodic and spacious describes Holt. Vibes and the cello combine. It’s a case of opposites attracting. The vibes add a spacey, melodic sound, while the cello is dark and gothic. Somehow, they combine beautifully as the arrangement meanders along dreamily.

Sit has a futuristic, ambient, sci-fi sound. Instruments flit and flutter in and out of the track. Some play starring roles, others play minor roles. You’re aware of their presence. Quivering, shivering sounds flutter below the mainstay of this thoughtful, dark, futuristic soundscape.

The piano led Low Genths sounds not unlike a homage to John Cage. Ambient and veering towards discordant and experimental, it’s a challenging listen. Ambitious and avant-garde, sometimes, it’s the musical equivalent of Primal Scream Therapy. Other times, briefly, calmness descends. This is just a brief interlude before Christian continues pounding his jangling piano. It’s akin to a cathartic outpouring of emotion, where he seeks answers to questions he’s posed.

Closing Lush Laments for Lazy Mammal is Blue, Blue, Blue. Straight away, a sense of melancholy descends. Thoughtfully, Håkon plays his piano. He plays with care and tenderness. This is the case throughout this six minute cinematic track. Wistful and ethereal it’s like a lament for a time or a place. 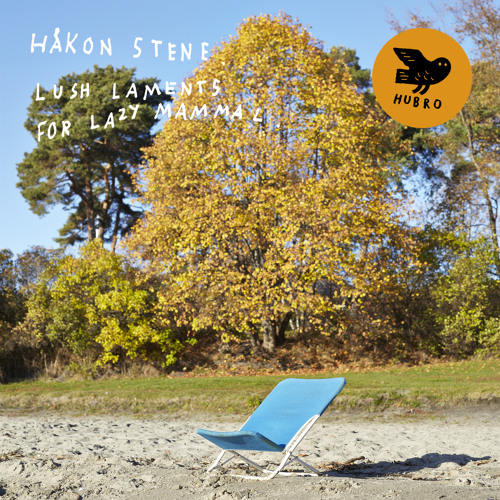