Country Funk 2 1967-1974 will be released on the 14th July 2014, by Light In The Attic Records. It features seventeen tracks. They were released between 1967 and 1974. The seventeen tracks are a mixture of familiar faces and new names.

Even people not particularly interested in country music will have heard of Willie Nelson, Kenny Rogers, Dolly Parton, Jackie DeShannon and Townes Van Zandt. Other artists however, many people won’t have heard of.

This includes the late, great J.J. Cale, who remains music’s best kept secrets. A hugely talented singer, songwriter and guitarist, J.J. wrote Cocaine, which gave Eric Clapton a huge hit. Although this gave J.J’s career a huge boost, he preferred to keep a low profile. As a result, he never enjoyed the commercial success and critical acclaim his music deserved. He’s not alone.

Bill Wilson released Ever Changing Minstrel in 1973. It was produced by Bob Johnson, Bob Dylan’s producer. Despite its undoubted quality, it failed commercially. So did Thomas Jefferson Kaye’s 1973 eponymous album. It featured Collection Boy. Thomas enjoyed more success as a producer, producing Gene Clark’s classic No Other. Thomas Jefferson Kaye, Bill Wilson and J.J. Cale are just a trio hidden gems on Country Funk 2 1967-1974. Indeed, there’s several more on Country Funk 2 1967-1974 which is a collection familiar faces, old favourites, hidden gems and rarities, which I’ll pick the highlights of.

Opening Country Funk 2 1967-1974 is Billy Swan’s 1974 cover of Don’t Be Cruel. It’s a track from his 1974 album I Can’t Help. It was released on the Monument label. A year later, Don’t Be Cruel. Billy slows the song way down, and combined gospel and country to create a covers that’s variously moody, sultry and beautiful. In doing so, he reinvents the track.

In 1969, Bobby Darin was now known as Bob. He’d just left Atlantic Records and decided to reinvent himself. Gone was the clean cut, preppy sound. Bob grew his hair and dawned denims and a cowboy hat. Country music it seemed, was the future for Bob Darin. Me and Mr. Hohner is a tantalising taste of his new sound. It’s a track from Commitment, his 1969 album, which was released on the Direction label. Seamlessly, Bob and his band combine blues and country. His vocal is a country drawl, while a slide guitar, Hammond organ and harmonica set the scene for him. The result is the rebirth of the man formerly known as Bobby Darin.

Hunger Child Blues was a track from Townes Van Zandt’s 1971 album Delta Momma Blues, which was released on the Poppy label. It marked a change in direction for Townes. His three previous album were influenced by Appalachian folk and country music. Not Delta Momma Blues. Instead, it was a fusion blues and country music. This is apparent on the galloping, blues-tinged Hunger Child Blues, which features a soul-baring vocal from Townes.

Thomas Jefferson Kaye only ever released a trio of albums. His debut was his 1973 eponymous album. Released on ABC/Dunhill Records it failed commercially. One of the highlights was Collection Box Blues. It’s a  fusion of blues, country and rock. The music is dramatic and emotive with strings adding the finishing touch to the track. Sadly, Thomas’ career as a singer was short-lived. He returned to his career as a successful songwriter and producer.

Don’t Let Me Down is a familiar track that’s been covered by many people, Written by Lennon and McCartney, it featured on The Beatles final album Let It Be. Dillard and Clark transformed the track on their 1969 album Through The Morning Through The Night. Jangling guitars, lush tinged and tight harmonies play their part in Dillard and Clark’s beautiful country-tinged cover of a Beatles classic. At the heart of the song’s success are Dillard and Clark’s needy, hopeful vocals.

Pay Day Give Away featured on Bill Wilson’s 1973 album Ever Changing Minstrel in 1973. It was produced by Bob Johnson, Bob Dylan’s producer. Despite oozing quality, it failed commercially. On Pay Day Give Away, Bill fuses influences. There’s country, rocky guitars, psychedelia and gospel tinged harmonies. Combined by producer Bob Johnson, Pay Day Give Away is a tantalising taste of a lost classic.

Light In The Attic Records have hit pay-dirt by including Dolly Parton’s Getting Happy on Country Funk 2 1967-1974. She’s just finished touring Britain and starred at the Glastonbury Festival. The anthemic Getting Happy is a track from Dolly’s 1974 album Love Is Like A Butterfly. It features a vocal powerhouse from a country legend.

Jim Ford was once described by Sly Stone as “the baddest white man on the planet.” His contribution is Rising Sign, the B-Side of his 1973 single. Bluesy and lysergic, elements of country, gospel and rock combine to create a trippy track.

Forty years ago, in 1974, J.J. Cale released his Okie, his third album. It saw J.J’s music move in the direction of country and gospel. One of the many highlights of Okie, which stalled at number 128 in the US Billboard 200, is Cajun Moon. It’s the perfect showcases for J.J’s sultry vocal and a guitar masterclass. J.J. was never a showy guitarist. Far from it. That wasn’t in J.J’s nature. He was a  languid, laid-back musician, who eschewed the trickery of a Jimi Hendrix. Instead, his playing was understated, sparse, but potent and powerful. On Cajun Moon, J.J. delivers a sultry vocal and a guitar masterclass, showing why he’ll forever be remembered as a musician’s musician. That’s one of the highest accolades a musician can receive.

Many people won’t have heard of Donnie Fritts. If they’re a fan of Kris Kristofferson, they’ll have heard his keyboard skills. He’s been Kris’ keyboard player for more years than he can care to remember. Originally, he was a session player in Muscle Shoals, Alabama. Briefly, he tried to forge a solo career. He only released two albums. His debut was 1974s Prone To Learn. It features Sumpin’ Funky Going On which epitomises what country funk sounds like.

Great Speckled Bird were a Canadian band who only released one album. That was Great Speckled Bird, which was released in 1970 on Ampex Records. One of the album’s highlights was Long Long Time to Get Old. It’s a fusion of blues, country and funk. Full of slick hooks, it’s a real hidden gem.

Willis Alan Ramsey’s Northeast Texas Women closes Country Funk 2 1967-1974. It’s a track from his 1972 eponymous album. It was released on Shelter Records and sadly, was the only album he ever released. Here, Willis and his band aren’t as tight as some of the bands on Country Funk 2 1967-1974. They’re certainly not sloppy. Instead, they’re a good-time band. Their slightly raucous, singalong sound, sounds like that would be sung late at a night in a Nashville honky tonk.

It’s not often that the followup to a compilation surpasses the original compilation. That’s the case with Country Funk 2 1967-1974. It features seventeen tracks. Familiar faces and some of the biggest names in the history of country sit side-by-side with artists who never sadly, enjoyed the commercial success and critical acclaim their music deserved.

This means that Bill Wilson, Thomas Jefferson Kaye and Willis Alan Ramsey sit side-by-side with Willie Nelson, Kenny Rogers, Dolly Parton, Jackie DeShannon and Townes Van Zandt. Somewhere in the middle, sits the late, great J.J. Cale. One of the most talented singer songwriters of his generation, J.J. should’ve been a much bigger star than he was. Sadly, that wasn’t to be. That’s a familiar story though. At least, another generation of music lovers have the opportunity to enjoy their music on Country Funk 2 1967-1974. 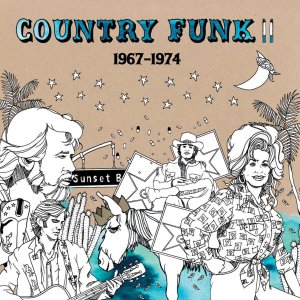